My Life As A Spy

Congratulations to "Kai", the winner in Nikki's giveaway. Thank you to all who participated!

Dressed to the hilt in a designer cocktail gown with a vodka martini in one manicured hand, I was hobnobbing at a friend’s Hollywood wedding reception the first time I heard the astonishing allegation.

“Oh, my dear! Tell me, do you work for the CIA?” the bride’s mother exclaimed, swooping down on me.  Several guests turned to survey me with interest.

I was caught flat-footed, not having realized my friends, family, neighbors and casual acquaintances harbor this collective misperception about my “day job.”  Only gradually have I become aware that everyone around me—from my parents to my devoted husband to the kids in his creative writing class—believes I lead a secret life of intrigue and high adventure.

Full disclosure:  In my other life, I’m a former diplomat who worked in Russia on weapons of mass destruction issues (really).  Although I still consult for government clients (not including the CIA), I’ve largely left that world for a new set of adventures as a romance author.

So it may be true that I live my life under three names:  the legal name I use in my government life, the pseudonym under which I write Tudor paranormal romance for a major press, and my Nikki identity as diplomat, playgirl, secret weapon and author of The Russian Seduction—which could be the last mistake I ever make.  But I strongly deny these allegations of a lurid career in espionage.  Really!

Still, no one seems to believe me. 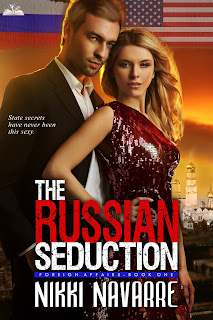 Victor Kostenko was the golden boy of the Russian Navy, a submarine captain with a maverick image, until he lost his command for an act of treason he didn’t commit.  Now it’s rumored he’ll do anything to get back in his government’s good graces.

Rising-star American diplomat Alexis Castle always plays by the rules.  She’ll torpedo her career for sure if she falls for a bad-boy Russian who breaks every rule in the book.
When a hard-line Russian leader invades a country the U.S. has promised to protect, war can only be avoided by one man who has everything to gain…and a woman who has everything to lose.

In this teaser from The Russian Seduction, my debut romantic suspense release set in the glittering cosmopolitan world of modern-day Russia, Victor and Alexis have just made contact in a private box at the Bolshoi Ballet.  It’s an unconventional locale for political negotiation, set up by Victor, that has Alexis pretty unsettled.  Her career rests on establishing a dialogue with the renegade captain, but each of them suspects the other of being an intelligence agent with a hidden agenda.  Given the risk that Victor is under orders to compromise her—not to mention the virtual certainty that they’re under surveillance—the sizzling chemistry between them is an itch she can’t afford to scratch.

“According to your dossier,” Alexis said huskily, “you’re an adventure junkie.  You’ve never met a risk you won’t take.  Isn’t that right, captain?”

“While you’re a model diplomat whose conduct in country is invariably flawless,” Victor breathed.  “However, I find continuing to address you as ‘Counselor’ while I’m inhaling your fragrance is something of a stretch, even for a man of my considerable talents.  Alexis…may I call you this?”

“Do you really think I’m such an easy mark?” she countered softly, far too conscious of his breath teasing her skin.  “This is about retaliation, isn’t it?  A little diplomatic ‘tit-for-tat’ for the stunt we just pulled on you.”

“Don’t you think that would be a bit obvious, even for my government?  You would be the very last woman I’d target, for precisely that reason,” he said calmly.  “And you can believe I’m the last man they’d use.  I’m in disgrace, or hadn’t you noticed?”

“Then why am I here?” she whispered.

Though she had to admit his arguments made a certain degree of sense.  Russian ops usually were quite a bit more subtle.  They were experts at the art of deception.  Besides, Victor Kostenko didn’t strike her as the kind of guy who’d perform sexually on demand, for the Motherland or anyone else.

“If you require a justification you can cable back to Washington, tell them tonight was about dialogue.”  His warm breath on her neck receded as he straightened.  “Opening a back channel for communication between our countries, yes?  If we…enjoy one another’s company in the process, this is not a crime.”

Sure and strong, his hands closed over her shoulders.  “The performance is ending, Alexis.  I’m going to take you someplace else now.”

“You know we can’t do that,” she said sharply, alarm flashing through her.  “Besides, there’s really no point prolonging this appointment.  I believe we’ve each accomplished our meeting objectives.”

“Speak for yourself,” he murmured, accent thickening.

Giveaway Alert!
For a chance to win a free copy of The Russian Seduction in print or ebook, submit a comment below.

Giveaway ends 11:59pm EST March 3rd. Please supply your email in the post. You may use spaces or full text for security. (ex. jsmith at gmail dot com) If you do not wish to supply your email, or have trouble posting, please email maureen@justromanticsuspense.com with a subject title of JRS GIVEAWAY to be entered in the current giveaway.
Posted by Maureen A. Miller at 12:30:00 AM