The Right Mix of Romance and Suspense

Thank you, Maureen, for having me back on your lovely blog. I’m truly honored. Last fall when I served as a guest author I spoke of incorporating family into love and suspense. Black Creek Burning is book one in the Black Creek Series and is the story of a man who comes back to scenic upstate New York to learn to be a better father to his nephews, not to fall in love and solve a murder. There is something to be said about the need to protect a child. 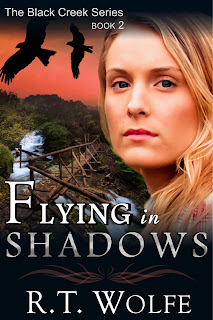 Book 2, Flying inShadows, is the story of Andy, one of the nephews. It covers three major time periods in Andy’s life as he grows up with his best friend, Rose.

Romantic suspense done right is no easy task. Without keeping on track, it is easy to fall too close to one or the other. Authors know how characters often have their own ideas of where a story should lead. In this friends-turn-lovers story, the suspense starts from when they are very young …

Andy and Rose are best friends from the time they were in grade school. Andy has an instinctual need to protect Rose … an instinct that proves to be well-founded. Rose won’t have anything to do with protection, however. Small but mighty, she can handle herself in a fight one moment, then gently care for the endangered animals she adores the next.

Andy has a quick tongue, quick feet and the build of a linebacker. As a teenager, he has terrible taste in women, a life-long dream of becoming a building and land developer and one thing in his life he won’t live without … his best friend, Rose.

Rose’s mother sacrifices everything to keep Rose hidden from her brutal biological father. But when Rose grows up to be the most upcoming doctor of conservation biology in the Northeast, her public appearances give away her existence to the man who can bring down everything.
Teenage mistakes, polar differences in lifestyles and a brutal extortionist who is looking for the daughter he never knew he had … it seems Andy and Rose have everything working against them.

The Black Creek Series takes place in scenic upstate New York in the fictitious smaller town of Northridge. The actual creek in the series was given its name both for the dark color of the mud on its floor and metaphorically for the events that happen in and around it. I hope you give the series a try. It is $3.99 on Amazon and Barnes & Noble and is due out at iTunes any day now. Book 1 is more of a prequel. You won’t miss out if you read 1 and 2 out of order (said from a woman who is neurotic about doing that-lol).

Thank you for having me here today, and I hope you had a Happy Valentine’s Day!


BIO:
R.T. Wolfe is the author of the Black Creek Series set in beautiful upstate New York. She enjoys creating diverse characters and twining them together in the midst of an intelligent mystery and a heart encompassing romance.

It’s not uncommon to find dark chocolate squares in R.T.’s candy dish, her Golden Retriever at her feet and a few caterpillars spinning their cocoons in their terrariums on her counters. R.T. loves her family, gardening, eagle-watching and can occasionally be found viewing a flyover of migrating whooping cranes.


Walking in the dark, Andy readjusted his tackle box. Moonlight shone on the dark ripples creeping down Black Creek. He spotted a raccoon as he crossed the bridge. Startled, the animal hissed at him. Andy stomped his foot and hissed back; he was in no mood for it.
In his peripheral vision, he saw movement Larger movement. A man? The shape disappeared as quickly as Andy imagined it. When you let yourself get this worked up, you start seeing things, he chided himself.

She would calm him down and lighten his mood, help him feel normal again. He looked at his watch and winced. What were friends for if you couldn't count on them to be there? Even at this time of night. Or morning.

* * *
Rose slept soundly in her twin bed dreaming of her favorite spot at the zoo. In the small rain forest building, she allowed a newly emerged monarch butterfly to dry its wings on her apron while sharing facts about the insect to one of two visiting young boys. The other threw pebbles into the nearby wishing pond. The sound of the small rocks plunked as they hit the stone wall before dropping into the water.

Oh, crap. She woke and sat up straight. The plunking noise came from outside, not in her head.
Heart in her throat, she ripped off her blankets and hustled across the hard floor to the window. It was still pitch-black out.

Grabbing the flashlight she always kept on the windowsill, Rose paused for moment. She shook her head assuring herself it was Andy and lifted the window. She found him with the beam as she hissed loudly, “I thought you didn’t get home until tomorrow.”

"It is tomorrow." He held up fishing poles and tackle box.

"It's not tomorrow until the sun comes up." Tugging on a pair of jeans, Rose smiled wildly to herself. This reaction she had to Andy Reed had to stop. It was not healthy.