Congratulations to "Suzie", the winner of P.J.'s giveaway. Thank you to all who participated! 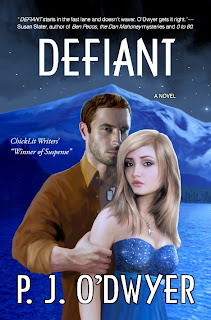 Western Maryland farm girl Kate Fallon wanted more than horse pastures. Now a trial lawyer in the affluent Annapolis law arena and married to multi-millionaire Jack Reynolds, also the U. S. Attorney of Maryland, she’s got it all—at least everyone thinks so.

Behind closed doors, Jack is as cruel as he is intelligent, as controlling as he is handsome. When his tirades turn physical, Kate must fight for her life. But her efforts to leave him will take her down a rabbit hole to secrets she doesn’t fully understand, and that Jack will kill to suppress.

Two years later, Kate’s keeping secrets of her own. Living as Charlie Robertson, a take-no-crap general contractor, she’s secure most days knowing her nightmare is right where she left him—two thousand miles due east under FBI scrutiny. Wielding a nail gun instead of a briefcase suits her, as does the small mining town of Creede, Colorado. With its scenic views and open spaces, life is simple and so are her rules: Lock all doors, check for signs she’s been followed, and don’t get involved romantically ever again.

Unfortunately, retired Navy SEAL and tourist Nick Foster didn’t get the memo. Mysterious, sexy, and powerfully attracted to Charlie, Nick typically likes things easy. Only “easy” isn’t in Charlie’s vocabulary, and neither is trust. Worst part is, she’s right not to trust him, and yet he can’t help falling for her. But love won’t save either one of them if she discovers his true identity or doesn’t give him what he came for. His boss won’t tolerate failure.

EXCERPT:
He pushed her hair behind her ears, his warm, soulful eyes intent on her face. “Relax.” He reached down to her arm and touched the bandage around her left elbow and started to unwrap it. The movement of his wrist, and the masculine, black, waterproof diver’s watch he’d worn since she’d met him tantalized her. She struggled against the warmth growing inside her, the more his tough-guy fingers worked the bandages free.

His hand stilled under hers. He brought his head up, brows furrowing over a pair of gorgeous blue eyes. “I want to.” The slight rasp of his voice made her go all shivery.

She rolled her lips in and allowed him to continue. He moved closer, his flat stomach pressed to the granite countertop, with him between her thighs, heat racing through her. He let the last bandage fall to the floor and ran his fingers up her arms, examining the puncture wounds. “How often do they have to take your blood?”

His head rose, his eyes intent and holding hers.

Charlie caressed the strong angle of his jaw. “You’re staring,” she whispered.

“If things were different . . .” He angled his head, the warmth of his mouth suspended over hers like a spell, and then broke it when he rested the side of his rough face against hers, his lips grazing her hair and ear beneath. “You better go upstairs before I do something stupid.” The heat of his lips and the way the words ripped from his throat—low and harsh—made every nerve ending tingle. She wanted to tempt him—tempt herself. She pulled her face away, her eyes lingering on the hard angles of his face.

He took her by her waist, the pressure of his hands making her more aware of his strength. Serious blue eyes searched her face. “It won’t stop with a kiss,” he said, the words rough and, maybe, a little angry.

AUTHOR BIO:
P. J. O’Dwyer is an award-winning author of romantic suspense and an active member of Romance Writers of America. When asked where she gets her story ideas, she laughs ruefully and says, “It helps being married to a cop.” She lives in Maryland with her family. Visit her website at www.pjodwyer.com or www.blacksirenbooks.com.


GIVEAWAY:
Please leave a comment or email to be entered to win your choice of either an autographed hardcover or an “Authorgraphed” Kindle edition of Defiant or Relentless. 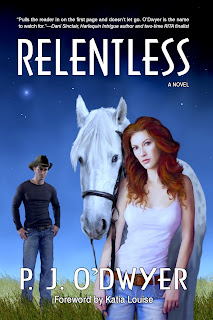 Headstrong horse rescue director Bren Ryan has been a red-headed streak of trouble for more than one man in Clear Spring. She’s grown up needling local “kill buyer” Wes Connelly, and since the sheriff ruled her husband’s sudden death an accident, Bren’s been investigating things herself. She’s certain Tom was murdered, and she’s hell-bent on cornering his killer the only way she knows how—by tempting him to do it again. And she’s the bait.

Rafe Langston came to Maryland looking for land and a fresh start. Or so he says. The sexy cowboy isn’t generous with details, but Bren couldn’t care less—until he buys half her farm at auction and moves into her childhood home. Suddenly, the last man she should befriend becomes her only ally in solving her husband’s murder.

Soon their cozy stakeouts sizzle with unexpected desire neither one can ignore, threatening his mysterious plans and her promise to never fall in love again—especially with a handsome stranger whose secrets could shatter what family she has left.


Giveaway ends 11:59pm EST Feb. 19th. Please supply your email in the post. You may use spaces or full text for security. (ex. jsmith at gmail dot com) If you do not wish to supply your email, or have trouble posting, please email maureen@justromanticsuspense.com with a subject title of JRS GIVEAWAY to be entered in the current giveaway.
Posted by Maureen A. Miller at 12:30:00 AM