Congratulations to Sandra. G, Mary P., Cindy W., Sandie W. and Kai, the winners in Cathy's giveaway. Thank you to all who participated!

A new beginning appeals to us. A clean slate. No baggage dragging us down. A fresh chance to “get it right.” So often with romance, when we mention a new beginning, we think about the thrill of a new relationship, the heart-stopping excitement of connecting with someone new. But what about the depth of an existing relationship? The years of shared experiences and ties that transcend mere attraction? 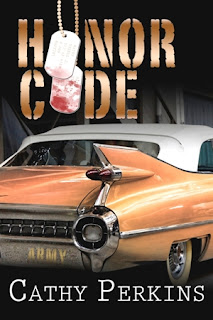 In my recently released novella, Honor Code, Detective Larry Robbins tries to create a new beginning for his marriage. After twenty years, the kids are grown and launching into their own lives. Larry and Sharon wrestle with a new stage in their relationship, redefining roles and expectations.

This theme appealed to me as my children launch into their adult lives and my husband and I refocus our relationship—on each other. This mature love allows for a deeper intimacy—and the best kinds of romance!

As a set up to the excerpt below, Larry Robbins has been working long hours, deeply involved with yet another case. The old man he’s trying to find has a sixty-year marriage which by all accounts was filled with love. Larry tries not to be envious of their bond and initially blames his wife for the tension in his relationship. But during the investigation, a wise old woman reminds him it takes two to create friction—or a good relationship. So, earlier in the afternoon, Larry has tried to think of things that will make his wife happy and improve his home life.

Another new beginning for me – it’s my birthday! To celebrate I’ll give the presents to you. I’ll give away five eBook copies of HONOR CODE. Just leave a comment answering this question:

What have you done recently to improve your current relationship?

Here's an excerpt from Honor Code:

Robbins stopped at Grunder’s Café—Sharon’s favorite restaurant. He picked up the to-go dinners he’d ordered earlier that day and placed them on the back seat where they wouldn’t get knocked over. He caught himself smiling and humming a line from some song as he threaded through back streets and cut over past the cemetery. The smile left his face as the graffiti-tagged wall mocked him.
Robbins glared at the offending bricks. People were upset about the vandalism. Spray paint anywhere was a nuisance. Spray painting a cemetery—that was just low. He hoped the judge’s sentence for the offender—and they would catch whoever did this—included scrubbing the wall clean.
Another few turns and he entered his neighborhood, trying to recapture the good mood he started home with. Surprises for his wife. She’d be happy. He might even get lucky.
He pulled into his driveway. The yard guy had done a good job, he noticed. The guy even edged the drive and sidewalk. A smile turned up the corners of his mouth. His plan was coming together. Sharon was home from work—her car was in the garage—but it was too early for her to have started dinner.
He was transferring the meals to plates when Sharon walked into kitchen.
“Larry? What are you doing home?” She eyed the plates and takeout boxes. “What are you doing, period?”
“I want to have dinner with my wife.”
He saw confusion, and maybe a little suspicion, in her face. He dropped the serving spoon into the container, and arms crossed, leaned against the counter. “I know I’m not the easiest guy in the world to be married to. I have unpredictable hours and a stressful job. But I want us to work. Our marriage. For you to be happy.”
Sharon looked at him for a long silent spell. Long enough that he nearly started to sweat.
“I miss the kids. A lot.” She dropped her gaze and he hoped she wouldn’t start crying.
Again.
This wasn’t how he’d envisioned the evening working out.
Finally she raised her head, a smile plastered across her face. She crossed the kitchen and draped her arms around his neck. “You’re a good guy. A good father.”
This was more like it. He wrapped his arms around her waist, took a deep breath, and inhaled her perfume, her body scent.
“It’s going to take more than one dinner to turn you into a good husband.”
“It’s a start.”
She smiled for real. “It’s a start.”

Bio:
Cathy Perkins is a member of Sisters in Crime, Romance Writers of America and International Thriller Writers. She writes predominantly financial-based mysteries but enjoys exploring the relationship aspect of her characters' lives. Her suspense writing lurks behind a financial day-job, where she learned firsthand the camouflaged, hide in plain sight, skills employed by her villains.
Born and raised in South Carolina, the setting for HONOR CODE and THE PROFESSOR, she now lives in Washington with her husband, children, a 75-pound Lab who thinks she's still a lap-dog and a German Wirehair puppy.You can learn more on her website http://cperkinswrites.com

Giveaway ends 11:59pm EST Feb. 22nd. Please supply your email in the post. You may use spaces or full text for security. (ex. jsmith at gmail dot com) If you do not wish to supply your email, or have trouble posting, please email maureen@justromanticsuspense.com with a subject title of JRS GIVEAWAY to be entered in the current giveaway.
Posted by Maureen A. Miller at 12:30:00 AM