Congratulations to "Maureen C.", the winner of Winter's giveaway. Thank you to all who participated!

Writing about cops has been a passion of mine. Writing about a cop who reluctantly falls in love is a topic of deep interest to me. The fact there is a Romantic Suspense/Thriller genre for me to write in makes it better. I've spent years gleaning, researching, and consulting men and women who work or worked in law enforcement to make my detective character as realistic as fictionally possible. 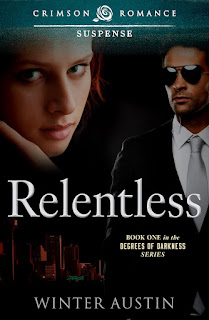 The main character of my series Degrees of Darkness, Detective Remy LeBeau could be considered a cops cop, but he has seen a side of the job that leaves him seriously jaded. He might do his work within the confines of the law, but when pushed far enough he can cross the line. He trusts no one and keeps his partner at arm’s length. Remy has seen enough evil brought about by humans on other humans that he's lost faith in the goodness of people. He walks a fine line between the psychological stages of disenchantment and full-blown cynicism.

So what makes him different than any other fictional tortured cop hero? Well, let me see if I can sum it up.

First thing I avoided with Remy that tends to be typical of cops at this stage, is drinking. He won't touch liquor, it dulls his senses and puts him at risk for anything. Because the last time he drank he lost the most precious thing in his life. (This is a bit of a spoiler, so if you read the book you’ll learn what that precious thing was.)

Remy is determined to solve his cases, no matter the cost to him personally. As a result he has a higher case closure rate—granted this isn't the case in real life, but after all this is fiction. His dedication to putting the dead to rest and giving families closure has resulted in a department nickname of Iceman, because he approaches the cases with a heart of ice. (Yes, I do use superhero references with the cops in my books.)

He avoids any and all casual relationships with women. He won't be left vulnerable again. Until the heroine, Cody Lewis enters his domain and then all bets are off. Remy is a charmer, a bit of flair I pulled in from his Cajun upbringing.

Everyone pretends to be something they're not. But Remy must. In an effort to protect any lasting connections to himself in New Orleans, he's had to bury his Cajun heritage, his accent and his native language. His past is gone. Remy has polished himself into a person he wasn't sure he wanted to be. And little by little, Cody starts to unravel his finely woven web of lies.

There's more to Remy LeBeau, and if you stick with the Degrees of Darkness series, you'll find out just what makes this displaced Cajun detective really tick.

Remy paused in the stadium exit to suppress the grin playing with his mouth. Flames
had lit up Cody’s eyes when he taunted her about being the best. Apparently, she didn’t like having her boasts thrown back at her. The cowgirl needed someone to keep her on her toes.

Hopefully the ME had arrived before the rain. Remy peered through the deluge at the long, white horse trailer hooked to a cherry-red extended cab truck. It appeared someone was inside. Upturning the collar of his coat and hunching his shoulders, Remy jogged across the lot.

He circled to the back of the trailer and entered, keeping a good distance back. A man in a blue ME jacket knelt beside the victim sprawled on the rubber-matted floor. The air was filled with the stench of blood, death, and manure. Remy preferred the manure.

The ME shifted, and Remy smiled. “Ahh, my favorite doc on duty.”

Dr. Rick Warner glanced over his shoulder. “LeBeau, ’bout time you got here.”

“I’ve been interviewing witnesses.” Remy crouched to Rick’s level. “Why are you
here? Don’t you usually leave the dirty work to your underlings?”

“Well, what do you have on our victim so far?”

With a surgical-gloved hand, Rick flipped through his clipboard. “We have a female, age between twenty and thirty, multiple stab wounds, no identification, with a time of death approximately four hours ago. Don’t quote me on that, can’t get a good reading.”

He let the papers fall back in place, as an odd expression lined his face. “I need to show
you something.”

Shifting to the victim’s side, Rick carefully rolled the body on to its side, revealing a
single crushed red rose.

Dallas homicide detective Remy LeBeau trusts no one. He hides from a past that could kill him and anyone involved with him. What he’s not prepared for is the return of an elusive serial killer . . . and an unwanted desire to protect a witness at all costs.
Professional barrel racer Cody Lewis’s dream of being top in the nation is within reach until she discovers a murdered woman in her horse trailer. The event pulls her into the sickening world of the Rodeo Sweethearts serial killer—a madman who terrorized Dallas’s rodeo circuit five years prior and is now back for more. But what’s worse is that Cody fits the profile of the Rodeo Sweetheart victims. . . .
As Remy dives into the investigation, he uncovers secrets of a botched investigation and a tight-lipped boss, while attracting unwanted attention from the killer. Battling his partner, his attraction to Cody, and the demons of his past, catching the killer could cost Remy everything. Even Cody’s life.
Romantic suspense
Sensuality Level: Behind Closed Doors
Author Bio:
Winter Austin resides in the mid-west with her Beta Hero, four mind-boggling kids, and a bevy of pets. When she’s not trying to kill her characters in some form or fashion she can be found in the kitchen creating another culinary delight.

Winter will be giving away an e-Book copy of RELENTLESS to one person leaving a comment or email.

Giveaway ends 11:59pm EST Feb. 12th. Please supply your email in the post. You may use spaces or full text for security. (ex. jsmith at gmail dot com) If you do not wish to supply your email, or have trouble posting, please email maureen@justromanticsuspense.com with a subject title of JRS GIVEAWAY to be entered in the current giveaway.
Posted by Maureen A. Miller at 12:30:00 AM