Congratulations to "Samgirl", the winner of Brenda's giveaway. Thank you to all who participated!

We've all looked at blissfully happy couples and thought “Why is he with her?” or “What does she see in him?” We've also been aghast when a couple we were certain would be together forever breaks up. Only the people inside the relationships know the truth.

I believe that is one of the lures of romance novels. We are given a front row seat as enduring love begins. We live it along with the characters, in a way we cannot share in real life. 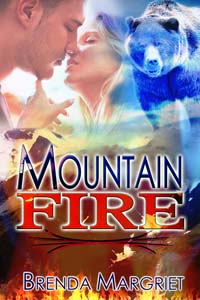 In my debut romantic suspense, MOUNTAIN FIRE, June Brandt, a natural resources student, meets Conservation Officer Alex Weaver when he is investigating the death of a grizzly bear. When one of Alex's colleagues is murdered, June and Alex must work together to find the poacher before other lives are lost. While the mystery is integral to the story, it is the relationship between June and Alex I wanted to explore.
On the face of things, Alex and June are well-suited for each other. They are both athletic, resourceful and dedicated to the environment. But June comes from a large, loving family, and wants that same experience for herself someday. Alex, on the other hand, has decided there is no such thing as happy-ever-after, and anyone who thinks so is deceiving themselves.

June must decide if she is willing to love Alex on his terms, without trying to change him. And no one is more surprised than Alex when he finds himself wishing for more than he believes possible.

Alex paced from living room to kitchen, glaring at the clock. He was as randy as a teenager, as nervous as a boy planning to get to second base, instead of a grown man waiting for a woman he admired, respected and desired. They were both adults, he argued with himself, both able to make their own decisions. If June hadn’t wanted to come tonight, she could have said so. Would
have said so. But when he remembered his actions in the office earlier, he flinched. He’d needed her, and still did, but had he come on too strong, been too insistent? She had told him she wanted a commitment. She had asked for more time to see where they were going together. And then he had practically begged her to sleep with him tonight. He scraped a hand across his chin, irritated
with himself.

June stood on the step, shifting the paper bag she carried from one arm to the other. She flicked a glance at him, not meeting his eyes. The sensations in his stomach had nothing to do with the delicious scent of Chinese takeout wafting in.

“Here, let me take that.” He reached for the bag, and when his fingers brushed hers she jumped like she’d been zapped with static. He pretended not to notice, and led her to the tiny dining nook.

A bottle of wine waited, uncorked, next to two thin stemmed glasses with elegantly wide bowls. Tall tapered candles shone with a steady glow. A single rose lay across one plate. She delicately caressed a velvety red petal.

Damn it, he was not blushing. He never blushed. He rolled his shoulders to relieve the tightness in his muscles. “I wanted to give you...something.”

She lifted the rose off the plate and brought it to her lips, his eyes following the movement. He swallowed. “I need to say something. About this afternoon. I think I might have pressured you.” He wished she would speak, but she only stared at him with those deep blue eyes, the rose near her mouth. “I don’t want you to feel like that. If you’re not ready, say so and...”

She slid the silky blossom against his lips, and he stopped.

“Thank you,” she said, and replaced the rose with her mouth.

Brenda is giving away an e-book copy of MOUNTAIN FIRE to one lucky commenter.  Tell her what you like best about romantic suspense!

Find out where to purchase MOUNTAIN FIRE in digital or print formats at www.brendamargriet.com

Giveaway ends 11:59pm EST Jan. 13th. Please supply your email in the post. You may use spaces or full text for security. (ex. jsmith at gmail dot com) If you do not wish to supply your email, or have trouble posting, please email maureen@justromanticsuspense.com with a subject title of JRS GIVEAWAY to be entered in the current giveaway.