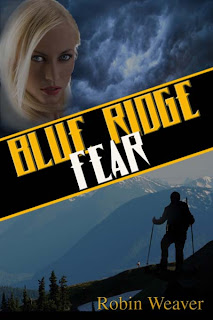 First, thanks to the Maureen for having me as a guest author on Just Romantic Suspense.  I’m truly honored.
As a writer, my characters talk to me on a regular basis.  Today, I’m going to switch it up and let Sienna Sanders, the heroine of Blue Ridge Fear, talk to you.
Sienna Sanders is a graphic artist who faces a lawsuit for breach of contract—from her ex-boyfriend.   Broke and jobless, she is forced to cohabit with her airhead cousin in a too-small mountain cabin—a joint inheritance.
A hiking misstep leaves Sienna stranded until a hunky stranger comes to her rescue.  A zing of instant attraction convinces her he might be the one.  But there’s another “one.”  A psycho who’s already killed four women who look a lot like her.
Sienna decided anyone who’s read the book knows all her secrets, so Sienna  demanded a chance to expose MY foibles by interviewing me. The nerve. You can never control these pesky characters.  Anyway, here goes:

ME: Hmm.  I make a concerted effort to make my characters NOT like me. In your case, if I met a hunky man who might be a serial killer, I’d hightail it off the mountain in a Blue Ridge minute.

SIENNA:  How are we different?

ME: As Kathy Bates said in Fried Green Tomatoes: “I’m older and have more insurance.”
Also, I’d never eat a whole stack of waffles and then chase them with a Danish.  At least, not in public.

SIENNA: Do we have the same taste in men?

SIENNA:  Do we look alike?

ME: In my dreams. Actually, you look suspiciously like my daughter.

SIENNA:  Why let me be captured by a serial killer?

ME: Quit whining or I’ll feed you to the wolves next time.

SIENNA:  Do you fantasize about park rangers?

ME: Only the hunky ones.

SIENNA:  Would you live in a Blue Ridge cabin?

ME: Only if a hunky park ranger roamed the area.
Actually, I love the Blue Ridge Mountains and would love to own a cabin there.

ME: Not necessarily a cousin, but I think most people have a Bethany in their lives.

SIENNA:  Why did you drag me to Chimney Rock with a sprained ankle?

ME: I couldn’t exactly have your ankle heal overnight. If I had, you’d be a paranormal heroine instead of the star of a romantic suspense.  I sent you to Chimney Rock because it has an elevator.

SIENNA:  I’m really into physical fitness, love hiking and dancing. Why do you make me eat so unhealthy?

ME: Because I can’t.  It’s an author’s prerogative to live through her characters. Be glad I didn’t make you fat.

SIENNA:  Are you suspicious by nature?

ME: Absolutely not.  Why would you ask that? Who told you I was?

SIENNA:  Do you know how square square dancing is?  What possessed you to haul me to one?

ME: Because they tell authors to torture their characters. J
Actually, during one of my Blue Ridge trips, I was coerced to attend a local square dance.  It was surprisingly fun.

ME: Actually, you should ask “what?” not who.  We have a friend (male) who wears a lot of jewelry and I said to my hubby one day, “so and so” wears more chains than I’ve ever seen without a Doberman nearby (no, I didn’t actually say “so and so”).  Anyway, I liked that line so much, I created a character for it.

SIENNA:  Why do I only have one book when Subena has three? (For you real people, Subena is the heroine of Forbidden Magic and I find her a bit stuck-up).

ME: You sound like Bethany now.  Do I need to threaten you with wolves again?  (Note to the real people: Bethany is Subena’s whiny cousin).

Thanks for stopping by!  I will be giving away a digital copy of BLUE RIDGE FEAR to one lucky person leaving a comment.

“Who’s there?”
The noise hadn’t spooked her—the mountain forest hummed with activity.  It was the sudden silence that sucked the air from her lungs.  Someone, or something, hovered behind the dense foliage being deathly quiet.
Sienna Sanders sat alone at the bottom of Linville Gorge—one boot on, one boot off, unable to walk.  The injury to her ankle negated hours at the gym and more hours in kickboxing class.
Her gaze searched in every direction, but her eyes encountered only trees and vertical rock.  “Is someone there?”  Her voice quivered.
Where the hell is Bethany?
“Don’t be afraid.”  The masculine voice startled her from behind, jolting her rigid body off the ground.
She twisted toward the speaker, displacing her ankle from its elevated perch on a moss-covered boulder.  Her shriek echoed up the mile high gorge.
“Are you all right?”
She scrutinized the male who had emerged from the lush forest undetected.  She could have sworn the noise she’d heard came from the other direction.  “Yeah, sure.  I always sit on the rocks and scream at the wind.”
The quivering tightness in her gut directly contradicted her flippant words.  Her instincts told her he wouldn’t harm her, but being alone meant caution trumped instinct.
Sienna didn’t know if she felt relieved or more scared by his appearance.  She’d always considered herself an independent woman, but if a girl had to be rescued, he was the man to do it.  In baggy shorts and a chambray shirt, the man looked like an all-American hiker, the kind who posed for SUV commercials.  He certainly wouldn’t hurt anyone with his looks.  The man was the Godiva of eye-candy.
He squatted and reached for her ankle.  “Don’t,” she snapped.
“Just checking to see if it’s broken.  I won’t hurt you.”
“Yeah, right.  All hunky murderers say that.”
Giveaway ends 11:59pm EST Jan. 25th. Please supply your email in the post. You may use spaces or full text for security. (ex. jsmith at gmail dot com) If you do not wish to supply your email, or have trouble posting, please email maureen@justromanticsuspense.com with a subject title of JRS GIVEAWAY to be entered in the current giveaway.
Posted by Maureen A. Miller at 12:30:00 AM