Think of the Gentlemen of Scotland Yard as James Bond in a Bowler.

Congratulations to "Christine B.", the winner of Jillian's giveaway.  Thank you to all who participated! 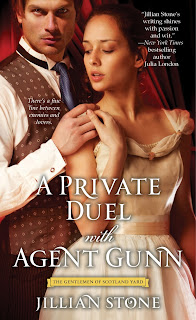 I’m very excited to be here today at Just Romantic Suspense to celebrate the recent release of A Private Duel with Agent Gunn. Thanks for inviting me!

Those of you who read or write Romantic Suspense, may or may not be familiar with The Gentlemen of Scotland Yard series, which is set in the gaslit streets of 1887 London.
For the most part, the books are often labeled as historical romance, and as such I am sometimes invited to participate in historical romance blog events.

I gleaned an interesting insight last month as I read a few entries in a Christmas Blog event hosted by Ramblings from this Chick and Not Another Romance Blogs. A number of historical authors were asked to contribute brief Christmas Eve stories. In my case, the theme was A Mission on Christmas Eve. Curious about some of the other offerings, I read a few others. Mostly, I concentrated on those authors who were assigned the same theme as me. Reading along, I began to realize, how different my story was, compared to the others.

The fact was, it hit me in the most shocking way possible, how gritty and edgy the Scotland Yard men were in comparison to the other dukes and damsels in distress. There just aren’t many prominent peers in my novels. My heroes tend to be wickedly street smart and sexy, and the heroines shockingly progressive young women. Suddenly, I walked the foggy gray streets of London alone, surrounded by ball gowns, soirees, and country manors.

Just to make sure I wasn’t overreacting, I reread my entry––a gritty, edgy tale about a detective laid up with a broken leg, who is on surveillance Christmas Eve. Well, what else is he going to do in a full leg cast? In the first paragraph of chapter one, he adjusts his binoculars, and observes a scene though an open window across the row. A prostitute loosens the ribbon on her chemise to disrobe for her customer...he mutters words of encouragement under his breath...

Of course there’s more––but in the interests of keeping this PG-13, I ask you to use your imagination! To make a long story short, right then and there, I realized I wrote romantic suspense that happens to be set in 1887. If you think about it, does anyone ever call Doyle or Christie’s work historical mystery? It seems to me, that a crime, espionage or suspense story doesn’t have to be contemporary. So. I’m warning you, from now on, when someone asks me what I write, I’m going to say, “Just romantic suspense.”

For those of you who aren’t familiar with the Gentlemen of Scotland Yard, let me give you a bit of background on the series. Several years ago, I got to thinking about Scotland Yard detectives. It seemed to me that Yard men were always portrayed as bumbling inspectors, five moves behind Sherlock Holmes. So I thought, what if there was an elite group of detectives? I began to do some research and found out that there was a division of Scotland Yard created in the 1882 called Special Branch. I added a dash–as in dashing–of James Bond gadgetry and that was the start of the Gentlemen of Scotland Yard.
Each novel features a new love story and crime to solve, so a reader can pick up the series anywhere As for my latest release? Cate and Finn's adventure begins with a double cross and crackles with secrets, lies and sexual tension. The crime is clear, breaking and entering each other's hearts, but as the clock ticks down, who will be the first to surrender?

Here’s a blurb for the just released, A Private Duel with AgentGunn:

Prima ballerina Catriona de Dovia lives the glamorous life of a starlet, filled with glittering jewels, sumptuous dinners, and admiring suitors. She’s grown up considerably since losing her heart to Hugh Curzon once upon a time, no longer wasting her emotions on the empty promises of charming gentlemen. On her own since the untimely death of her parents, she will do anything for the only family she has left: her brother, a notorious anarchist.

Scotland Yard Agent Phineas Gunn–sometimes known as Hugh Curzon–receives his new assignment reluctantly. He’s up for something a little more strenuous than playing nanny to a ballerina, until he sees who his charge is. Then, it’s a completely different story, because he’d been unable to forget the trusting, beautiful Cate since he had to leave her behind in Barcelona. And he suspects Cate is more than a ballet girl––in fact, she just might be a jewel thief, or even more arousing––a clever undercover operative.

Finn is determined to find out as the two race across the Continent–by land, by sea, even through the air by zephyr–it becomes uncertain who is keeping tabs on whom, and Finn and Cate must battle the sexual tension that snaps and sizzles between them every step of the way.

QUESTION FOR COMMENTERS:
Let’s face it, detectives are daring and dashing and full of awesome sauce! The Gentlemen of Scotland Yard work for Special Branch, which is the Victorian era MI-5 (FBI) or Homeland Security. James Bond works for MI–6 (CIA). What is it about British detectives and undercover operatives that is so attractive? I suspect it has something to do with a brilliantly sexy mind, and that custom tailored Savile Row suit.

I’m giving away a signed copy of A PRIVATE DUEL WITH AGENT GUNN to one lucky commenter today.

Jillian’s first book in The Gentlemen of Scotland Yard series, An Affair with Mr. Kennedy, won the 2010 Golden Heart for Romantic Suspense. The latest novel, fourth in the series for Pocket Books is A Private Duel with Agent Gunn. She also writes the Phaeton Black, Paranormal Investigator series for Kensington Brava.

Thanks again, to Just Romantic Suspense for inviting me to guest blog today.

Giveaway ends 11:59pm EST Jan. 10th. Please supply your email in the post. You may use spaces or full text for security. (ex. jsmith at gmail dot com) If you do not wish to supply your email, or have trouble posting, please email maureen@justromanticsuspense.com with a subject title of JRS GIVEAWAY to be entered in the current giveaway.