Congratulations to "Jaclyn L", the winner of Caridad's giveaway. Thank you to all who participated!

I love the challenge of it and even when I am writing one of my paranormals, that element of suspense somehow works its way into the story.  I guess that’s why THE CALLING/REBORN vampire novels are a series of my heart, because they are truly a blend of paranormal and suspense.

But as I discovered when writing THE CALLING/REBORN series, sometimes humans are much scarier than the monsters and that’s for sure in THEPRINCE’S GAMBLE where the humans are busy doing all kinds of nasty things, like money laundering, kidnapping, and selling women into slavery.  Having the good guys stop such activities is the proverbial battle of good vs. evil and one which readers just love in a suspense novel. 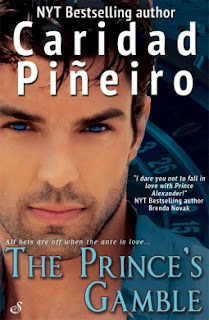 It was very interesting for me to research just how those things go on in casinos like the one where THE PRINCE’S GAMBLE is set.    It certainly gives me new perspective when my mother-in-law drags me down to Atlantic City for some gambling fun.  Luckily for me, since she does ask me to go with her, those visits gave me some real life experience with being in the casinos with all their noise and activity.  I love being able to include details like this in the books that I write so that readers can feel as if they are actually there.

I also love the love.   After all, we are talking about writing a “romantic” suspense and the conflict between the hero and heroine as the suspense drives them together is a very important part of any romantic suspense novel.

In THE PRINCE’S GAMBLE, FBI Special Agent Kathleen Martinez is asked to go undercover at Prince Alexander’s Russian themed casino.  The prince is worried that money laundering is going on and one of his attractive young hostesses has just disappeared, creating concern that she may be involved in the illegal activities.  The prince is royal, sexy and can cook both in the kitchen and bed.  A very dangerous combination for Kathleen as she pretends to be his lover in order to get close to the suspects in the case.

I had a lot of fun building the attraction and conflict between these two, especially since Prince Alexander is nothing like Kathleen expected.  Instead of a rich, uncaring and ruthless man, she discovers a very determined, giving and friendly man who wishes to be judged for what he has done rather than his family name.

I hope you will enjoy their story as Alexander and Kathleen risk it all to save the women enslaved by a local mobster.

Also, since THE PRINCE’S GAMBLE is set in Atlantic City, I am donating my share of the proceeds from sales of the book to the Hurricane Sandy NJ Relief Fund.  My hope is that we can start to get things back to normal so that all the people who live and work in the area can resume their lives.

Here is a little blurb about THE PRINCE’S GAMBLE:
Prince Alexander Ivanov is scrambling to save his reputation and his livelihood. One of the Russian Nights Casino's hostesses has disappeared, and his business is suddenly under investigation by the FBI for associations with the mob and money laundering.
Special Agent Kathleen Martinez has no patience with rich, entitled aristocrats, especially one like Alexander Ivanov whom she believes is involved in the vicious human trafficking ring which she'd tried—and failed—to shut down two years earlier. With a second chance to bring him to justice, she goes undercover in the casino, but instead of facing the villain she expected, she finds herself battling a sizzling attraction to the man.
Now, forced to work together to trace the source of the illegal activities, the danger—and the passion between them—grows out of control, and they slowly begin to realize the biggest danger isn’t to the casino, it’s to their lives…and to their hearts.

Here is a little excerpt:
Kathleen took a long, surprised look at the image in the dressing room mirror.
Tatiana had been recruited to help her get ready for tonight’s introduction to Petrov. Alexander had invited him to one of the premier events, an exclusive invite-only wine tasting, being held at Russian Nights that evening, and since it was a formal affair, Kathleen had to be dressed for the occasion.
The form-fitting merlot-colored gown and three-inch heels from one of the casino’s designer shops that Kathleen was expected to wear hadn’t been enough to please Tatiana. Alexander’s sister had insisted on a full beauty treatment at the spa, including a facial, haircut, pedicure, and mani.
The end result was a woman Kathleen didn’t recognize as she did a slow turn, stunned by the change. Liking it more than she thought she would, and yet discouraged as well.
This glamorous female in the mirror was the kind of woman Alexander would want in his life. A polished and primped and expensive woman. A woman she could never be, other than as her pose as the  [prince's current lover].
“I'm not sure this is a good thing considering how dangerous it is for you, but I think Alexander will have a stroke when he sees you and Petrov . . . let's just say he's dead if he doesn't notice you,” Tatiana said. She stood to one side of the dressing room, a conflicted look on her attractive face. A face that reminded Kathleen way too much of Alexander’s, with its coloring and perceptive blue eyes.
“Our relationship is not what you think, Tatiana.”
“Sure, Kathleen. Keep on saying it and maybe it’ll be true,” Tatiana teased, but then her cell phone chirped and she excused herself to deal with the call.
Kathleen shook her head and with a last look in the mirror, made sure the wireless earpiece was securely placed. A sleek black clutch sat on a nearby settee. Kathleen grabbed it and the familiar weight of her small pistol tucked inside reassured her.
That pistol and her job were what she was. Not this glittering and almost unrecognizable version of herself in the mirror.
A knock came at the door and she called out, “Come in, Tatiana. I'm ready.”
When she turned, however, it was Alexander standing there. A dangerous gleam entered his gaze as it danced across the new haircut, make-up, and dress.
“Ready for what, I wonder?”

Entangled Publishing will be giving away a digital copy of THE PRINCE'S GAMBLE to one lucky person leaving a comment.

Giveaway ends 11:59pm EST Jan. 21st. Please supply your email in the post. You may use spaces or full text for security. (ex. jsmith at gmail dot com) If you do not wish to supply your email, or have trouble posting, please email maureen@justromanticsuspense.com with a subject title of JRS GIVEAWAY to be entered in the current giveaway.
Posted by Maureen A. Miller at 12:30:00 AM