Dark Heroes and the Moral Code

Congratulations to "Izz", "Maureen" and "Stolhand" , the winner's of Misa's giveaway. Thank you to all who participated. 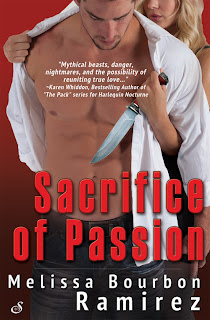 I’m a mystery writer.  My Lola Cruz Mysteries soft-boiled.  My Magical Dressmaking Mysteries with NAL (Deadly Patterns, the third in the series, came out in October) are cozies.

But I have a darker side.  I write romantic suspense novels based on different Mexican legends.  They’re much darker than my other books, and I must admit, I love them.  Love writing the.  Love rereading them.  Love how conflicted everything is in them.

Shifting from writing smart, sexy, sassy mysteries to small town cozies to darker romantic suspense novels sometimes makes me feel as though I have multiple personality disorder.  There's never a dull writing day, that's for sure.

When I began to think about a darker story, I automatically focused on the dark hero.  The damaged heroine.  And I got into Dexter.

I should note here that I'm a teacher, as well (Southern Methodist University with the creative writing CAPE program and Savvy Authors).  One thing I love about teaching is that it forces me to continue my own learning in new and unexpected ways.  Discovering a new (to me) television show and realizing it can teach me something about characterization, is thrilling.  I went through this with Supernatural (love love love those Winchester boys).  I went through it with Lost (rife with conflict, those plane crash victims were).  Went through it with Breaking Bad (Walter White is one heck of a conflicted cancer victim).  Am currently loving all the darkness and conflict in The Walking Dead and American Horror Story.  And then there’s Dexter.

If you haven’t seen Dexter, here’s the lowdown:

Dexter Morgan is a forensic scientist. He studies blood spatter. This television series is based on a series of novels by Jeff Lindsay, although, in the vein (no pun intended!) of True Blood, the series has taken on a life of its own.   My observations are based on the TV series, not the books.

The further into the shows I watched, the more I wondered: Is Dexter a Villain or a Dark Hero?

My take on Dexter is that he walks a thin line between being a dark hero and a villain.  This line is blurry and complicated; he is fascinating, which makes him an excellent case study.   One could probably write a dissertation on the subject, in fact.  The bottom line?  He's a layered character who does horrible things for all the right reasons.

The show has been great food for thought when it comes to crafting my own characters (for any of my different series), developing their layers and depths and figuring out how to build conflict into my stories (particularly in the romantic suspense novels like Sacrifice of Passion which are, by nature, dark).

When I develop a character, good or bad, I craft his/her moral code.  Even the darkest hero and the villain have a moral code.  It may be twisted or skewed, but it exists and in his/her mind and actions are justified because of the code.  I’ve always written this way, but the point was driven home as I watched the end of season one in Dexter.  We began to see flashbacks to Dexter’s adoptive father and the code he helped Dexter establish.  Harry’s Code.  It’s the guiding force in Dexter’s life, informing all of his decisions.  It’s his moral compass.

Dexter is an anomaly within humanity in that he doesn’t feel anything. He says he has a hole inside him where those feeling should go. If he could feel something, he’d care about his sister, also a cop.

Harry, Dexter’s father, steps in to help Dexter adapt to the world he lives in. He teaches him how to survive, kill effectively and efficiently, how to never get caught, and, on an emotional level, how to interact with the people around him so that he can fit in.

We all have our own moral code, we just don’t recognize it or live by it as intentionally as Dexter.  But when crafting a character, knowing his/her code can help you stay authentic to him/her.  When I was writing the third book in the Lola Cruz Mystery series, Bare Naked Lola, the mystery takes Lola to a nudist resort.  The big question was: “Will she or won’t she?”  Go naked, I mean.  See, Lola lives by a code of striving for gender equality, seeking justice, being true to her sexy, sassy, smart, kick-ass self, preserving her family’s culture within her life, and respecting herself and her family.  She’s also a good Catholic girl.  A few of these elements conflict when I tried to answer the question of whether or not Lola’ll take it all off in order to solve a case.

Harlow Cassidy, the sleuth in my Magical Dressmaking Mystery Series, has her own moral code, as well.  It revolves around the idea of justice, preserving the safe, small town Texas town she grew up in, and keeping family close and safe.  She's not an ends justifies the means kind of woman, but she is a go-getter, willing to put herself on the line if it's the right thing to do.
Just like in Dexter, people can make a choice to go against their code.  There are consequences to those decisions, and in a book, that’s exactly what you want.  If Lola doesn’t go nude, she upholds parts of her code, but sacrifices other elements.  If she does, she may solve the mystery, but will she respect the decision knowing what she did and how she compromised?  Does the end justify the means?

In Sacrifice of Passion, the killer, known as the Chupacabra (a mythical blood-sucking creature made of urban legend) lives by his own code and sees what he does as justified.  Skewed, yes, but authentic.

Now, Dexter’s backstory is important in framing who he is (as is the case for any dark hero...or any hero, for that matter). Dexter witnessed his mother being killed, which is the catalyst for his emotional emptiness. This also drives his bloodlust and desire to hurt those who are hurting others (as he does with a dog who constantly yaps and irritates his adoptive mother to the point that she can't sleep), thereby achieving a warped sense of justice. With Harry’s guidance, he develops the “Code”--to only kill those who “deserve” it (those who are killers themselves). The God Complex here is obviously huge, and the whole premise is layered with moral dilemmas.
Things get more complicated for Dexter as he continues to ‘role play’ his emotional attachment to the few people he pretends to care about (his sister, a girlfriend, and her / his children). The other fundamental conflict, or course, is that he works in law enforcement, yet he breaks the law--in a big way--every time he kills.  His secrets are close to being discovered more than once.

But from the beginning, we witness a process of humanization in Dexter because we understand why he is bereft of emotions, where that hole in him stems from, and when he begins to question his own code, we see his deeper moral dilemma. This character truly straddles the line between villain (because how do we ever condone a killer and this God complex?) and dark hero (because we see the good in his intentions). When he begins to recognize ‘real’ feelings within himself, the ambiguity of his ‘hero’ status deepens right along with his moral conflicts.

This is a fascinating, albeit violent and graphic, show (I cover my eyes... A LOT!). Despite the gruesomeness and violence, I love it, as I also love Breaking Bad, because this character is so fundamentally conflicted. The conflicts manifest in very unexpected ways. Watching both of these shows makes me really question and think about moral coded and values, applying what I know to my own characters and their development.

A great character, dark or not, will force us to look more closely at ourselves, to examine what we think and feel, and any character who can make us do that is well worth watching or reading about, and will, ultimately, help us as we build our own conflicted, real characters--no matter how light or dark the book.
◦          What do you think of Dexter (if you’ve seen the show and know the character)? Do you think he’s a villain or a dark hero?

I’m giving away three copies of Bare-Naked Lola today!  And be sure to visit my website and Facebook page for more information about my different series.

Praise for Sacrifice of Passion:

“Danger and a mythical beast, true love, and a curse – what a suspenseful, fast-paced story!”
- Karen Whiddon, Bestselling Harlequin Author

“Sacrifice of Passion will keep you up into the wee hours — and you
won’t regret one second of it. Not one.”
- Joyce Lamb, award-winning author of True Vision

“Melissa Bourbon Ramirez’s book breathes new life into the chupacabra legend, putting a fresh, original spin on this classic (and scary!) Latin-American myth (or is it?). Sacrifice of Passion has everything I want in a summer read: riveting suspense, a sigh-worthy romance, beautiful writing, and characters that jump off the page. You won’t regret putting Bourbon Ramirez on your auto-buy list.”
- Tracy Montoya, Daphne-award-winning romantic suspense author

Excerpt from Sacrifice of Passion:
Delaney West tossed and turned in her bed. Her head felt heavy on her pillow, darkness swirling in her mind. Fear settled deep in her core, whispering that she wasn’t alone. She thrashed her head back and forth. Tried to open her eyes but couldn’t, as if someone had glued them shut.

She could hear him now. The steady draw of breath. Close. The murmur of his voice. High. Crooning.

A smooth hand touched her belly. Slowly moved to her thigh. The other hand rubbed her shoulder. Slid down to her collarbone.

His murmuring grew louder, winding through the crevices of her brain, circling in and out like eels slithering through a cavernous underwater maze. Persistent. Demanding.

Lovely. So lovely. I’ll help you. I’ll take care of you.

Her mind whirled, battling against the fuzziness. This wasn’t who she was supposed to be with. Her lungs felt heavy. This man was not supposed to be here.

“Vic.” She felt her mouth move, but no sound came out. “Vic,” she mentally pleaded. “Where are you?”

She tried to move but felt chained to the bed. Could barely breathe. As if her body were paralyzed. A scream built in her throat, struggling for release.

She recoiled at that high voice.

Her heart hammered in her chest. The man lowered himself on her, trapping her.
“No!” Her empty voice tried to shout. “Stop!”

She flailed, and then like a rush of water funneling through a drain, the pressure lifted. And suddenly her eyes popped open.

She blinked, her breath ragged. Looked around. She was alone.

Through a haze, she saw her old trophies on the shelf above her desk. Her white vanity was littered with award ribbons from rodeo wins, and the teddy bear Vic had won for her at the town carnival her senior year leaned against the mirror.

But everything was hazy. Colorless. As if she was looking through a thin film of distorted gray gauze.

Something flickered in the corner. Shadows moved. Oh, God. Her breath caught. He was still here. Run!

Giveaway ends 11:59pm EST Jan. 9th. Please supply your email in the post. You may use spaces or full text for security. (ex. jsmith at gmail dot com) If you do not wish to supply your email, or have trouble posting, please email maureen@justromanticsuspense.com with a subject title of JRS GIVEAWAY to be entered in the current giveaway.