Congratulations to "Cris" and "Karen", the winners in Chris's giveaway. Thank you to all who participated! 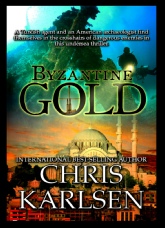 Please tell us a little about yourself, Charlotte.

I grew up in Chicago. My father was a Chicago cop. He’s retired now and my mom was a housewife. Other than my parents divorcing when I was a teen, I had a pretty typical and happy childhood. I have one brother, Nick, who is a Chicago cop too. He’s with the SWAT team there. I love him to bits and worry about him. It makes me crazy to hear him tell some of his dangerous SWAT details.

Nick couldn’t care less about history but I can’t remember a time that I wasn’t fascinated with the subject. I knew as a young girl of twelve I’d be an archaeologist. I was a little girl when the Indiana Jones movies were popular. I wanted to be the female Indiana but without the snakes and people shooting at me.

While in college, I decided to specialize in nautical archaeology. I now have my PHD and look forward to working on the recovery teams of new shipwreck discoveries. I start getting excited in the spring knowing the next dive season is only weeks away.

Is that why you live in Turkey?

Yes and no. You can’t throw a rock and not hit something historical in Turkey. The waters off the coast are beautiful and there are so many wrecks filled with artifacts to bring to the surface. To me, each ship has a unique story to tell. I love trying to uncover that story through the relics and the wreck remains.

That said; the main reason I live in Turkey is because the love of my life, Atakan Vadim, is there.

How did you meet?

Atakan is an archaeologist also but he’s employed as an agent for the Turkish Ministry of Culture. We met last year when he assigned as my dive partner on the recovery team of a Bronze Age wreck site. I’d been a witness to the death of the government agent originally assigned to the project. It was Atakan’s job to quietly investigate me and make certain I had no involvement in the man’s murder.

It took some time but we developed a friendship and trust between us. From there, one thing led to another and we fell in love.

When he’s not in the field working an archaeological site, he conducts investigations of smugglers dealing in the sale of illegally obtained artifacts to the black market. He and his investigative team work out of an office in Istanbul.

When not in the field, what do you do to stay busy?

I do preservation work with artifacts at a lab in Istanbul. I clean, identify, tag, and catalogue the relics.

You recently finished a project. Tell us about it.

A Byzantine Era warship was found off the coast of Northern Cyprus. The ship carried a cargo of gold, coins, jewelry, and religious objects. MIAR, the archaeological company I am associated with found this very curious. If it was a merchant ship, we’d expect that type of cargo but not on a Dromon, which is a ship meant for battle. Because it was so unique, the rich find received a good deal of publicity.

The publicity caused a major problem and put the whole team at risk. A cell of a terrorist organization found it more than curious. They decided it was too tempting to ignore. The valuable relics would bring them much needed funds. Their leader stole the identity of a diver assigned to the project and infiltrated team. To make things worse, he was assigned as my dive partner.

He was to be my partner but while we were on vacation in Paris, an old enemy of his, a man he sent to prison, came after Atakan. He shot Atakan as we walked down the street. Fortunately, it struck him in the shoulder. A few inches to the right and he’d have been killed. Atakan continued as the site’s Ministry representative, but the injury kept him from being able to dive.
Did you catch the man who shot him?

No, he escaped in Paris. Those months were a double nightmare for us both. We had reason to believe he followed us to Cyprus so Atakan’s life was at stake the entire time. Then, when we learned my partner was a terrorist, Atakan and another Ministry agent had to race the clock to capture the members of the cell before they could attack the camp.

When you’re not dodging danger, what’s life like for the two of you?

We like to travel. In the winter, we ski. In the warm months, right after the dive season, we enjoy staying places with lots of water sports.

At home we entertain fairly often. Atakan and I both are decent cooks so we have friends over for dinner a lot. We also have an apartment in a lovely location with a view of the Bosphorus. If the weather allows, we like to relax on the patio with a glass of wine and just watch the ferries as they come and go from the Asian side of the city to our side.

What would surprise people the most about you?

I belly dance and I’m not too bad at it. (Smiles)

What would surprise people the most about Atakan?

Outwardly, he appears stern and cold. But those who know him will tell you he is warm and outgoing with a wicked sense of humor.

I hope everyone will be intrigued to read about the dangers that surrounded this recovery project and Atakan, in Byzantine Gold.

About the author:
A native of Chicago, former police detective and now romantic suspense author Chris Karslen grew up with a love of history and books. Her parents loved traveling, a passion they passed on to her. She’s had the good fortune to travel extensively throughout Europe, the Near East, and North Africa.

Though her desire to write began in her teens, Chris spent twenty-five years in law enforcement with two different agencies before she decided to pursue her dreams. Chris is the author of the romantic thrillers Golden Chariot, Byzantine Gold and numerous other romance novels.
Now a fulltime writer, she lives in the Pacific Northwest with her husband, four rescue dogs and a rescue horse.

Learn more about Chris and her work on her website and blog.

Leave a comment for a chance to win a copy of the romantic thriller, Golden Chariot, the first book in the series. A ebook will be given in Kindle, Nook, Kobo or Smashwords to TWO winners.


Giveaway ends 11:59pm EST Jan. 30th. Please supply your email in the post. You may use spaces or full text for security. (ex. jsmith at gmail dot com) If you do not wish to supply your email, or have trouble posting, please email maureen@justromanticsuspense.com with a subject title of JRS GIVEAWAY to be entered in the current giveaway.
Posted by Maureen A. Miller at 12:30:00 AM