Congratulations to "Colleen C." the winner of Nikki's giveaway. Thank you to all who participated! 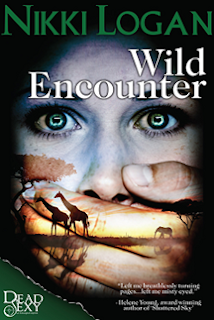 Today I’ve managed to score ten minutes in the company of the gorgeous Simon deVries, intelligence operative with London’s MI6/SIS. You might remember the story filling the British papers about eighteen months ago about the wildlife worker taken hostage in Africa by traffickers and rescued by a mysterious Agent-X? Well now that everyone involved has been brought to justice, Agent-X can speak more freely about those weeks and months.
Q. Simon deVries, thanks for your time today, I know you’re winding up a case. Before we get going I have to ask: what’s with the stitches? Is that a bullet wound?

[Laughs] Well, it’s bullet-related. Some tosser shot at me during an apprehension and clipped the wall next to my face. So what you’re seeing is your standard masonry-shard-meets-flesh laceration. Clare makes me put this awful gumph on it at night to speed it along. She tries not to gloat that it’s actually healing up pretty well.

Q. How is Clare? Are you guys managing to find time to be together with your respective workloads?

Yeah. She’s been pretty hammered pulling WildLyfe out of the drain but they’ve got it nearly back in shape now and the first wildlife projects are starting up again. But the good news for me is that’s kept her in London, with me, instead of roaming around some remote corner of the planet.

Q. I believe something else is going to be keeping her here soon… She’s pregnant?
[More laughter] I know. Can’t imagine how that happened.

Q. Am I going to have to explain this to you? [Okay, so at this point I have to confess there’s something insanely hot about having an SIS operative give you ‘the look’ especially through super-penetrating blue eyes. Once I’d managed to suck in some air, I hastily congratulated Simon.]

Thank you. This is a total deal-changer for both of us. In a really good, really terrifying way. No, seriously! Give me bullets and wall-fragments any day. The idea that I’m going to be responsible for an entire person…knowing what I know about the seedy side of the world…

Q. Are you hoping for a boy or a girl? [I think he actually paled here…]

Oh, God help me if it’s a girl. She will never leave the house. Maybe when she’s twenty. Then again, knowing what I know from first-hand experience about teenaged boys I may need to implant a tracking device under his skin so I know what he’s up to at all times. Whichever way it goes they’re going to rue the day they scored a Spook as a father.

Q. Speaking of tracking devices… How’s the Mzungu wild dog pack doing? [And can I just say I love how Simon sits forward for the first time at this point, caught up in his wife’s passion.]

Brilliant. They took a bit to settle in and there was a tussle for alpha between Jambi and Osumi for about five minutes but it all sorted itself out and the pack is about twice its size now. They’ve raised two full litters and they’ve not tried to leave the national park at all.

Q. Clare’s not itching to get back to Africa?

Oh, she totally is. She wants to go back and check on them before she gets too big to travel comfortably in the heat of the bush. But she’s also happy to give Africa and herself a bit of time out. It was a pretty dynamic year.

Q. Let’s talk about last year. Clare came across as pretty resourceful in the newspaper stories; is she as determined as she seems?

Determined. Yeah, that’s a kinder word for it. [laughs] She was a pain in my ass, always trying to outsmart us, getting herself deeper and deeper into hot water. But it was hard not to respect that even as she was bugging the hell out of me with her refusal to just let me protect her. It didn’t take me long to realise that’s just a big part of who she is. She seriously would have died rather than submit.

Q. She had no idea that you were helping her?

She knew I was trying to keep her alive.

Q. Did she know why? [That stare is so intense, I can see why he’s so good at his job. But emotional reveal is clearly not his strong suit, even now.]

She thought she did. So did I. Turns out we both had no idea what was really going on.

Q. I know. You guys fell in love. Guess you weren’t expecting that.

[Snorts] We were both there doing a job. Hooking up was never on the agenda for either of us. We were on opposite sides of that job for most of the time, too. But nothing about us getting together was normal, I don’t think we ever could have met just having coffee in a café or something.

Q. You wouldn’t have noticed her?

I totally would have noticed her, but I wouldn’t have gone near her.  She has this whole…capability thing going on. I would have read that and left her to read her newspaper and enjoy her coffee.

Q. But Fate took that out of your hands.

And I took my chance once I realised I had it. There was no way I was going to leave her in any kind of danger once I found her again. What I didn’t realise was that the feeling was mutual. She had my back the whole time.

Q. That surprises you?

Not that she’d do it… I’m just not that used to someone looking out for me in that way. In my game, your Partner is the person that guards your back, not a stranger that you’ve kidnapped off a highway.

Q. [Oh… for the first time a shadow crosses those expressive eyes] How is McKenzie doing?

Yeah she’s good… She took a transfer not long after the case wound up. She’s on the other side of the planet now, doing her thing. I have a new partner now and he’s pretty good but Mac left some serious shoes to fill. I miss her.

Q. [And even though I can sense there’s a story there, I’ll leave that one alone…for now.] Well, I guess I just wanted to wish you the best of luck with the Queen this evening. Is this your first Royal command?

I’ve been in a detail protecting HRH before, but I’ve never met her in person.

[Laughs] That’s exactly what Clare said. I promised her--and my superiors--I’d be the picture of appropriateness. Besides, the Queen awards commendations out all the time, she must have shaken much tougher and braver hands than mine.

Q. [And on that final note I reach out for the hand in question; tanned, large and powered by a cluster of well-formed muscles in his forearm, yet perfectly manicured and soft enough to want to keep hold of… If I wasn’t so terrified of incurring the wrath of his newly pregnant wildlife warrior wife.]  Simon, thank you for your time. Enjoy the Queen, enjoy your last months of uninterrupted sleep and I’ll keep my ear to the ground to hear whether you’re losing hair over a boy or a girl.

Nikki will be giving away an e-book copy of WILD ENCOUNTER to one person leaving a comment or emailing an entry!

A wildlife release mission in Africa turns deadly when the convoy is hijacked by smugglers, and veterinarian Clare Delaney is taken hostage. Terrified for her life and her animals, the intrepid Clare establishes a rapport with the man she believes is the criminals’ leader, and reluctantly finds herself under his protection...and falling hard for the enigmatic man.

Alpha-to-the-max Simon deVries sees right through his sexy captive’s attempt to seduce her way to freedom. So when their simmering attraction flares into true passion, it takes them both by surprise. Now he’s torn between completing his secret mission and letting her escape without telling her his true identity. He knows if he lets her go, he will be risking his career, his life...and his heart.
Purchase from Amazon

Nikki Logan lives amongst a string of wetlands in Western Australia with her long-suffering partner and a menagerie of furred, feathered and scaly mates.

She studied film and theatre at university, and worked for years in advertising and film distribution before finally settling down in the wildlife industry.

Her romance with nature goes way back, and she considers her life charmed, given that she works with wildlife by day and writes fiction by night–the perfect way to combine her two loves.

Nikki believes that the passion and risk of falling in love are perfectly mirrored in the danger and beauty of wild places. Every romance she writes contains an element of nature, and if readers catch a waft of rich earth or the spray of wild ocean between the pages she knows her job is done.


Giveaway ends 11:59pm EST Jan. 17th. Please supply your email in the post. You may use spaces or full text for security. (ex. jsmith at gmail dot com) If you do not wish to supply your email, or have trouble posting, please email maureen@justromanticsuspense.com with a subject title of JRS GIVEAWAY to be entered in the current giveaway.