Strong Women Of The Past

Congratulations to "Jane", the winner of Melinda's giveaway. Thank you to all who participated.

I’ve written a number of blogs on strong female characters. The other day, I was cleaning out a drawer and I stumbled on some old photos of my grandmother and her sister growing up. And I suddenly realized that I didn’t have to look anywhere except to my family to find women who kicked butt. If you were born during the 1920s, between the war, the depression, and disease, you were either tough or you didn’t survive. 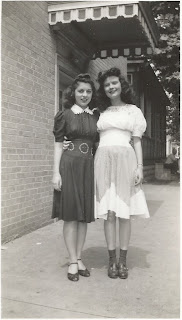 My grandmother and her sister were raised during the Great Depression. (The two girls standing on a street in Philadelphia circa 1940).  Their young lives were ruled by the golden rule of making due with what they had. But as my grandmother always said, “We didn’t know any different. Nobody else had any money either.”

She was always grateful because her family was one of the lucky ones. Even though they couldn’t afford luxuries like toothpaste, they never went hungry. Her father was a plumber and her mother was a seamstress. Between the two working parents, they had food, clothes, and shoes. Dresses were homemade, so were catsup and root beer and Christmas presents. A vacation was a rare day trip to the beach. (That’s them at the Jersey Shore, circa 1930.). Public pools were closed during the polio years. 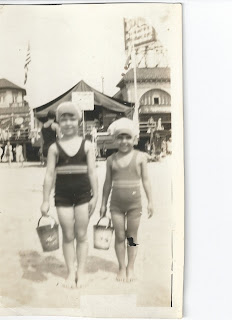 Growing up in hard times made strong women. When they got older, they sent their men off to war and raised their babies alone. Their fortitude didn’t keep them in the house. With no men at home, the women worked in factories. My grandmother (shown sitting on her stoop in 1944) ran a drill press in a machine shop. 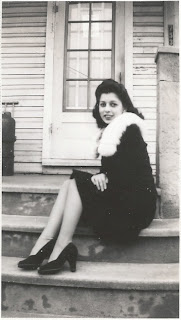 Sadly my aunt passed away a few years ago, but my grandparents are in the 80s now.  They remain frugal and hard-working. They still live in their own house, which is cleaner than mine (much cleaner). They throw very little away. My grandfather grows his own vegetables, and he’ll slice the mold off two week old ham and eat it no matter how much we beg him to throw it away. Leftovers are recycled into another meal. Bread heels go into the freezer for future stuffing. It’s a way of life for a generation who made a life for themselves through sheer hard work, ingenuity, and backbone.

When I was a little kid, I was always amazed at the things my grandparents could do. It wasn’t until I grew up that I realized it wasn’t a love for crafts or special talent. They learned to sew and paint and cook and fix things out of necessity.

Real strength comes from diligence, tenacity, and the willingness to do what needs to be done, not big muscles or a gun (though my grandmother was reportedly an excellent shot in her day.)  These qualities show up in my heroines, too. They’re usually regular people rather than cops or federal agents. Often, they’re the quiet type that everyone underestimates, especially the villains.

Rachel Parker, the heroine of She Can Tell, just wants to get on with her life after an accident ends her riding career. But before she can do that, she has to contend with her sister’s abusive husband, a violent stalker, a cold murder case, and a hot cop she doesn’t want anything to do with.

Melinda will be giving away a Kindle copy or ARC of SHE CAN TELL (winner's choice).

Giveaway ends 11:59pm EST Dec. 8th. Please supply your email in the post. You may use spaces or full text for security. (ex. jsmith at gmail dot com) If you do not wish to supply your email, or have trouble posting, please email maureen@justromanticsuspense.com with a subject title of JRS GIVEAWAY to be entered in the current giveaway.
Posted by Maureen A. Miller at 12:30:00 AM