Congratulations to "Kai", the winner of Ellis's giveaway. Thank you to all who participated!

What’s the hardest single element to write in romance? For me, it’s internal conflict. Flying to the moon is easier than making it original. But it’s necessary to sell to an agent or editor. So often I read stories, otherwise good with a fresh treatment, but the internal conflict seems forced or contrived. However, lack of internal conflict equals rejection by agents and publishers. So we struggle to come up with some inner torment to keep the hero and heroine apart through most of the story.

The hero had his heart broken by some uncaring witch and now doesn’t trust any woman. Same for the heroine. Sometimes their hearts were broken by death. Or maybe damaged by childhood trauma. Still, the result is the same. The question is, can they open up and allow themselves to love/trust again?

Well, yes, of course they can, or we wouldn’t have a romantic story to read. So in a way, it’s predictable. It’s the characters, the situation, and the writing that make it unique. That’s what draws me in and makes me believe in the story. But for me, it’s all enhanced by external conflict, by danger and suspense. Impending doom takes the focus off the internal conflict. Who cares if he left you ten years ago if he’s here to save you from death now? Threats of disaster tend to bring people together, and they must trust each other to survive. In those dark moments their true character and feelings are revealed.  That’s why I read and write romantic suspense. I like the excitement and sense of danger. 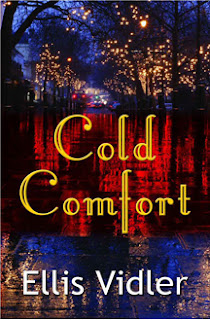 I’m giving away a copy of Time of Death or Cold Comfort—your choice.

Because it’s almost Christmas, I’m including this excerpt from Cold Comfort. Following a vicious attack, Claire tries to hire Riley to investigate. He’d prefer to ignore her but owes the friend who recommended him, so he agrees to at least see her. In this scene, she’s leaving Mistletoe, her fairy-tale Christmas shop, for the day, but Riley notices a stranger watching.

* * *
Standing in a circle of light from a bare bulb over Mistletoe's rear door, Claire Spencer twisted the key in the lock, then dropped it into her bag. She turned in Riley's direction, moving fast. Headlights appeared at the far end of the alley. Claire stepped from behind a Dumpster. With a roar of the engine, the car leapt forward.
"Look out! Behind you!" Riley sprinted toward her.
She glanced over her shoulder into the headlights of the speeding car. To Riley's eyes, her silhouetted figure appeared to rotate in slow motion against a backdrop of blinding light. He ran harder.
Three more yards.
He grabbed her in a flying tackle an instant before the car reached them. His momentum carried them out of the car's path and between a pair of overflowing trash bins. Twisting as they went down, he took the brunt of the fall and landed rolling, cradling her head against his chest. The car skidded around the corner, tires squealing. He didn't see the license plate but figured the guy stole it anyway. Bastard.
Carefully removing his arm from beneath her head, he rolled off the woman he'd just flattened. Levering himself to his feet, he said, "Okay, lady, I'll take your case."

Giveaway ends 11:59pm EST Dec. 12th. Please supply your email in the post. You may use spaces or full text for security. (ex. jsmith at gmail dot com) If you do not wish to supply your email, or have trouble posting, please email maureen@justromanticsuspense.com with a subject title of JRS GIVEAWAY to be entered in the current giveaway.
Posted by Maureen A. Miller at 12:30:00 AM