Behind a story: The art of turning fact into fiction. 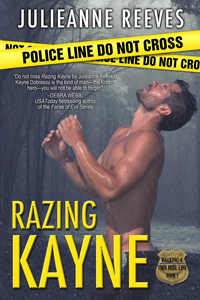 Hello, my name is Julieanne Reeves. I'm the Amazon's Bestselling author of Razing Kayne (Book 1 in my Walking a Thin Blue Line police series). For those of you who don't know, I'm a former police/fire/911 dispatcher. Working for a small agency afforded me the opportunity to take an intimate look into all aspects of law enforcement. Little did I know that years later I'd be putting that knowledge to use writing Romantic Suspense. But here I am, and I'm hoping to be able to give you a look into the process—well at least my process—of writing romantic suspense.

One night, many years ago, my agency received a call of a domestic dispute in progress. Upon arrival, the officers learned that the male suspect was known to them and had an outstanding felony arrest warrant for drug charges. He was purportedly flying high on drugs at the time. When the officers made their move to apprehend him he dove through a plate-glass window to avoid being arrested. A manhunt ensued; there was evidence he'd been seriously injured with the stunt. It took nearly 24 hours, and the help of several police agencies, but the suspect was taken into custody. He'd been nearly 100 miles away, holed up in a hotel room, and slowly bleeding to death.

So, how am I going to turn that case into fiction? Well I could do it a couple different ways, but lets' try this:

Undercover DEA agent Timothy Davis stood with his back to the large plate-glass window. The officers—both of them rookies—had no idea who he was. How could they when he barely remembered the answer to that himself? Tim had been living in the underbelly of humanity for so long he wondered if he'd ever see the light again. Standing here staring down the barrel of this officer's duty-weapon he feared that answer was no.
“Keep your hands where I can see them and get down on the ground!” the officer shouted, but Tim couldn't obey that order. Too many people's lives hung in the balance, including those of the men trying to take him into custody.
Maybe he could convince these guys they had the wrong man. “Look, there's been some misunderstanding—”
The officer's finger tightened slightly on the trigger. “I said get down on the ground!” Damn, the kid was scared; a bad quality that didn't bode well for Tim.
Apparently he was going to have to do this the painful way. Tim slowly spread his arms wide, keeping his palms open, giving every indication he planned to comply. He'd bide his time and make his move. One way or the other he had to get the hell out of here and catch up with the bastard he'd been chasing for the past five years.
His chance came far sooner than he'd expected when a door to his left opened and both rookies made the fatal mistake of taking their eyes off him for a split second. Tim took advantage and launched himself through the plate-glass window and toward freedom...

In this case I decided to make our bad-guy an undercover DEA Agent. That wasn't the situation with the real life incident, but it's a good example of how facts can be spun into a story.             While I don't foresee that incident every making it into one of my books, it is the writing process I used with Razing Kayne.

Razing Kayne's opening Prologue—well , a variation of it—was the first scene I wrote. A murder-suicide case had been splashed across the media. The mother had purportedly killed her children and then herself. A scenario that is regrettably not an isolated incident. The incident was tragic enough, but then a cameraman captured a momentary glimpse of the father as he was being escorted out of the house and into a patrol car. You see, he'd found his family dead, and called 911. But in that moment the cameraman caught sight of that father and husband and every ounce of pain that possessed him was right there written across his face. He believed his wife had done the unspeakable and he was understandably shattered. Witnessing his anguish was enough to cut someone off at the knees.

Though I don't remember his name, and did not learn the outcome of the investigation, his image remains indelibly imprinted on my mind. Eventually I gave in to the emotion swirling around inside me and wrote that epilogue. My first attempt at was from the Oksana's—the mother's—point of view. To say I was shocked over what “really” happened in the fictitious version is an understatement. By the time I was done I had a story outline. I knew who was involved, what had happened, and most importantly, why they'd done it: Colonol Mustard in the Library with the Candlestick. ( (c) Hasbro's Clue)  From there I used my experience as a dispatcher and my knowledge of police procedure and before I knew it a Razing Kayne was complete.

You can read that prologue and the first few chapters by downloading the sample from Amazon.com or your favorite e-readers store. 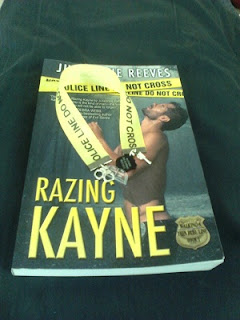 The Giveaway: Leave a comment below telling me what your favorite read of 2012 has been.

And since it's almost Christmas, I have a special gift the rest of you: The first 25 people to comment will receive an e-copy of Razing Kayne. (Worldwide. You can gift it to someone else or keep it for yourself) All I ask is that you spread the word about this blog post through one of your social media channels (Facebook/twitter/pinterest etc) **The Ten runners up apply to anyone commenting after the first 25.

Giveaway ends 11:59pm EST Dec. 14th. Please supply your email in the post. You may use spaces or full text for security. (ex. jsmith at gmail dot com) If you do not wish to supply your email, or have trouble posting, please email maureen@justromanticsuspense.com with a subject title of JRS GIVEAWAY to be entered in the current giveaway. (US/APO mailing address only for grand prize.)