A Man To Trust

Congratulations to "Debra S.", the winner of Cheryl's giveaway. Thank you to all who participated!

Hi. My name is Cheryl Yeko and I write romantic suspense. I enjoy novels with fast-paced action and steamy romance, protective alpha men and strong heroines. 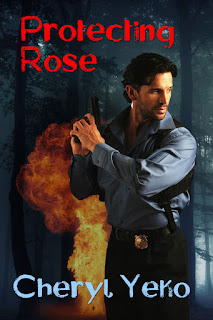 My debut novel was released in December 2011, PROTECTING ROSE, which won the 2012 Gayle Wilson Award of Excellence in romantic suspense. It was a very thrilling time for me. Having never written anything before, I wasn't sure I would be able to write a novel, and was (and still am) on cloud nine to find out that I was able to complete a story that people enjoyed reading. My second novel, A MAN TO TRUST, was just released and I’m hoping folks enjoy this story as well.
My current WIP is tentatively titled, TAKEN. But there are a lot of novels out there with that name and I need to think of something else. This story actually started out as a novella. I was taking a class through Savvy Authors on how to write a sensual novella. I wrote a 20,000 word story and sent it off to my publisher. She liked it, and thought it would be a great story to expand into a full-length novel. So, I did. I'm sitting at about 59,000 words now, and heading into the final action scene. I have to say, it was a very challenging task to take a completed story and expand it. But I did it!! The next and final step is to create a heart-pounding action scene and happily-ever-after ending. I'm very excited about this and want it to rock!The story is about a woman who is kidnapped by a homegrown terrorist group in the United States wanting to blackmail her father. And of course, there is an undercover cop on the inside who needs to keep her safe, while bringing down the bad guys. So, if anyone has any ideas on a name…I'm open to suggestions! LOL

I also have a paranormal series in the works and have three chapters completed. Which is a lot like romantic suspense…but I get to make stuff up and no one can bust me on it! How fun is that? Of course, I'm really hoping this series takes off and I can become the next J.R. Ward. Wish me luck!…

My fourth novel, currently in the works, is the last in the, PROTECTING ROSE, series. It is Rick and Sheila's story, (no title yet) who are both characters from Protecting Rose. Rick is also in, A Man To Trust. My plan is to complete the arc and bring all the characters together one last time. This time, Rick gets the girl! 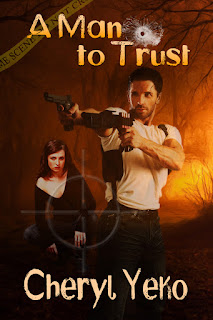 A MAN TO TRUST, is loosely based on a double murder trial that I was a juror on last year. It was a very high profile trial where I live and lasted two weeks. I built a romance between the widow of one of the murdered drug dealers and the lead detective on the case.

I hope everyone enjoys, A Man To Trust. Here is the blurb:

The battered survivor of an abusive marriage, Angela doesn’t mourn her husband’s death in a drug deal gone bad. But she’s not sure she can survive losing her heart to the handsome detective who believes she’s a criminal, too.
Tasked with Angela’s safety after she’s targeted by an unknown enemy, Jake discovers the beautiful widow is not what she seems. He soon realizes that trusting her goes hand-in-hand with desiring her, and passion and duty collide.
Now it’s up to Jake to keep Angela—and their chance at happiness—alive.

Cheryl will be giving away an eBook of A MAN TO TRUST to one lucky commenter.

Giveaway ends 11:59pm EST Dec. 5th. Please supply your email in the post. You may use spaces or full text for security. (ex. jsmith at gmail dot com) If you do not wish to supply your email, or have trouble posting, please email maureen@justromanticsuspense.com with a subject title of JRS GIVEAWAY to be entered in the current giveaway.
Posted by Maureen A. Miller at 1:00:00 AM