Congratulations to "Taurus", the winner of Toni's giveaway. Thank you to all who participated.


I’m not someone who has wildly exciting dreams. They usually involve being chased by Tyrannosaurus rex, or gorillas, or trying to go through ever increasingly smaller doorways. I’m sure there’s a very interesting psychology behind these dreams but they’ve never sparked an idea for a story (although I suspect Michael Creighton shared the T-rex one as a young man :)).

About eighteen months ago I awoke from a nightmare with the sweat pouring off my skin and my heart literally pounding. I’d had an incredibly vivid dream where I was pushing a stroller along this country lane. My daughter (as a toddler) was balancing on fallen logs and running through dead leaves at the side of the lane. Then she disappeared from sight but it’s like she disappeared off the face of the earth because the whole world went silent—even the birds in the trees and the rustle of leaves.  The baby is in the stroller and he starts to fuss. And then this man walks out of the trees and holds up my daughter’s coat. The man is wearing a black mask and I can’t see his face. I’m paralyzed. I don’t have time to get the baby out and run and even if I did, I can’t leave my daughter. I wake up just as the man is coming toward me and I’m just standing there like the proverbial deer in headlights.

Ugh, I can’t even tell you how awful that dream was. 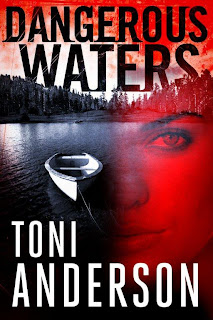 But then I connected the dream to a story idea I’d been playing with, a Romantic Suspense set in a remote community on Vancouver Island, and suddenly I had everything I needed to start the new story. An old mystery intertwining with a new one, and a hot romance :). That story is DANGEROUS WATERS and releases today!

Known as the Graveyard of the Pacific, Barkley Sound is notorious for surging swells with the power to pull helpless victims into its merciless abyss…

Sergeant Holly Rudd arrives in the coastal community of Bamfield after local divers discover a body with a knife jutting from its chest in the waters of Barkley Sound. As she investigates the crime, Holly soon realizes the sleepy town is rife with secrets. But what unsettles her most is the residents’ insistence that she bears a striking resemblance to the victim of a murder from three decades earlier. She shrugs off the uncanny likeness as a coincidence. But her simmering attraction to Finn Carver, one of the divers who discovered the corpse, isn’t so easy to ignore.

Finn, a former Special Forces soldier, knows it’s best to keep his distance from Holly. Yet it isn’t long before they both give in to the consuming desire they share. And as the danger escalates, Finn and Holly must rely on each other to thwart the plans of a cold-blooded killer who’s intent on keeping the past buried.

So—what do you dream about?

One person leaving will win a digital copy of SEA OF SUSPICION.

Order from Amazon USA or UK. Also, Canada, France, and Germany.
Also in print from Barnes & Noble (US) and McNally Robinson (Canada).
Audio from Brilliance Audio.
Check out Toni's website and Amazon Author Page for a list of current titles and her blog for more details. I've also started some picture boards for my novels and travels on Pinterest.

Giveaway ends 11:59pm EST Nov. 20th. Please supply your email in the post. You may use spaces or full text for security. (ex. jsmith at gmail dot com) If you do not wish to supply your email, or have trouble posting, please email maureen@justromanticsuspense.com with a subject title of JRS GIVEAWAY to be entered in the current giveaway.
Posted by Maureen A. Miller at 12:30:00 AM