Congratulations to "Niina C." the winner of Melissa's giveaway. Thank you to all who participated. 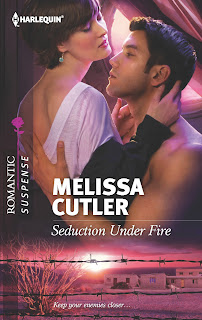 Melissa Cutler here, and I'm so excited to be at Just Romantic Suspense today talking about my Harlequin Romantic Suspense debut, SEDUCTION UNDER FIRE, which is in stores now. I love enemies-to-lovers stories, and let me tell you, Aaron Montgomery and Camille Fisher hate each other's guts when this book starts. So how do you get two people who fight like cats in a bag to realize they're actually in love? Simple! Put them on the run in Mexico where they're forced to work together to stay alive while rescuing a lost little girl.

Camille is a tough-as-nails cop and one of my favorite characters I've written. She's like a female MacGyver, improvising weaponry and hatching plan after brilliant plan to keep her and Aaron from biting the dust. The one thing that trips her up? The way she feels every time Aaron looks at her with those striking blue eyes like she's his own personal all-you-can-eat buffet.

Throughout the story, Camille learns a lot about herself and about falling in love, but you know what? There's a lot that we ladies can learn from her too. I'm sharing ten of them with you here…

What You'll Learn from Kickass Cop Camille in SEDUCTION UNDER FIRE:

When it comes to guns, size matters.

A perfectly reasonable way to celebrate escaping your kidnappers is to chop all your pesky hair off.

Yes, you can improvise a screwdriver using your bra.

There's a huge difference between fondling and cuddling.

Building a bomb might take longer than you think, especially if the only workspace available was the site of your last (*ahem*) indiscretion.

Sometimes, you have to get lost in Mexico in order to find yourself.

Zip tie bindings are no match for the right shoelaces.

Not every owner of a flashy sports car is compensating for his…er… shortcomings.

It's definitely possible, though ill-advised, to skydive in a business suit.

If you're stuck in Mexico on your birthday, the best present you can give yourself is unwrapping the hot guy you're trapped with—but be careful because you might just lose your heart to him in the process.

Don't believe me about the bra screwdriver? Trust me, it works! Here's the scene straight from SEDUCTION UNDER FIRE:

Aaron’s heart pounded so loudly, he was surprised Camille couldn’t hear it. Without weapons to defend themselves, they were as good as dead.
“Camille, I’m running out of ideas.” He glanced in her direction. What he saw was so at odds with what he expected that words died in his throat. Trying to ignore the taut points of her nipples beneath her thin white camisole, he watched her bite a hole in the beige bra she held.
“You got a weapon stashed in there or something?”
She ignored him and pulled a long, thin wire from inside the bra cup, then snapped it in half. “Bet you didn’t know underwire is flat like a screwdriver.”
“No, can’t say I’ve thought much about bras except how to get them off as quickly as possible.”
Rolling her eyes, she turned away and put her bra on. Once she’d righted her clothes, she knelt before the door that led outside. Using the blunt end of the underwire, she loosened the doorknob’s screws.
"Throwing a doorknob at them is better than nothing, but hardly game changing, MacGyver.”
She glanced sideways at him. “You’re a dense man. We’ve been over this already. I hate nicknames. Take off one of your socks so we can put the doorknob in it. We can do serious damage to someone’s head that way.”
Aaron grinned, genuinely impressed. Even so, he couldn’t stem the urge to tease her. “I didn’t think a chick would be so handy to have around.”
She jumped to her feet and rushed him. With fiery eyes, she poked him hard in the chest and waved the underwire beneath his nose. “You ought to show more respect to the person who’s saving your life.” She poked him again. “I’m not one of those helpless cupcakes you waste your time with. I graduated head of my class at the police academy and was the first female Special Forces Officer in San Diego. Those sons of bitches have no idea what a mistake they made messing with me.”
Aaron held up his hands in surrender. The gesture lost significance by the fact that he was chuckling. For some sick and twisted reason he didn’t care to analyze, he liked her when she was all riled up this way.

Giveaway: I'm giving away a copy (print or digital) of SEDUCTION UNDER FIRE to one commenter, so tell me…what's the most "MacGyver-ish" thing you've ever done?

My thanks to Just Romantic Suspense for hosting me today. I love hearing from readers and am really easy to find at www.melissacutler.net, on Facebook (www.facebook.com/MelissaCutlerBooks ), and Twitter (@m_cutler). And you can always email me at cutlermail@yahoo.com or sign up for my newsletter (http://www.melissacutler.net/?page_id=255 ) to find out about my latest books and upcoming events.

Giveaway ends 11:59pm EST Nov. 3rd. Please supply your email in the post. You may use spaces or full text for security. (ex. jsmith at gmail dot com) If you do not wish to supply your email, or have trouble posting, please email maureen@justromanticsuspense.com with a subject title of JRS GIVEAWAY to be entered in the current giveaway.
Posted by Maureen A. Miller at 12:30:00 AM