Congratulations to "Colleen C." the winner of Patricia's giveaway.  Thank you to all who participated! 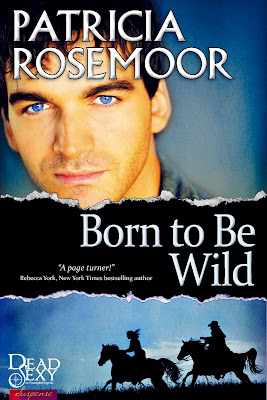 “Yee-haw!” Micah yelled, swatting his horse’s rump with the brim of his hat. “Go, Slade, go!”
Slade’s muscles bunched and Micah lay along the horse’s neck as they raced up Suicide Hill, a half length ahead of his nearest competitor. He was doing a damn fool thing and the old man would threaten to whip the skin off his hide if he knew what they were about, but being eighteen, he was up for any challenge. He would get away with it, too, just as he always did.
Out of the corner of his eye, he saw another horse’s nose edging closer from behind. Micah dug his heels in Slade’s sides a little sharper. The horse’s neck was already wet with sweat, his breath heaving, steam coming from his nose. Slade responded with a powerful lunge that almost unseated Micah. Laughing, he grabbed onto the thick mane, tightened his thighs around the horse’s barrel and did his damnedest to hang on until they crested the top of the hill in front of his buddies.
“Woo-hoo!” he yelled, straightening in the saddle and bringing Slade to a dead stop.
The Soto brothers, Bobby and Hank, caught up to him.
“I won,” Micah informed them. “You each owe me a case of beer!”
“As if we’re old enough to actually buy beer,” Hank groused.
Bobby laughed. “Fake ID, bro.”
Hearing hoofbeats behind him, Micah turned in the saddle to see an incredible sight approach—a mahogany bay that had to be seventeen hands or better. The young woman who had complete control of the horse, despite the fact that she was riding bareback, brought him up short.
“What the hell do you boys think you’re doing?” she demanded.
Hank looked uncomfortable, but Bobby laughed again and asked, “Who wound you up, little girl?”
But damn. Isabel Falcon wasn’t little, Micah thought. Not anymore. She’d grown since he’d last seen her. Even with her sitting a horse, he could tell her hips had widened. Her breasts had definitely filled out. And with the sun behind her, her hair glowed an incredible halo-red, though it was in fact a dark mahogany, nearly the same shade as her mount’s coat.
“Are you trying to kill your horses or yourselves?” she asked. “There’s a reason this is called Suicide Hill.”

My horse books are all personally researched. And/or use personal experiences for a little color. For example, in BORN TO BE WILD, my first Dead Sexy, the romantic suspense imprint for Entangled Books, Suicide Hill plays an important role in the story. I used to ride at an adult horse resort in Michigan, and that’s where I rode Suicide Hill, an experience I’ll never forget. I’d had a riding accident earlier that summer. Not the first time I’d been thrown, but definitely the worst. I was taken off the field on a board with my neck tied down. Thankfully it wasn’t broken, but I spent more than a month wearing a neck brace, and then had a difficult time getting comfortable on a horse again.

Until Suicide Hill, that is.

The wrangler wasn’t supposed to take us up there because it was so dangerous. It was nearly straight up. And, near a lake, it was sandy ground. I had to lie flat against the horse’s neck to get to the top. And I had to lean all the way back, my shoulders against the horse’s rump, to get down. My powerful mount lunged on the way up and basically slid on the way down. Besting Suicide Hill cured me of my fear. If I could manage that and feel exhilarated afterward, there was no reason to be afraid any more.

So what fears have you overcome? Do you have a fun/scary story you’d like to share? The best story will get a free digital backlist title – TOUCH ME IN THE DARK, another horse story – via Smashwords.com.

With 93 novels and more than seven million books in print, Patricia Rosemoor is fascinated with "dangerous love" – combining romance with danger. In her other life, she teaches Popular Fiction and Suspense-Thriller Writing, credit courses at Columbia College Chicago.
Visit her website: http://PatriciaRosemoor.com
Facebook: https://www.facebook.com/PatriciaRosemoor

Giveaway ends 11:59pm EST Nov. 4th. Please supply your email in the post. You may use spaces or full text for security. (ex. jsmith at gmail dot com) If you do not wish to supply your email, or have trouble posting, please email maureen@justromanticsuspense.com with a subject title of JRS GIVEAWAY to be entered in the current giveaway.
Posted by Maureen A. Miller at 12:30:00 AM