Congratulations to "Amy R.", the winner of Mal's giveaway. Thank you to all who participate.

Romantic suspense: Technically, according to top authorities, for a novel to be truly a Romantic Suspense, the blend of the two genres must be equal. Not to say an author can't write a suspense with elements of romance or that a romance can't have a touch of suspense.

Since Romantic Suspense is where it's at for me, there's good news and there's bad news. Besides juggling the already numerous balls a writer must juggle—plot, setting, narrative, dialogue, goal-motivation-conflict, action-reaction, scene-sequel, voice, character arc, story arc, the list goes on—the  romantic suspense author must add to the act the weaving of two story threads: romance plot and suspense plot. Nora Roberts in her article "Crafting Romantic Suspense" published on www.thewritingcorner.com says this weaving must be done perfectly, the two plot lines must be dependent on each other, and the construction must be meticulous. Whew! That's a pretty tall order. Not too much romance, not too much suspense, but as in Goldilocks, the brew must be just right.

On the plus side, the instant tension created when an author drops the hero and heroine into a pot of boiling water, allows for a great hook. What better way to pump up a reader's adrenaline than by giving them the promise of romance blossoming on the edge of danger. The other good news is, writers who are passionate about romantic suspense are ravenous readers of the genre. A lot of the "dos and don'ts" become ingrained subconsciously. Instinct helps the writer get it right. In my case, I'm not obsessing over measuring exactly the balance between romance and suspense. It all works out, almost naturally, since I've been steeped for years in the works of Linda Howard, Suzanne Brockmann, Tara Janzen, Cindy Gerard, Elizabeth Lowell, Ann Stuart, Brenda Novak, and many other excellent RS authors like the ones in the archives of Just Romantic Suspense. :) 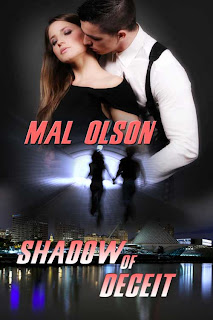 When an author writes what she loves to read, she's well on the road to writing what others may love to read. It's simple, right? As long as the writer keeps juggling those balls—keeps things moving at a lightning fast pace, and by the end of the story the villain has suffered retribution, the hero and heroine have made some kind of commitment, and along the way, the reader has been treated to edge of the heart romance and edge of the seat suspense—voila, the author has succeeded in producing a true Romantic Suspense novel—in three words: Shadow of Deceit, my debut novel. (Mal Olson, author of adrenaline kicked romantic suspense)

The following excerpt from Shadow of Deceit focuses on the romance and the growing sexual tension.

Minutes later, he reappeared, weaponless—so to speak—the streetlight’s glow illuminating his face, gold beams glistening in his hungry eyes. “It’s all clear.”
His powerful hand clasped hers, and he led her inside. When she tried to reach for the light, his fingers tightened. In the darkness, he trailed his thumb across her cheek.
The practical side of her brain hammered a warning.
“Tony, maybe we almost made a mistake.” She’d be crazy to take such a big step, to become intimate with him, simply because her estrogen was running rampant. She had to think this through. Tony was an FBI Agent. He was investigating her dead husband. Maybe he was investigating her.
“Maybe this is a little too fast.”
“I can do slow.” His index finger stroked her upper lip, languorously, delicately, as soft as a butterfly’s wing.
She swallowed.
Earlier, when they’d almost made love, they hadn’t been here, at the house she had shared with Tyler and Casey.
“I don’t think I can do this. Here. Maybe you should go back to the hotel.”
His hand stilled. “I understand. But do you think I’m leaving you here alone?”
On a sensual level, she’d be safer alone.
Alone. She had managed just fine alone since she’d been discharged from the hospital after Tyler and Casey…Tears stung her eyelids.
“Sometime you’re going to have to let go, Shannon…of the past and grab on to the here and now…I just want to make you feel good for a little while.” He twirled a strand of her hair around his middle finger and exhaled, his warm breath so close to her ear it turned her shivers to waves of need.
Her heart pounded. She licked her lips, but she forced herself to push away from him.  She wasn’t thinking straight.
“Tony, I’m sorry. Not tonight. I can’t…” Probably never. She looked down and concentrated on her boots. If she risked looking at him, she might crumble.
He cupped her chin and tipped her face toward his. Kissed her right eyelid. Her left eyelid.
Maybe never.
Trailing the tip of his tongue over her lower lip, he somehow ended up with his arms around her.
Practically thinking, she knew if she locked him out of her house, he would spend the night in the cold keeping watch from the rental car. And dear God, if she allowed him inside…it was still going to be a long cold night. For both of them.
She wiggled out of his arms and slipped away, hurrying down the hallway without looking back. She dare not let him see how much she wanted him.
“You’ve got the couch, Crazaniak.” 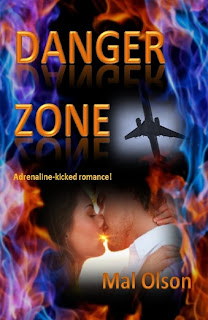 Which element of romantic suspense draws you in the most? Hot, sexy law enforcement heroes? A thrilling plot? Touching romance? Scare-you-to-death villain? Stop by and say hello. I love to meet readers.

Join in on the comments, and one of you will receive a free e-copy of Shadow of Deceit. And, everyone can take a fifteen minute ride into the Danger Zone at Amazon, B &N,  Smashwords, or on my website. It's free!

Air Force pilot Katrice Kennedy is a woman with nerves of steel capable of flying an F22 at supersonic speeds. Ex-Delta Force operative Benjamin Thigpen is a Homeland Security specialist immersed in national safety issues twenty-four-seven. They're strangers when they board a 747 in Washington D.C. But are they destined to become kindred souls when they survive a rock 'n roll landing on an icy Milwaukee runway and chase a could-be terrorist into the Danger Zone?

Look for my next romantic suspense, on track to release early in 2013.

Too Sexy For His Stetson – contemporary set in the west:
Fighting a forbidden attraction to her sexy training officer, a street-smart rookie sheriff investigates a homicide related to her mother's wrongful murder conviction, only to discover her prime suspect is said training officer's best friend and father figure. (I'll do a cover revel the next time I blog here on JRS.)

Giveaway ends 11:59pm EST Nov. 17th. Please supply your email in the post. You may use spaces or full text for security. (ex. jsmith at gmail dot com) If you do not wish to supply your email, or have trouble posting, please email maureen@justromanticsuspense.com with a subject title of JRS GIVEAWAY to be entered in the current giveaway.