These aren’t the feelings I’ve experienced in my lifetime. They’re what I’ve felt in the last fifteen minutes.

Writing, the act of creation, is a blast, a high, a shot of adrenaline.

There are times when I think it’s the most wonderful thing in the world.

And there are times when I swear I’m never, ever going to do it again.

But of course I go back to it. It’s my addiction, or perhaps some sort of congenital defect. Something in my genes makes me have to do it. I’ve been afflicted since I was a little kid.

I think nothing of turning down an invitation to a party if it means I can curl up with my spiral notebook and purple pen.

And yet I’m a master procrastinator. I’ll gladly scrub the bathroom to avoid sitting down to write.

There have been times when I’ve enjoyed the magic of my compositions, but most of the time I think I’m a hack. I believe that each success is a fluke and that it will never happen again.

I look back on things I’ve written and am proud of what I’ve accomplished.

I read old works and cringe that the dreck made it out into the world for public consumption.

Writing has lifted me to my highest highs and has stomped me down to the lowest of lows.

I vow to never do it again; but within a short period of time, I get an idea that won’t leave me alone until I’ve written it down, explored it, fleshed it out until it becomes as real to me as the world around me. 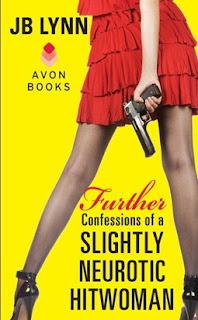 Take three wacky aunts,
two talking animals,
one nervous bride,
and an upcoming hit,
and you've got the follow-up
to JB Lynn's wickedly funny
Confessions of a Slightly Neurotic Hitwoman

Knocking off a drug kingpin was the last thing on Maggie Lee's to-do list, but when a tragic accident leaves her beloved niece orphaned and in the hospital, Maggie will go to desperate lengths to land the money needed for her care.

But the drug kingpin is the least of her worries. Maggie's aunts are driving her crazy, her best friend's turned into a bridezilla…and a knock on the head has given Maggie Dr. Dolittle abilities—she can talk to animals. Unfortunately, they talk back.

It's just another day in the life of this neurotic hitwoman…

Besides being a writer, JB Lynn is a compulsive reader, a runner (of sorts), an enthusiastic cook (who doesn't get the appeal of the Food Network), and someone who has an irresistible urge to eavesdrop at all times. JB has a great love of her husband, dogs, coffee, purple ink, spiral notebooks, running gear, hot showers, and '80s music. Given enough time, all of these things will eventually show up in her books.