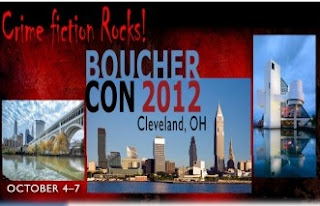 I’ll be attending one of my favorite conferences is coming up on Oct 4-7 in Cleveland, Ohio. Bouchercon is a world mystery convention that has been taking place annually since 1970. It’s open to anyone and is a place for fans, authors and publishing industry professionals to gather and celebrate their love of the mystery genre. It is named for a famed mystery critic Anthony Boucher. During the convention there are panels, discussions and interviews with authors and people from the mystery community covering all parts of the genre. There are signing events for people to meet their favorite authors face-to-face and get books signed. Bouchercon also has the Anthony Awards which are also named after Anthony Boucher. These are voted on by the attendees and given out during the convention. For more, click HERE. Guests of honor for 2012 include: Elizabeth George, Robin Cook, Mary Higgins Clark, Les Roberts, Librarian Doris Ann Norris, and toastmaster John Connolly. HERE is the attendees list for 2012.

The Popularity of YA Books panel - How do authors appeal to young readers and keep them interested in reading? Book signing will be held in the dealer room following the panel. Joining Jordan will be Michelle Gagnon, Joelle Charboneau, Bev Irwin, and moderated by Keir Graff.

"I used to love her, but I had to kill her” Guns & Roses Panel - Moderated by author Monette Michaels, stellar panelists Heather Graham, Lori Armstrong, C. J. Lyons, and Jordan Dane will discuss romance in thrillers. Hallmark doesn't make a card for "I'd take a bullet for you, honey" but our panel of bestselling authors share their titillating secrets on how they spice up their thrillers with Guns & Roses. (Door prizes and giveaways for those in attendance. Grand Prize is the NOOK Color e-reader for one lucky winner.)

Prior to the panel, Mike Bursaw will host a “Booze & Broads” signing event at the Mystery Mike’s booth in the dealer Book Room for the authors. Alcoholic libations will be served, a shot at a time.

Anyone going to Bouchercon 2012? Have you ever been? I’d love to hear from you or see you there. 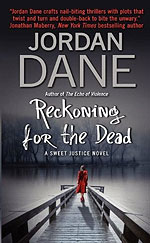 BIO: Avon/Harpercollins launched Jordan Dane's debut suspense novels in a back to back publishing event in Spring 2008 after buying the 3-book series in auction. Pursuing publication since 2003, Jordan had received awards in 33 national writing competitions and was an energy sales manager in the oil and gas industry prior to selling. Now she is following her passion and writes full time. Ripped from the headlines, Jordan's gritty plots weave a tapestry of vivid settings, intrigue, and dark humor. She loves challenging a reader's moral barometer with the borderline ethics of her characters and their flawed personalities—dark, angst-ridden antiheroes pitted against unforgettable villains. Publishers Weekly compared her intense pacing to Lisa Jackson, Lisa Gardner, and Tami Hoag—"romantic suspense that crosses over into plain thriller country with tight plotting and exceptional male characters, both bad guys and good."