By: Debra Webb
Congratulations to "Cathy P" the winner of Debra's giveaway! Thank you to all who participated.
When was the last time you started over? Maybe it was when you last moved to a different city. Or maybe your most recent career change was your latest fresh start. There’s always some amount of angst involved in starting over whether on a new job or settling in a different spot on the map. Moving to a new city requires that you find a home and learn your way around your new zip code. You may have left dear friends behind and getting to know the strangers that are your new neighbors can be a little wonky. In my experience, though, changing careers is by far the most disconcerting aspect of any “start over.” 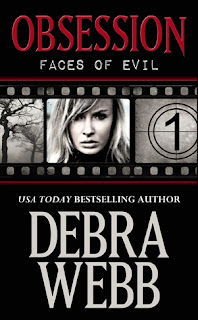 Former Special Agent Jess Harris is learning just how difficult a career change can be. If you read the first two books in the Faces of Evil series you know that things ended on a bit of an unpleasant note for her at Quantico. After seventeen years of dedicated service having one failed case seemingly destroy all she had worked to accomplish was not only unexpected but shattering. In the midst of this turmoil a man she hadn’t spoken to in more than a decade reached out to her. Not just any man, mind you—her first love. The man who broke her heart. Daniel Burnett. Chief of Police Daniel Burnett. And he called all the way from Jess’s hometown of Birmingham, Alabama. He needed her. Lives were at stake. And Jess had nothing better to do. So she hopped in her ten-year-old car and headed south.
The trip back to Birmingham restarted many things. The sparks between her and Dan that Jess had thought dead and gone long ago as well as an opportunity to re-launch her career as the deputy chief of a new unit in the Birmingham Police Department. Jess hadn’t lived in Birmingham in more than twenty years, so she was starting over from scratch. Her history there, however, goes deep and finding her footing won’t always be easy. 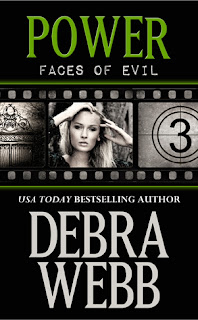 POWER, book three in the Faces of Evil series, was just released and Jess is wading into her first official case as Deputy Chief Harris. The colleagues and new friends she made in OBSESSION and IMPULSE join her in this third installment and things are heating up between her and Dan. Jess is living in a motel room since there hasn’t been time to find an apartment. She isn’t worried about where she lays her head at night. Her single focus is finding the killer who left a woman dead on the cold, unforgiving marble floor in her own home.
POWER leads us through Jess’s struggle to find her footing in BPD. She has to prove herself to those who feel she got the position because of her history with Dan. And somehow she and Dan have to find that sweet spot between the past and the present, between the personal and the professional. He can’t be her boss and her lover…can he? 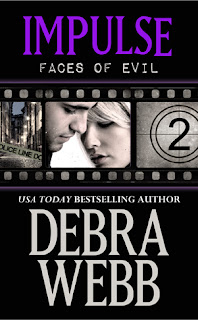 POWER leads us deep into the underbelly of crime in Birmingham while the developing relations between Jess and Dan and Jess and her team add a whole other layer of tension. I hope you’ll follow this cast of characters through all twelve books of the Faces of Evil series. Of the first two books, OBSESSION and IMPULSE, Cindy Gerard said, “Move over Jack Reacher, Jess Harris is comin’ to town!” And CJ Lyons said. “…readers won’t be able to resist.” RT Book Reviews magazine gave POWER, the third in the series, four and a half stars and said: Jess Harris doesn't have to go looking for trouble--it finds her. Jess is one of the toughest, smartest, most stubborn lady cops to strut the pages lately, but Webb's given her just enough vulnerability to keep her likable. This third entry in the Faces of Evil series is a hard-to-put-down police procedural with pitch-perfect voice, well-developed characters and a setting that is as much a part of the cast as the protagonists.
I’m giving digital copies of all three Faces of Evil books to one lucky commenter so don’t hold back! Tell me about your most unnerving “start over! And don’t forget to drop by www.thefacesofevil.com and become a person of interest! There’s going to be HUGE prizes in celebration of the release of POWER!
Giveaway ends 11:59pm EST Sep. 8th. Please supply your email in the post. You may use spaces or full text for security. (ex. jsmith at gmail dot com) If you do not wish to supply your email, or have trouble posting, please email maureen@justromanticsuspense.com with a subject title of JRS GIVEAWAY to be entered in the current giveaway.
Posted by Maureen A. Miller at 12:58:00 AM