Congratulations to "Susan T." the winner of Joan's giveaway. Thank you to all who participated!

My debut release, BLAZE, hit shelves and screens last Tuesday! YAY!  It is the second in the Phoenix Rising series.

The heroes and heroines in this series—firefighters in a special hazmat team—have been involved in a mysterious explosion at a military warehouse.  The contents of the building, radioactive chemicals used by the Department of Defense in secret scientific experiments, have inflicted the team with various paranormal abilities.  Abilities the government wants to study covertly.  Abilities the team wants to understand and expose.  With military advancement and national power at risk on one side and personal health and freedom at stake on the other, each group is fighting for precious stakes.

In BLAZE, two of the firefighters are reunited to confront the powerful enemy that originally tore them apart. Luke and Keira rally the rest of their former teammates as the enemy ups the stakes and exposes an even greater breadth and more twisted depth to the existing conspiracy; things the team never imagined possible.

A heavy premise, right?  It is romantic suspense with a paranormal twist after all.

But I believe there is always room for humor.  So I put together a few fun – an irreverent – firefighter sayings to lighten things up.  And yes, my husband, a veteran firefighter, did help with these.  As did his many firefighting buddies.  And, believe it or not – they’re censored.


Ø  Firemen are trained in mouth to mouth

Ø  Anyone that can carry his hose over their shoulder has something going for him.

Ø  Firemen have the longest hoses

Ø  Firemen know when to pull out

Ø  Firemen do it wearing rubber

Ø  The hotter it is, the faster firemen come

Ø  Firemen are always in heat

Ø  Happiness is sliding up and down a fireman’s pole

Ø  Behind every fireman is a woman holding his hose

Do you have a good one we left out?  What do you love about firefighter heroes?

Joan will be giving away a paperback of BLAZE to one winner in the US/Canada.

BIO:
Joan Swan is an award-winning author of sexy romantic suspense and occasionally throws in a paranormal twist or two for some extra spark.  In her day job, Joan works as a sonographer at UCSF Medical Center. She lives on the central coast of California in beautiful wine country with her husband and two daughters. 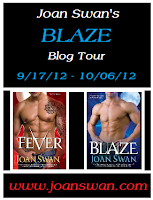 Dr. Alyssa Foster will admit to a bad boy fetish…
But when she finds herself face to face with a convicted murderer with a ripped body, a determination for freedom and an eye on her as his get out of jail free card, Alyssa knows she’s in deep trouble…. Not just because Teague Creek is a prisoner desperate for freedom, but because his every touch makes her desperate for more.
A man with a life sentence has nothing to lose…
Teague Creek has one shot at freedom, but his plan to escape with a hostage develops a fatal flaw: Alyssa. On the run from both the law and deadly undercover operatives who know of his strange abilities, he needs to avoid trouble, but every heated kiss tells him the fire between them could be just as devastating as the flames that changed him forever.
Purchase Links:
Kensington / Amazon / Amazon Canada / Barnes & Noble / B-A-M
Book Depository / Chapters / IndieBound / Powell’s

The hotter they come, the harder they fall…
With a man like him, every mission becomes personal…
Ever since FBI agent Keira O’Shay started tracking a young boy named Mateo, she’s felt a connection even her empathic abilities can’t explain. Sheneeds to save Mateo from the cult leader holding him hostage. Nothing can interfere with that—not even the reappearance of Luke Ransom, the hot-as-hell fire captain she’s regretted walking out on for three long years.
Losing Keira left Luke vulnerable—in every way. When they were together, the powers each possesses were mysteriously enhanced. But it’s the sexy, surprising woman beneath the tough exterior that Luke’s really missed. Even if she betrayed him utterly. And even if agreeing to help her uncover a government conspiracy means watching his life and his heart go up in flames again…
Purchase Links:
Amazon / Amazon Canada / Barnes & Noble / B-A-M / Book Depository
Chapters / IndieBound / Powell’s

Add to your Goodreads Shelf

Giveaway ends 11:59pm EST Sep. 30th. Please supply your email in the post. You may use spaces or full text for security. (ex. jsmith at gmail dot com) If you do not wish to supply your email, or have trouble posting, please email maureen@justromanticsuspense.com with a subject title of JRS GIVEAWAY to be entered in the current giveaway.