For His Eyes Only

By: T. C. Archer
Congratulations to email entrant, "Sandra G.", the winner of T.C.'s giveaway. Thank you to all who participated! 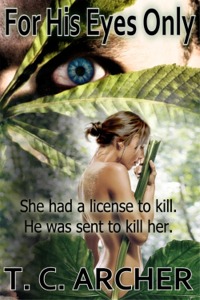 When we decided to write For His Eyes Only, we took cues from Ian Fleming, Alfred Hitchcock, and from that old, but great movie staring Cary Grant and Audrey Hepburn, Charade. No one is who they seem to be, and our heroine Jesse Evans can’t be sure she can trust the one man who can help her clear her name. The challenge of writing a thriller meant we had to sustain the action for eighty thousand words. So we threw Jesse right into the thick of things and put her on the run from the Columbian guerillas who shot her informant. Once she loses them, she races three kilometers through treacherous Columbian jungle in an effort to save the team who, only hours ago, got the ok from her to go in to rescue an American girl. It was a set-up from the word go.
Blurb—
Jesse Evans is the most wanted woman in the world. She must prove she didn’t sell out the elite Special Ops team she sent into a Columbian village to rescue a little girl, her sister dies. There’s only one man who can save them both. Only that man isn’t who Jesse thinks he is.
Excerpt--
Forty minutes later, the nearby staccato rat-a-tat-tat of machine gun fire sounded in rapid succession.
The village.
Jesse pumped her legs faster, thrashing and clawing through thick foliage. Another volley echoed.
“Come on, Green Team,” she urged. “Kick some drug runners’ ass.”
Muscles burned with the final effort to reach the summit overlooking the village. Branches whipped and tore at her face as she flew through the foliage and burst into the open above the village. She fell to her knees, fumbled the compact binoculars from a thigh pocket, and forced her shaky hands steady enough to scan the village as she dropped to her belly. Armed mercenaries danced in drunken celebration in the village center. Relief tightened her chest at sight of two men wearing U.S. fatigues, hands tied behind their backs and kneeling within the circle of mercenaries.
Green Team.
But Green Team was comprised of six men. Where were the other four? Her heart surged. They had to be hidden in the jungle, preparing to rescue their teammates. If she could find them—several mercenaries near the two men swung their rifles heavenward and fired bursts.
Stay calm, Jesse mentally urged the two Americans.
She scanned the village perimeter. No eyes, glint of metal, or shadow out of place. Dammit, until Green Team wanted to be seen she wouldn’t detect so much as a leaf flutter. She swung the binoculars back to the village center and counted forty-two armed men crowding the small square. Between herself and the four remaining Green Team members, they could—one of the men who had fired his rifle into the air swung the weapon downward. Jesse realized his intent and pushed to her knees as she yanked the 9mm Beretta from her thigh holster. The rifle barrel halted an inch from the nearest Green Team member’s temple. He lunged for the mercenary. The second Green Team member shoved to his feet.
Jesse fired in unison with the boom of the mercenary’s rifle. Blood gushed from the hole blown in the first Green Team member’s head.
Giveaway--
We’re going to give away one digital copy of For His Eyes Only to one commenter.
T. C. Archer is comprised of award winning authors Evan Trevane and Shawn M. Casey.
They live in the Northeast. Evan has a Ph.D. in electrical engineering, and Shawn is a
small business owner. Their collaboration began on a lark with the post WWII film noir
story The Pickle My Little Friend, and has evolved into nearly a dozen works, which
includes their new series The Phenom League, and the Daphne Du Maurier winner,
romantic thriller For His Eyes Only.

Giveaway ends 11:59pm EST Sep. 16th. Please supply your email in the post. You may use spaces or full text for security. (ex. jsmith at gmail dot com) If you do not wish to supply your email, or have trouble posting, please email maureen@justromanticsuspense.com with a subject title of JRS GIVEAWAY to be entered in the current giveaway.
Posted by Maureen A. Miller at 1:26:00 AM