By: Rebecca York
Congratulations to "Linda H." the winner of Rebecca's giveaway. Thank you to all who participated!
How many times have you wished for a “do over”?  You don’t like the way some episode in your life came out, and you wish you could change the outcome.  I’m guessing the most common fantasy in this regard involves a conversation you had—where you think of what you should have said hours or days later.
Of course, authors get to change the world all the time, at least with their characters.  You write a section of dialogue, then think of something better and alter what your hero and heroine are saying to each other.  Or you have someone try to kill the hero and heroine, then think of a better way to stage the scene. 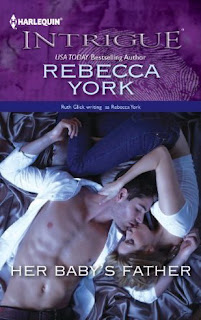 In my latest Harlequin Intrigue, I based a whole book on the fantasy of getting a second chance.
As HER BABY’S FATHER begins, Sara Carter is trying to drive herself to the hospital in a snowstorm.  She’s in labor, but the father of her child, Jack Morgan, is dead.  He’s from a rich family who have turned their backs on her when she needed them most.  After her car skids off the road and plows into a tree, she knows she and her baby are going to die.  But angels sent to escort her to heaven decide to send her back ten months in time.  To her astonishment, she meets Jack Morgan all over again.  She knows what he doesn’t—that someone is trying to kill him.  Can she save his life this time around?  Or is history doomed to repeat itself?
I had a great time with this concept.  Sara’s got her second chance, but reality keeps shifting, starting with her saving Jack’s life when a robber attacks them on the street.  That’s not the way it went down last time, and Sara doesn’t know what’s going to happen next.  Not only that, she’s afraid she’ll make Jack think she’s paranoid as she tries to convince him that someone he knows is out to murder him.  Yet maybe it’s going to be worse this time around.  Are both of them going to end up dead?  Or is she going to be accused of his murder?
I had just as much fun with the book’s setting as the basic premise.  It takes place in Ellicott City, a 250-year-old mill town about fifteen minutes from where I live in Maryland, the kind of place where you drive right out of the modern world and into the past.  I’m lucky it’s so close by.  And HER BABY’S FATHER gave me an excuse to stroll the narrow streets and drive up into the steep hills above Main Street.  It’s kind of like going to an ancient European town.  Main Street is deep in a river valley, lined with two-hundred-year-old stone buildings that have been converted to shops and restaurants.  There are antique dealers and quirky boutiques you won’t find anywhere else.
Of course, since I’m a romantic suspense writer, the setting makes me think of murder and mayhem.  I send Sara and Jack to dinner down by the old railroad station, then have them attacked on the street by a guy who’s using robbery as an excuse to kill Jack.
How do you like the idea of getting a do-over?  And is the setting of a book important to you?
I’m giving away a copy of my January Intrigue, SUDDEN INSIGHT.
Please visit me at my Web site, www. rebeccayork. com, or my blog,
www. onromancewriting. com.
I’m @rebeccayork43 on Twitter and http://www. facebook. com/pages/Rebecca-York/122426234846?ref=hl on Facebook.
Giveaway ends 11:59pm EST Sep. 14th. Please supply your email in the post. You may use spaces or full text for security. (ex. jsmith at gmail dot com) If you do not wish to supply your email, or have trouble posting, please email maureen@justromanticsuspense.com with a subject title of JRS GIVEAWAY to be entered in the current giveaway.
Posted by Maureen A. Miller at 1:21:00 AM