Children and Family in Romantic Suspense

R.T. Wolfe writes romantic suspense stories that manage to touch the hearts of her readers as well as their intellect. She lives in the Midwest and is a loving mother to her boys. She enjoys working in her gardens and spending time training her Golden Retriever and writing in and around each of these.

If done tastefully, children add a new level of suspense to a storyline. Their innocence and helplessness bring out the mother-bear in many of us. Adult family and friends add layers of trysts, suspicions and mold the main characters. 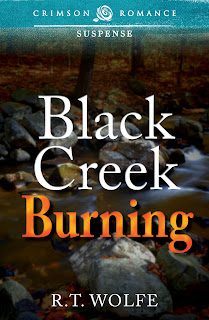 In Black Creek Burning, Nathan Reed inherited his young nephews after the death of his brother and sister-in-law. He was at the pinnacle of his woodworking artistry career. His work became nationally renowned and sought after by politicians, the rich and the famous. However, after four years of trying to juggle his lifestyle and fatherhood, he realizes he’s failing as a parent. Determined to keep his promise to his brother and to his nephews, Nathan sells his woodworking studio and moves back to upstate New York in order to be closer to the only other living relatives the boys have left, their grandparents. He finds a historic, rundown farmhouse and decides to move in with the intention of rebuilding the beauty in tandem with building his relationship with the boys.

Behind the farmhouse and over Black Creek is a classic Victorian and an odd brunette.
Brie Chapman witnessed the murder of her parents. It was an arson that had been meant for her. As a way of coping, she counts on the teaching job she adores by day and the landscaping business she owns by night. She also counts on her family and friends, although she keeps them an arm’s length away. What she hadn’t counted on was Nathan Reed and his adorable nephews. They have a clever way of maneuvering around her hard shell and into her heart. As much as she tries to stuff the unsolved murder in her subconscious, Nathan seems focused on solving it.

But today I’m not writing of the staggering Nathan Reed or the aloof Brie Chapman. I’m writing about the secondary characters and how they add a depth in Brie’s need to allow Nathan to open her heart and help her learn to trust the people who love her. The children bring warmth and the possibility of family, increasing the yearning for a happily ever after. The older of the two nephews becomes stuck in the middle between Brie and the killer who’s trying to finish a failed attempt on Brie’s life. The need for the main characters to protect and connect stirs more emotion and passionate need. So fun. I hope you enjoy it.

Black Creek Burning is the first in my romantic suspense Black Creek Trilogy. Set in upstate New York, it’s a story about taking chances with your heart… and about family, trust and passion.  Witnessing the murder of her parents was a brutal day for Brie Chapman. Learning her parents died in her place was almost unbearable. It took her years to overcome and move on as no suspects were found. Unknowingly, she ignites the dormant killer into coming back to finish the job. Nathan Reed moves in behind her with his two adorable nephews he’s raising as his own. Patiently, he transforms Brie from an icy self-proclaimed independent into a woman willing to accept not only the help of a strong man, but the love of a family.

As she meandered up the path to their house, she felt queasy, like she’d done this before. Nervously, she glanced over her shoulder through her mass of wavy brown hair as she kept moving toward the front door. Two people were walking along the street. She stopped and wondered what reason anyone would have to take a walk at this time of night in such an early bird neighborhood.

It was then she heard the shrill of the smoke detectors. Chest tightening, she bolted for the door.

“Mom! Dad!” she screamed and tumbled inside, spotting them almost immediately as they ran down the long upstairs hallway.

Not again. Please not again, she begged, as she fought her frozen legs to make them move up the stairs. The smoke detectors shrieked in her ears. Or was that the shrieking coming from her lungs?

Her parents yelled her name as they reached for the bedroom door. She couldn’t stop gasping for air long enough to tell them to stop. She wasn’t in there. Didn’t they know? They needed to get out of the house. Couldn’t they smell the smoke?

Just like each time, her viewpoint from the middle of the stairs showed her the yellowish air sucking under the door to her bedroom. Although trying to use the railing to give her momentum, every part of her felt like it was in molasses. She cocked her head to the side, drawing her eyebrows together. Her gaze locked on the eerie breeze.

Almost simultaneously, her mother rotated the knob as her eyes turned and met hers. For that fraction of a second, her mother understood the fear on Brie’s face, but it was too late. It was always too late. As she opened the door, Brie had just enough time to witness her parents engulfed in flames before the explosion blew her back and everything went dark.
* * * *
“Brie, wake up. Wake up, Brie. You’re dreaming.” 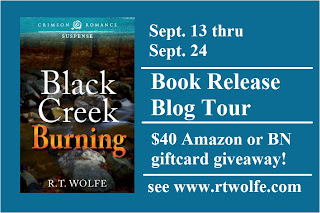 The above listed giveaway is hosted by the author. Visitors names are entered once for each blog they visit. A drawing for the $40 Barnes and Noble or Amazon giftcard prize will take place the day after the September 24th release of Black Creek Burning.