By: Adrienne Giordano
Congratulations to "BN" the winner of Adrienne's giveaway. Thank you to all who participated.
Recently someone asked me why I like romantic suspense. I smiled and said, “What’s not to like?”
Who’s with me?
For me, Romantic suspense is the delightful combination of my favorite genres. I love romances and I love thrillers, so when I decided to write a book, I naturally gravitated to romantic suspense. A couple working through the emotional ups and downs of falling in love is fun, but pair that with a bad guy chasing them (or them chasing the bad guy!) and it takes the reading experience to another level. 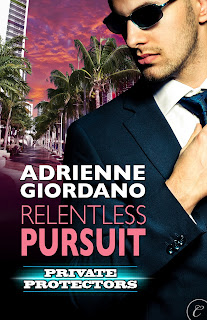 What I love even more is when two people who are drastically different make a great couple. When I started plotting my latest release, Relentless Pursuit, I knew Billy Tripp would be the hero. He’s been the comic relief guy in my earlier books, and I thought it was time to give this smart-mouthed, big-hearted operative a shot at the top spot. One of my critique partners (shout out to Kelsey!) told me Billy should be with an older woman.
Billy is, well, let’s say he’s active. He and his mouth are constantly on the move, which seems to get him in trouble. A lot. So, the idea of an older woman appealed to me because she’d be more mature and wouldn’t be afraid to set Billy straight when needed. I realized I didn’t necessarily need an older woman. I just needed a woman who had the maturity of an older woman. Enter Kristen Dante, general manager of her father’s billion dollar hotel.
Billy instantly becomes smitten with the no-nonsense Kristen. She forgives him when he messes up, but expects him to learn from his mistakes. With her, Billy finds a safe place to land. Even if he screws up the landing. She might be serious when it comes to running her business, but Billy makes her laugh. The fact that he promised his mother he’d quit swearing doesn’t hurt his chances either.
I think it’s safe to say they balance each other out. And sometimes, I think all we need is a little balance in our lives. J
Here’s a little snippet of Billy and Kristen after he tricks her into wearing a sexy dress she normally wouldn’t consider an option.
A ferocious beating clobbered the inside of Kristen’s skull. “Excuse me?”
“Yes?”
“My security is fine?” She refused to so much as glance at the dress in the window. Otherwise, she’d kill him. She’d been bamboozled. “You said you’d check my security. That was the deal.”
“Yes. And I have checked your security. The terms of our deal have not been violated.”
“Bastard!”
“You’d better quit saying that.” He stepped closer—too close. Close enough to ignite a yearning for something she knew would be a disaster. He pressed his lips right against her ear and whispered, “It’s kinda turning me on.”
Heat rushed into her face. Placing one hand on his chest, the rock hard chest she wanted to take a pick ax to, she shoved him back a step. “If you’d told me up front the security was adequate, I’d have never made that deal.”
“Exactly.”
“Exactly my butt.”
Billy laughed. “And a lovely butt it is.”
Now the panic, deep and rooting, had set in. He’d completely manipulated her. “You knew I was feeling desperate and you used it to get what you wanted.”
He sighed, as if this conversation was nothing but a bother. “You got what you wanted. You wanted to ensure your security would hold up and it will. I’ll guarantee that. Isn’t that worth one night of wearing an incredible dress? Besides, I’ve been feeling desperate since the moment I put eyes on you. My desperation comes from a different place though.” He grinned. “Much different, but we won’t get into that right now.”
“I’m…I’m… Gah.”
She spun away and stormed off. This man was the biggest colossal pain in the butt to ever enter her hemisphere. He’d bullied her into this deal. She should renege. Tell him to buzz off. She’d entered into the agreement under false pretenses. Had she known the security was fine, she’d never have agreed. Shame on her for trusting him, a total hit-and-run driver of a womanizer, a self-admitted master at seduction.
“Shall I grab the dress for you?” he called after her.
“I hate you, Billy Tripp.”
Billy appeared in her office doorway two hours later and propped himself against the doorjamb. “Have you cooled off yet?”
Not. One. Bit. She cocked her head and pasted a smile on her face. “Certainly. Come in.”
“Oooh, that’s a rather frosty greeting from such a hot woman.”
“You’ll survive. What can I do for you?”
“You’re still pissed at me. Can we put it aside for a couple of minutes? Gotta talk to you about the cars disappearing.”
“Whatever you want, Billy.”
He put his hands up. “Hey, now. Don’t say that. What I want is you naked and horizontal on this desk.”
Just how insane could this man possibly be? Kristen closed her eyes and grunted. She wouldn’t lose it on him. She wouldn’t. He lived for this. The provoking. The battle. The clash of wills. He truly got off on it and the more she screamed at him, the more he goaded.
“Don’t forget that filter.”
“You’re right. I take back the horizontal thing. Naked still goes though.”
Kristen finally laughed. As much as she wanted to hurl something at him, she had to admit he entertained her. In a sick, torturous, demented way, she found this free-spirited, annoying, chaos-inducing man attractive.
That couldn’t be good.
Adrienne will be giving away a digital copy of RELENTLESS PURSUIT to one lucky person who comments...or also needs balance in their life. :)

Adrienne’s books available at:
Amazon
Barnes and Noble
Bio: Adrienne Giordano writes romantic suspense and women's fiction.  She is a Jersey girl at heart, but now lives in the Midwest with her workaholic husband, sports obsessed son and Buddy the Wheaten Terrorist (Terrier). She is a co-founder of Romance University blog and Lady Jane's Salon-Naperville, a reading series dedicated to romantic fiction. For more information on Adrienne's Private Protectors series please visit www.AdrienneGiordano.com. Adrienne can also be found on Facebook at http://www.facebook.com/AdrienneGiordanoAuthor and Twitter at http://twitter.com/AdriennGiordano.
Giveaway ends 11:59pm EST Aug. 14th. Please supply your email in the post. You may use spaces or full text for security. (ex. jsmith at gmail dot com) If you do not wish to supply your email, or have trouble posting, please email maureen@justromanticsuspense.com with a subject title of JRS GIVEAWAY to be entered in the current giveaway.
Posted by Maureen A. Miller at 4:00:00 AM