Way Out Of Line

By: Trish Jackson
Congratulations to "Janet K", the winner of Trish's giveaway. Thank you to all who participated.
I grew up in Africa, and like other fiction authors, I write about things that have made a lasting impression on me, whether they are real or imagined. Something about a place I've visited—was it spooky? Did a shiver run through me for no apparent reason when I was there? Maybe it took place in a dream—a romantic tryst with an unbelievably gorgeous man, perhaps… Or was it something sinister I witnessed?
When I sit down and start tapping out a new novel, I often wonder where the story comes from. The characters are so real they actually take over and tell me what to write. (Is it true only writers and schizophrenics listen to the voices in their heads?) These are people I've never met before—figments of my imagination—or are they? Could they be memories from a past experience—or even further back from a past life? It's a question that will remain unanswered until someday, someone is able to unlock the secrets of our subconscious minds. 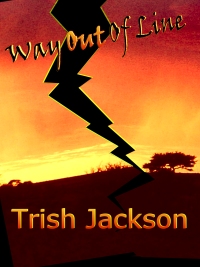 Africa is vibrant, violent, savage and mystical. It pulses with its own unique rhythms and energy. My novel, Way Out Of Line, was first published in 2003, and I am thrilled to have it back on the market.
It's about two kids from Texas whose lives change exponentially when sassy, fifteen-year-old teenager Trent McNaughton tells handsome college student Hal St. Clair she's seventeen. Hal gets one of those messages from the little voices in his head, telling him to end their relationship, but Trent is really, really cute—and very persuasive.
Hal's imprisonment for statutory rape devastates both of them. Trent follows a dangerous path of self-destruction in an attempt to expiate her guilt.
Their love endures the passage of years, until fate brings them together again in the African wilderness. They are literally in the middle of nowhere, they don't know how to get back to civilization, and their only means of transport is totaled by a land mine. They have to proceed on foot, where they face the choice of being shot by militia or swimming across a flooding river filled with enormous crocodiles.
My other romantic suspense/comedy novel and its upcoming sequel are about rednecks—try and figure that one out!
I'm excited to be giving away an eBook copy of Way Out Of Line to one lucky person leaving a comment!
Thanks to Maureen—this blog rocks. Happy reading to all of you.
Excerpt from Way Out Of Line by Trish Jackson
They were rounding a narrow bend bounded by two thickly-wooded granite hills when the world exploded.
The Land Cruiser was catapulted into the air. It tumbled over and over, throwing Trent toward Hal, then against the door, against the floor, the roof, across the seats. She screamed, heard someone curse.
She felt herself hurtling into open space.
She landed hard. Air whooshed from her lungs. She couldn’t breathe. The screeches and crackles of tortured metal hurt her ears. The overpowering odor of cordite and hot metal burned her nostrils.
She gasped, forced herself to take a ragged breath, then another. Her ears rang. Everything had gone quiet. Even the cicadas had stopped screaming. She lay where she fell, stunned. Her jagged thoughts slowly regained focus. A metallic taste told her she had bitten her tongue. She stared at her scraped and bleeding palms. After a while she rolled over, dragged herself stiffly onto her feet and gazed around.
The Land Cruiser, twisted and torn, lay at an angle in a shallow gully beside the road. Acrid smoke curled upward and mingled with clouds of dust.
"Hal? Where are you?" Please don’t let him be in the Land Cruiser. No one in that mangled lump of metal could be alive. "Hal? Hal! Answer me, please, Hal."
She shuffled heavily toward the vehicle, her own shock forgotten.
He wasn’t inside. She turned slowly, looking in all directions. A glimpse of blue. His shorts… through the long grass down in the wash. She stumbled down the uneven banks and fell to her knees beside him. He didn’t respond to her voice. She touched his face. He didn’t move. He was so pale. Blood oozed from a gash on his head.
"Hal, you can’t die. You’re the only good thing that’s ever happened to me. Please. I love you so much, I can’t lose you now." She felt for a pulse in his neck. Held her breath until she found it.
It was thin and thready.
http://www.trishjackson.com
https://www.facebook.com/redneckpi
http://romanticreviewramble.blogspot.com/
Giveaway ends 11:59pm EST Sep. 1st. Please supply your email in the post. You may use spaces or full text for security. (ex. jsmith at gmail dot com) If you do not wish to supply your email, or have trouble posting, please email maureen@justromanticsuspense.com with a subject title of JRS GIVEAWAY to be entered in the current giveaway.
Posted by Maureen A. Miller at 12:24:00 AM