Using Description to Draw the Reader Deeper Into the Story


Description in a novel can be as dry as bone dust or read like a laundry. But done right, description can draw a reader deeper into the story. Description is as much about the feeling, person or object being described as it is about the character doing the actual describing. This is what writers call deep point of view, taking the reader into the head and heart of a character. Deep point of view allows the reader to see and feel every aspect of the story through the characters experiences, thoughts and feelings. 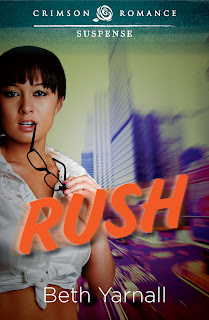 Here’s an example from my debut novel, Rush. This is the first time the heroine, Mi, sees the hero, Lucas.


Mi turned to follow Crosby and caught sight of a man she’d never seen before, standing against the wall just out of the reach of the stage lights, his face fully shadowed. He was large—well over six feet tall and as broad as a doublewide. Something about the way he stood still, yet humming with energy, caused an answering rhythm to thrum from deep inside her. Her pulse kicked up, generating a near fight or flight sensation that sent her senses into overdrive. Who was he? What was he doing here?


What can we surmise about Mi from this excerpt? Because let’s face it, this description is all about her, not Lucas. It’s about her thoughts and emotions. She describes him as ‘broad as a doublewide’. This tells us something about her background, doesn’t it? She didn’t say ‘broad as columned porch’ or ‘broad as a mansion gate’. The excerpt also tells us about her emotions. She’s frightened and maybe a little titillated, right? She’s attracted to this stranger and that attraction scares her. She’s curious about him— Who is he? What was he doing here? And we get the feeling that she’s going to do whatever it takes to find the answers to her questions.
And now for the male point of view. In this snippet Lucas has just found out some information that puts Mi’s honesty in question. And then he sees her.


Mi came out of the makeup room and glanced around until she spotted him. She smiled, her face lit with what looked like genuine pleasure at the sight of him. His forehead hurt and he realized he was scowling back at her. As she neared, he lost all perspective, his vision narrowing down to a point that began and ended with her as though she were a single candle in a darkened room. She came even with him and he realized he’d forgotten to breathe. With his sudden intake of air came the recognition that this tiny woman could do him more harm than a grenade strapped to his chest. It scared him even more that he might be willing to take that risk.
What do we learn about Lucas’s emotional state here? He’s angry. The scowl says that. Mi distracts him, too, right? He forgets to breathe and doesn’t realize he’s scowling at her until the pain in his forehead registers. She unnerves him. He doesn’t think this outright but we get it from how he compares her to a grenade strapped to his chest. The grenade reference is telling, too. If we didn’t know he was ex-military, we might guess it here. What else does this passage tell us about Lucas? He’s coming to care for Mi, right? Even though he thinks he’ll get hurt, he’s willing to take the chance just to be with her. That’s a powerful revelation and it frightens him.
The key to description is to let the characters do it, not the writer. It’s not me, the author, describing Lucas to Mi, it’s Mi describing Lucas for the reader. And it’s not me describing Lucas’s emotions, it’s him letting us into his thoughts and through his thought process we know not only what he’s thinking, but what he’s feeling. Using description to achieve deep point of view is one of the most powerful tools an author can use. I hope you’ve enjoyed this little peek into the writer’s toolbox.


Now it’s your turn. Tell me, what draws you into a story? Is it the plot, the characters, the setting or something else entirely? I will be giving away a digital copy of RUSH (Kindle or Nook) to one lucky person leaving a comment!

Rush
Someone is stalking Miyuki Price-Jones.


As the host of a very successful home shopping TV show that sells adult toys, Mi has become the object of an ex-con’s obsession, requiring the services of ex-Navy SEAL turned bodyguard, Lucas Vega. As the attraction between Lucas and Mi grows, Lucas has a difficult time keeping his feelings for Mi separate from his mission to keep her safe. A mission that is more challenging than anyone could have predicted.


Damaged by their pasts, Lucas and Mi find more in common then they could have imagined and secrets they thought would tear them apart could be the ties that bind them together forever. But with the stalker growing bolder, Lucas and Mi must learn to trust each other or risk losing more than their hearts.


One of them could lose their life.


Beth Yarnall writes romantic suspense, mysteries and the occasional hilarious blog post. Beth lives deep in the heart of `The O.C.' California with her husband, two sons, and their dog where she is hard at work on her next novel. For more information about Beth and her stories please visit her website- www.bethyarnall.com. She loves to connect with readers on Facebook- https://www.facebook.com/pages/Beth-Yarnall/187061544661981 and Twitter- @BethYarnall

Giveaway ends 11:59pm EST Aug. 30th. Please supply your email in the post. You may use spaces or full text for security. (ex. jsmith at gmail dot com) If you do not wish to supply your email, or have trouble posting, please email maureen@justromanticsuspense.com with a subject title of JRS GIVEAWAY to be entered in the current giveaway.