Confessions Of A Chronic Insomniac

By: Melinda Leigh
Congratulations to "Judi L" and "Janet K", the winners of Melinda's giveaway. Thank you to all who participated. 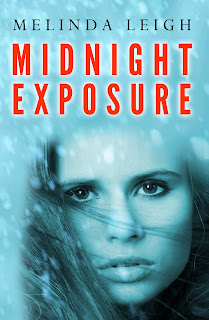 How did insomnia help create Midnight Exposure? It wasn’t the way you’re thinking. I didn’t stay up all night writing the book. Like many writers, I suffer from periodic bouts of relentless insomnia. Maybe because we can’t turn off the stories in our heads?  Whatever the reason, unfortunately for my productivity, I’m generally useless in the middle of the night.
The big question I get from other people is how do I function on so little sleep?  I’m really sure about the answer to this one. There are days when I feel like a robot, when the only thing I can think of beyond late afternoon is how long until I can close my eyes.  But most of the time, I just deal. I’m used to it. I know I’ll sleep eventually.
But what if I couldn’t? What if sleep became impossible?
One particularly difficult week, I called up the worst thing hypochondriacs ever found in the middle of the night, the Internet.  In my research I came across an actual disease that keeps people from sleeping AND gives those afflicted hallucinations, delirium, and confusional states like that of dementia.  Fatal Familial Insomnia is a prion disease in which lesions form in the thalamus, preventing sleep. It is extremely rare. The gene is found in only 40 families in the world, and there have been only a handful of documented cases.
Can you imagine not sleeping at all for months? Even worse, there is no treatment or cure for FFI.  It is a death sentence. Now, can you imagine passing this gene unknowingly on to your children?
One of those what if light bulbs went off in my head, and the villain of Midnight Exposure magically attained motivation. Except he isn’t as villainous as some. He’s driven by the desire to save his family from the genetic disease that plagues them. But once the delusions take hold, his motivation can’t compensate for the terrible deeds he commits.
In order to fit the disease into my plot, alterations were necessary. I ended up inventing my own disease and creating my own set of progressive symptoms. But the science behind the affliction is real, and I think that makes it even more frightening.
Midnight Exposure released August 21.
Point, click, die.

When two hikers disappear, their hometown in Maine blames the blinding storms. But the truth is far more sinister. Unaware of the danger, tabloid photographer Jayne Sullivan follows an anonymous tip to find the most reclusive sculptor in the art world. Instead, she finds sexy handyman Reed Kimball—and a small town full of fatal secrets.

Five years ago, Reed buried his homicide detective career along with his wife. But when a hiker is found dead, the local police chief asks Reed for help. Why was a Celtic coin found under the body? And where is the second hiker? Avoiding the media, Reed doesn’t need a murder, a missing person, or a nosey photographer. Then Jayne is attacked, and her courage is his undoing. Reed must risk everything to protect her and find a cunning killer.

Melinda Leigh is the author of She Can Run, a best-selling romantic suspense novel that was nominated for a 2012 Thriller Award.  Learn more about Melinda at her website melindaleighauthor.com. Find her on Facebook and Twitter.

Melinda will be awarding 2 signed ARCs of  Midnight Exposure   to two lucky people commenting about their sleeping patterns.

Giveaway ends 11:59pm EST Aug. 26th. Please supply your email in the post. You may use spaces or full text for security. (ex. jsmith at gmail dot com) If you do not wish to supply your email, or have trouble posting, please email maureen@justromanticsuspense.com with a subject title of JRS GIVEAWAY to be entered in the current giveaway
Posted by Maureen A. Miller at 12:32:00 AM