Why I Write in Third Person Omniscient

By: Michelle Grogan
As an avid reader I read quite a lot of books written from a variety of points of view, but when it comes to my own writing, I find I prefer to write in third-person omniscient. I started thinking about this after reading an article in The Writing magazine titled “Possibilities abound with third person” by Brandi Reissenweber in the August 2012 issue and it got me to thinking about why I prefer to write in third-person omniscient.
Third-person omniscient is defined as “a method of storytelling in which the narrator knows the thoughts and feelings of all the characters in the story…may bring to life an entire world of characters” (fictionwriting.about.com/od/glossary/g/omniscient.htm). This definition explains exactly why I prefer to write in the particular POV – I love being able to get into the heads of my characters, to show my readers what my characters are thinking and feeling. For me, I feel that third-person omniscient really lets you form a bond with the characters, to really feel like you know all the major players on the canvas and to get a real feel for what’s going on.
Now, I am by no means a POV snob – many of the books I read are not all written in third-person omniscient. Take James Patterson and Veronica Roth, who both tend toward first person – the story told by the main characters through their eyes. This is not a POV I have experience writing in, but I am the kind of writer who is willing to step outside my comfort zone – in this case writing predominantly in one POV – and write something in a different POV…you never know where it might take you!! 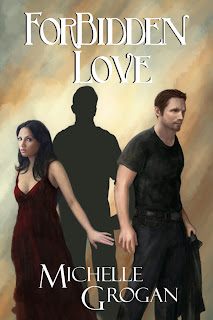 Forbidden Love is the story of Jessica Alvarez, a young woman determined to take control of her life from a father who spent who has protected her and shielded her from the dangerous world he inhabits. It’s about Jake Rousseau, a man who does what he does out of loyalty; a man who isn’t ready to give his heart to another woman after losig the one he thought he would spend the rest of his life with. It is about Luis Alvarez, a father intent on keeping his daughter safe at all costs - even if she hates him for it. It is the story of a man willing to do anything it takes to wrest a small town from the clutches of organized crime.
In this modern play on William Shakespeare’s Romeo & Juliet, one young woman will be forced into a tug of war between the man she loves, the father who wants to protect her, and the man who will do anything - anything - to get what he wants . . . no matter the consequences. But in the end, will she succumb, much like her Shakesperean counterpart, to the ravages of two warring families, or will she rise above it all in order to have the life and love she wants?
Posted by Maureen A. Miller at 3:11:00 AM