Walking The Lanes In Ireland

Congratulations to Pat S., Jackie M. and Mary C., the winners in Carla's giveaway. Thank you to all who participated!

It's almost August? Where did July go? I swear I can smell snow in the air! Okay, that's an exaggeration. It's been a fun, busy summer of writing, traveling, gardening and—best of all—getting ready for our daughter's second baby (a girl!), due in mid-September. Little Leo is now three, into Thomas the Tank Engine. We were in Ireland when he was born, three weeks early. We got the call at the Hertz car rental counter at the Shannon airport as we rushed home. 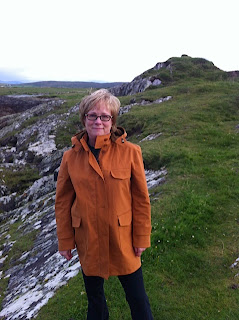 We were in Ireland again in July, walking on lanes in the tiny bayside village where Leo's and his soon-to-be-born baby sister's paternal great-great-grandfather was born. They and their dad still have family there. It's an incredibly beautiful spot. I  love to let my mind wander as I walk for miles in the Irish hills.

In fact, Finian Bracken, the Irish priest and whiskey expert who appears in SAINT'S GATE, the launch book of my Sharpe & Donovan series, and now HERON'S COVE, came to life during my time in Ireland. Finian ends up serving a parish in a small Maine fishing village and becoming friends with Colin Donovan, an FBI deep-cover agent, and Emma Sharpe, an FBI art crimes expert and former nun.

When HERON'S COVE starts, Colin is on assignment and hasn't been heard from in too long. Finian gathers her and Colin's three rugged brothers for a whiskey tasting. Here's how the story starts:

With three Donovan brothers and an Irish priest watching her, Emma Sharpe choked back her sample of the smoky single-malt Scotch—her sixth and last tasting of the night. "Intense," she said, managing not to slam the tulip-shaped nosing glass on the table and grab the pitcher of water. Give it a few seconds. She was an FBI agent, after all. Tough as nails. She smiled at the four men. "People pay to drink this one, huh?"

"Dearly," Finian Bracken, the Irish priest, said. "You're not one for a heavily peated whiskey, I see."

Emma tried to distinguish the other flavors of the sample—spices, fruits, whatever—but only tasted the peat. "I don't know if I'm one for a lightly peated whiskey, either."

A cold wind penetrated Hurley's thin walls and sprayed the old windows with salt water and rain. The restaurant, a fixture on the Rock Point harbor, was basically a shack that jutted out over the water. Now only a few lights penetrated the dark night and fog. Finian had organized the impromptu tasting, setting up on a back table away from what few diners were there on a windy, rainy late-October Friday. He and Michael, Andy and Kevin Donovan were already gathered over a half-dozen bottles of highend whiskey when Emma had arrived in southern Maine an hour ago, up from Boston and her job with a small, specialized FBI unit.

Only Colin, the second-born Donovan, wasn't in Rock Point. Mike was a Maine guide, Andy a lobsterman and Kevin a state marine patrol officer, but, like Emma, Colin was an FBI agent.

Not like me, she thought.
She specialized in art crimes. Colin was a deep-cover agent. He'd left his hometown a month ago, pretending to return to FBI headquarters in Washington. The true nature of his work was known to only a few even within the FBI, but his brothers had guessed that he didn't sit at a desk. Initially he'd kept in touch at least intermittently with his family and friends—and Emma—but for the past three weeks, no one had heard from him.
The silence was far too long, not just for his family and friends but for the FBI.
And for Emma.

I hope you enjoy SAINT'S GATE and HERON'S COVE! I'm working on DECLAN'S CROSS now...which starts out in Ireland…

Thanks so much for your time, and happy reading,
Carla

Carla would like to hear from you. Stop by and say hi, or share a tale where you have been away and missed an event back home.


Carla will be awarding three prizes, a hard cover of her new release, HERON'S Cove, a paperback of SAINT'S GATE and a T-shirt!


Giveaway ends 11:59pm EST July 31st. Please supply your email in the post. You may use spaces or full text for security. (ex. jsmith at gmail dot com) If you do not wish to supply your email, or have trouble posting, please email maureen@justromanticsuspense.com with a subject title of JRS GIVEAWAY to be entered in the current giveaway. This giveaway is for US and CANADA mailing addresses only.

When your safety depends on living a lie. . .


After escaping certain death, deep-cover agent Colin Donovan is back home on the Maine coast with his new love, FBI art crimes expert Emma Sharpe. Then Tatiana Pavlova, a London-based jewelry designer, arrives in Heron’s Cove, asking for Emma’s help–a prized collection from a lost era of Russian opulence, decadence and rare beauty has resurfaced, and Tatiana warns Emma it’s about to be stolen again. And Colin realizes his nightmare isn’t over. It’s just begun.


Emma guards her past closely, and Colin is determined to unlock her secrets. As they investigate the mysterious collection and the equally mysterious Tatiana, they confront their greatest challenge. Now they must count on their expertise–and each other–to outwit an enemy who wants to destroy them and everyone they love most.


Who can you afford to trust?