Dreams and Goals and Lists, Oh My!

By: Robin Perini
Congratulations to "Tammy Y", the winner of Robin's giveaway.  Thank you to all who participated!
Thanks so much to the folks from Just Romantic Suspense for inviting me. It's always a great honor to visit.
This blog has a sad beginning…but bear with me. Last month something quite sobering happened in my office. A gentleman I'd worked with for several years was visiting family overseas and died of a heart attack. He was fifty-three years old. Fifty three.
After the shock and grief waned a bit, I had to stop and process. At one time in my life fifty-three might have seemed old to me. But not anymore. The average life expectancy in the United States is in the seventies according to the tables I reviewed for this article. My grandmother lived well into her 90s. This man lived a little more than half as long as my grandmother. I was reeling at the reality.
This sad event also got me to thinking about some practical questions because I'm a practical kind of gal: wills, power of attorney, and all those mundane things in life that I do that only I know about. It's second nature to me…but what if…I think I have some work to do there.
While the list-maker in me started on the practical goals, the dreamer in me took over. Carpe Diem—Seize the day!
As all of us are, I'm busy. Job, family, second job (writing). In many ways I'm living my dream right now. But then I started imagining a bit… http://pinterest.com/pin/153755774748674109/ 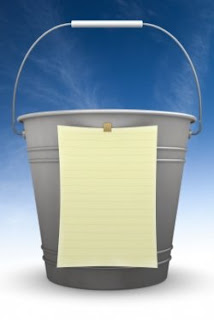 What else do I want to do? In other words, what's on my bucket list?
And I realized, my bucket list has always been in my head. So, I'm using this blog today to start a 'real' bucket list. Here are five things I really want to do someday…and now I wonder if that someday shouldn't be after I retire! I want someday to begin soon.
1.      Be a published author (okay…did it! And am still doing it. YAY!)
2.      Take an Alaskan Cruise
3.      Go snorkeling in Hawaii
4.      Visit a Mayan temple
5.      Visit my family's ancestral home in Italy
Hmmm….I want to visit a lot of places. There's only one way to make those things happens, isn't there? Save some, plan some, and go for it!
So, starting today, I'm putting some pennies aside…or maybe the cost of a Starbucks for my bucket list. How about you?
I would love to hear from you, dear readers. What are your goals and dreams? What do you imagine? What's one thing on your bucket list and what do you have to do to check it off? Comment and you'll be entered to win a copy of my latest release, Cowboy in the Crossfire from Harlequin Intrigue® as well as trading cards from all my books.
Thanks for stopping by! 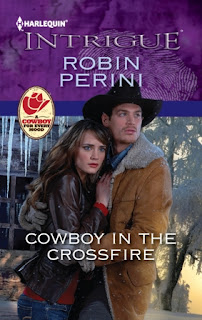 COWBOY IN THE CROSSFIRE
SHE’S THE ONE PIECE OF HIS PAST THIS COWBOY CAN’T ESCAPE
Unjust accusations shattered Blake Redmond’s big-city police career—and destroyed everything around him. Now, all this sheriff lives for is keeping watch over his small Texas town…
until Amanda Hawthorne and her five-year-old son come fleeing out of a snowstorm with killers on their trail. The terror Blake sees in the young boy’s eyes makes Blake swear to protect him
and his injured mother. But winning Amanda’s trust is as difficult as resisting the passion drawing him to this beautiful, determined woman. With their every move thwarted and time
running out, the only way Blake can clear his name and save this little family is to confront his own dangerous past— no matter what the cost.
EXCERPT
A wicked gust of winter wind buffeted Amanda Hawthorne toward the front entrance of her brother's home. She wrapped her flimsy coat tighter around her body and lowered her head. Another cold blast nearly knocked her down. Even the weather fought to keep her out of Vince's house. Well, this freak ice storm wouldn't win, and neither would her brother. He'd be furious, but she was staying. Just until she found another job.
She breathed in, hoping to kill the perpetual French-fry smell that permeated her clothes from her final shift at Jimmy's Chicken Shack. She could have lived with the odor and her aching feet, but she couldn't take his octopus hands, his foul breath or his large body trapping her against the wall in his storage room. She shuddered at the memory. She wouldn't go back. But first, she had to face Vince.
With a deep breath, she unlocked the door. "Big brother, I've got bad news. You may have houseguests for a while—"
Her voice trailed off. The photos that had lined the entryway hall lay shattered on the tile floor. The small table near the doorway teetered on its side, crushed.
"Vince?" Her heart thumped like a panicked rabbit.
She ran into the living room. The place was in shambles. "Ethan?" Oh, God. Where was her son?
She rounded the couch and skidded to a halt. Vince lay on the floor in a pool of blood, eyes staring up at her, sightless. A hole in his chest, a gun in his hand.
Her knees shook and she swayed. No.
She whirled around the room, frantic, searching. "Ethan!" she screamed. He had to be here. He had to be okay. He was only five. "Ethan, where are you?"
Deadly silence echoed through the house. Her body went numb. This couldn't be happening. Her son was her life.
Then she saw it. A small, bloody footprint on the wood floor. Streaks of red trailed across the carpet toward the entertainment center. So much blood. Too much blood.
[Cover Art Copyright © 2012 by Harlequin Enterprises Limited. Cover art used by arrangement with Harlequin Enterprises Limited. All rights reserved. ® and ™ are trademarks owned by Harlequin Enterprises Limited or its affiliated companies, used under license.]
BIO
Award-winning author Robin Perini is devoted to giving her readers fast-paced, high-stakes adventure with a love story sure to melt their hearts. Her mission's motto: "When danger and romance collide, no heart is safe." After seven prestigious Romance Writers of America® Golden Heart® finals, Robin sold seven novels within one year. She won the Golden Heart® in 2011, and that title became her first Harlequin Intrigue, Finding Her Son (March 2012). Residing in the southwestern United States, by day, she works for an advanced technology corporation, and in her spare time, you might find her giving one of her many nationally acclaimed writing workshops or training in competitive small-bore rifle silhouette shooting.
She is the author of In Her Sights (Montlake, 2011), Finding Her Son, Cowboy in the Crossfire and Christmas Conspiracy (Harlequin Intrigue 2012). In 2013, she begins a new series for Montlake, called Montgomery Justice, and later that year two more books for Harlequin Intrigue set in the fictional town of Carder, Texas.
Robin loves to interact with readers. You can read excerpts, read reviews, sign up for her quarterly newsletter and mailing list, and even request trading cards or a Kindlegraph on her website at www.robinperini.com. She's also on Twitter, Facebook, Goodreads and Pinterest. She'd love to hear from you.
Giveaway ends 11:59pm EST July 8th. Please supply your email in the post. You may use spaces or full text for security. (ex. jsmith at gmail dot com) If you do not wish to supply your email, or have trouble posting, please email maureen@justromanticsuspense.com with a subject title of JRS GIVEAWAY to be entered in the current giveaway.
Posted by Maureen A. Miller at 4:49:00 AM