Who Is Adrienne's Favorite?

By: Adrienne Giordano
**FREE giveaway for everyone!**
At a recent book signing, a reader looking over the various hot men on my covers (J) asked which of "my guys" was my favorite.
That's like asking a parent who their favorite child is. I dutifully replied that I loved them all. To this, she offered me a whopping eye roll. After sharing a laugh over my inability to pick my favorite hero, I explained my position.

Vic Andrews, the hero in Man Law, is my irreverent guy. I often joke that I'd like to be Vic when I grow up. He goes after what he wants and generally leaves no prisoners. Plus, I think he's funny. But, considering I created him, that might just be me. Michael (Risking Trust hero) is the protective sort. When it comes to his loved ones, he lets nothing get in the way of keeping them safe. Then there's Peter (A Just Deception). Peter, also known as "Monk", might be the most tormented of the bunch. He's my over-the-top alpha male who thinks he needs to take on everyone's problems. Then he has to fix them. He can't seem to help himself.
Which leads me to the hero in my latest release.  Gavin Sheppard is a former FBI hostage negotiator who would spend weeks talking a hostage taker down if it meant avoiding violence. Gavin isn't opposed to "going tactical", he just wants to make sure the good guys have explored all their options.
Gavin, a mere five-foot-ten (as opposed to Vic Andrews at six-foot-five), is at ease walking into a room filled with some of the biggest, baddest spec ops guys in the world. He understands his value. Even if the Taylor Security guys can outshoot him, he has the patience to outthink them.
And he knows it.
I believe that's Gavin's strength. His magic bullet. It's that special thing that makes me love him just as much as the other characters in this series.
Readers, do you have a favorite character from a book? What is it about that character that you love?
**As a special treat for the Just Romantic Suspense readers, everyone gets a FREE digital copy of Risking Trust, book one in the Private Protectors Series. Simply go to the Carina Press website, add Risking Trust to your cart and enter the coupon code RSAGFREE at checkout. The free download will be available between 12:00 am – 11:59 pm EST on June 1st only. If you have any problems (or miss the deadline), feel free to email me and I'll get a copy of the book to you.** 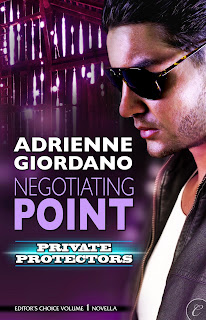 Excerpt from Negotiating Point:
Gavin dialed the number Janet had provided for Joe Smith and waited to see how this opening volley would go. More than likely, Joe would nearly soil himself when he realized who was on the other end of the line. After said soiling, Joe would hang up.
“Hello?” came a man’s voice.
“Joe?” Gavin asked, sounding like the guy’s best friend.
“Yeah. Who’s this?”
“This is Gavin Sheppard. I work for Taylor Security—”
Click. Gavin sighed—let’s play ball—and redialed. He turned to Janet. “He hung up.”
“Of course he did.”
The phone rang again, but went to voice mail. “He cannot believe I’m going away. Can he?”
Gavin settled into the folding chair behind him and hit Redial. Dipshit Joe Smith didn’t know Gavin had the tenacity to sit here all day dialing this number. He wouldn’t do that though. Soon, he’d deliver a throw phone, a dedicated line allowing the kidnappers to speak only with him.
He’d spend a week talking a hostage taker down if it avoided tactical assault. Vic was the tactical guy, always ready to take up arms. In the six months of Gavin’s employ at Taylor Security, he and Vic hadn’t yet figured out how to merge their expertise and play nice. Gavin didn’t necessarily have a problem with going tactical, but it meant all other attempts to resolve the situation had failed.
Gavin didn’t like to fail.
Going tactical also carried the highest risk of someone getting hurt. Or killed. In this case, that someone could be Roxann Taylor.
He redialed. Nothing.
Gavin stood, slipped a radio head-set on, walked across the width of the barn to the rectangular table where he found the case containing the throw phone. He grabbed it and the bullhorn sitting next to it. “I’ll be back. Hopefully.”
And when had he become so warped that he could be sarcastic about this? Probably after the hostage situation in Arkansas ten months ago. That fiasco wasn’t his screw-up but he was one of four FBI negotiators assigned to it.
The twelve dead people, all members of a cult murdered by their leader, were his motivating factor for leaving the Bureau after twelve years. At thirty-eight years old, he’d been aging fast in a job that was bleeding the life out of him.
Enter Mike Taylor and his ridiculously appealing offer.
“Be careful,” Janet called after him.
“I’ll use the guys to cover me. They’ll do that stacking thing they love with the shields and I’ll throw the phone through a window.”
Janet jumped from her chair. “Hang on. You need a vest and helmet.”
She grabbed a vest from the box on the floor and held it up for him. He propped the bullhorn under the arm where he held the throw phone and slid his free arm into the tac vest.
“Now the other arm,” she said.
“Yes, Mommy.”
She laughed. “Come to Mama, sweetheart.”
Adrienne Giordano writes romantic suspense and women's fiction.  She is a Jersey girl at heart, but now lives in the Midwest with her workaholic husband, sports obsessed son and Buddy the Wheaten Terrorist (Terrier). She is a co-founder of Romance University blog and Lady Jane's Salon-Naperville, a reading series dedicated to romantic fiction. For more information on Adrienne's books please visit www.AdrienneGiordano.com. Adrienne can also be found on Facebook at http://www.facebook.com/AdrienneGiordanoAuthor and Twitter at http://twitter.com/AdriennGiordano.
Adrienne's books are available at:
Carina Press
Amazon
Barnes and Noble
Posted by Maureen A. Miller at 4:00:00 AM