TAKING IT TO THE EDGE

By: Jaime Rush
Congratulations to Martha, the winner of Jaime's giveaway. Thank you to all who participated.
I've always been drawn to the dark side. Maybe it was those MAD magazines my dad left around for me to read (And those nightmares about Alfred E. Neumann's head floating outside my bedroom window!). Or that a childhood friend was murdered by her own father, along with her brother and mother. Or maybe I was just weird right from the get-go. One of my first stories, written at around age seven, was called PATHWAYS TO DEATH. A man, a castle, a witch and a puppy. Hey, what can I say, I was seven.


I was also fascinated by the unknown, the weirdness that inhabits our world. Like psychic abilities, near-death experiences, and membrane theories about the possibility of parallel universes. I've written about all of those things over the years, tying them into a suspense plot with a romance at the heart of it. In my Offspring series, from Avon Books, I've had a lot of fun twining these concepts into an X-Files meets LOST meets Friends ride. A group of twenty-somethings live ordinary lives but possess extraordinary psychic abilities. They are the Offspring of parents involved in a mysterious experiment gone awry. Sexy…dangerous…outcasts… They are being hunted by the government and others like them. Together they must find the truth and fight an enemy out to destroy them. 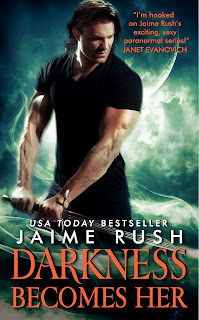 DARKNESS BECOMES HER spins off into a slightly new direction, as we get to know Lachlan, who appeared briefly in the previous stories. His addiction to astral projecting mistakenly caused the death of someone he loved. Now he lives in the shadow of his own self-imposed prison, stripped of his abilities. But when he gets a spontaneous vision of his brother's death at the hands of the woman he's infatuated with, Lachlan sees a chance to redeem himself by saving him. Jessie, however, is not a crazed murderer but a woman being hunted by a supernatural being. When he takes on her war, he takes a bigger risk than being killed. Because falling in love with the woman his brother cares about will destroy the honor he's trying so hard to revive.
I love stories about redemption, especially when it's wrapped up with honor, love, and a big dose of danger.
Darkness Becomes Her, Book Six of the Offspring Series
Avon Books, June 2012 (ISBN 978-0062018922)
A man beyond redemption. A woman beyond hope. And a battle that will either kill them...or bring them back from the edge.
Lachlan McLeod has a mission: find the beast who put his brother into a coma. He'll start with Jessie Bellandre, his brother's girlfriend, who's harboring a dark, dangerous secret that could get them all killed. But as they plumb the depths of Darkness, and the light he didn't know existed in the shadows of his heart, not falling in love with her will be as hard as staying alive.
Here's a sneak peek:
Jess waved her hand. "Go on, do whatever you were doing. Pretend I’m not here.”
Lachlan made a sound suspiciously like a grunt. “Then you’d better close your coat.”
She jammed the edges together, her cheeks warming at the cleavage she'd been showing, and quickly changed the subject. "The bruises. Did I do those?" She walked up to him, taking a closer look at the ugly purple bruises on his shoulder.
He looked at them. "You fight like a hellcat."
She couldn't help herself, reaching out and gently touching the skin next to the bruised area.
He flinched but didn't move away. "Don't touch me."
She met his gaze at the soft order. "Does it hurt?"
"Yes."
Her fingers barely grazed skin that had no bruising. She let her hand drop and walked to the place he’d indicated before.
He faced an imaginary opponent, bringing his sword around. He pretended to meet his enemy's sword, his blade pointing downward. Then, rotating the sword above his head, he delivered a fatal, slashing blow.
The sword was black metal, with what looked like a playing card’s spade at the base of the handle. What she thought were hand guards were angled toward the blade. The metal was pitted and looked forever old. He was liquid motion, steel strength, and she could see how he maintained his lean but muscular physique. Her chest tightened as she watched, and that odd sensual heat curled through her like tendrils of fire.
He ran toward the far wall as though he intended to barrel right through it. At the last second, he tucked his sword to his side and ran right up the wall, doing a complete flip until he landed on his feet again.
“Show off,” she said with a smile.
He slid her a look. “I’m pretending you’re not here, remember?”
“Oh … right.”
She'd put her hand to her chest, her fingers clutching the edges of the coat. If she watched him the whole hour he planned to be in here, she'd be a puddle on the floor. That every now and then he slid a glance her way made it even harder. She actually didn't get the sense he was showing off. Between those glances, he was focused, eyes as hard as the steel of his blade. He hated whoever he imagined as his opponent. Every thrust, every slash, carried the extra energy of that enmity.
"Who are you pretending to engage?" She followed his gaze to the mirror, seeing the recipient of that hatred.
He didn't answer, just gritted his teeth and kept fighting.
"You're fighting yourself, aren't you?"
He grunted, neither confirming nor denying.
He had gone beyond grief and self-recrimination to punishing himself with meditating in the cold, these brutal workouts, and that bare room. Cutting off his desires, a psychic castration.
But she had made him respond.


Author bio:
Missing the romance, relationship drama, and action of her favorite television shows, X-Files, Roswell, and Highlander, New York Times bestselling author Jaime Rush created her own mix in the Offspring series, from Avon Books. The Offspring: Sexy…dangerous…outcasts. They possess extraordinary abilities, and they're being hunted by the government. Together they must find the truth and fight an enemy out to destroy them. The first book in the series garnered a Reviewer's Choice Award from RT Book Reviews, and the most recent won three Top Picks. In early 2013, Jaime will debut a new paranormal romance series called The Hidden, from Grand Central Publishing.
Jaime Rush is also bestselling Tina Wainscott, author of eighteen novels for St. Martin's Press (now being re-released as e-books) and Harlequin. Contests, sneak peeks and more at www.jaimerush.com.
**Win a copy of Darkness Becomes Her! Just comment or answer this question to be entered: if you could have any extraordinary ability, what would it be and why?

(Independent giveaway not associated with the one listed above.) I'm celebrating the sixth book in her psychic romantic suspense series, DARKNESS BECOMES HER, with my Kick Butt First Line contest.  Shocking, suspenseful…make us want more!  Cash prizes! Contest runs from through January 1, 2012. For aspiring authors, it's a chance to get your name out there and add a "win" to your bio.  For readers, it's a chance to play at being a writer.  Even if you're not inclined to write a line, check out the entries—they're a lot of fun!  For details, go to www.JaimeRush.com and click on the Contest link.


**Giveaway ends 10pm EST June 5th. Please supply your email in the post. You may use spaces or full text for security. (ex. jsmith at gmail dot com) If you do not wish to supply your email, or have trouble posting, please email maureen@justromanticsuspense.com with a subject title of JRS GIVEAWAY to be entered in the current giveaway.
Posted by Maureen A. Miller at 4:10:00 AM