Congratulations to Janette, the winner of Tori's giveaway. Thank you to all who participated.

Today is my birthday. Yay! I love birthdays. It's also the birth of a new book, Blue Moon Over Texas, the second in the Lone Star Cowboys series, released just two weeks ago.

When I first started writing, I wrote straight romance. I thought that was what you were supposed to do. That first book, Lean on Me, finaled in the RWA Golden Heart contest. And while I liked it, I knew that in the next book I wanted something more. So I wrote a romantic comedy, Double Exposure. I sold that one to Red Sage, but while I loved it, I wanted to write something "more."

It wasn't until I stopped to analyze my reading habits that I finally figured out what that "something more" was. I read mostly romantic suspense and thrillers. Authors like Allison Brennan, TR Ragan, Lisa Gardner, Lisa Jackson. That's also what I watched on television. NCIS, CSI:NY, 24, and now my favorite, Flashpoint. While they're predominately crime shows, there's almost always a side romance going on somewhere.

Then I noticed that most of my started-but-never-finished manuscripts had an element of suspense in them. In some, it was a subplot to the romance, others were mostly suspense with a little romance, but in almost all of them it was a combination of both. So I set out to read, read, read. To study. To learn. 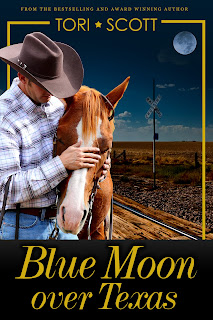 It scared me half to death to take the leap and write my first romantic suspense Lone Star Justice. But I loved it. I was hooked. I still had those unfinished manuscripts to finally finish and though some are predominately romance, they all have at least some suspense to them. The newest, Blue Moon Over Texas, started out as a western romance. But I couldn't write a straight romance. I tried, believe me. Though it's primarily a romance, I ended up with the heroine in jeopardy and the hero off to try and save her. It's what I call Romantic Suspense Light.
Here's a short excerpt...

From there Carol moved on to the dairy section, where she loaded up on milk, orange juice, butter, and sour cream. She'd just moved into the bakery when she felt someone move up behind her. Way too close behind her. She started to turn around, but a deep voice whispered in her ear.

"You can't stay glued to Reilly forever, you know. One day, when you least expect it, I'll be waiting, and you and I will finish what we started."

"We never started anything, you jerk."

Dalton's hand closed around her hair and tugged her head backwards. "You didn't dance like it was nothin'," he said. "Or were you just tryin' to make Reilly jealous? I don't take too kindly to bein' used."

"It was just a dance," she hissed. "Now let go of me and get out of here before Jake sees you. I don't want a fight in the middle of the store." She wanted so badly to tell him she knew he was behind the thefts, but Tommy had told her not to say anything about it if she saw Dalton again. If the man didn't know already that he was a suspect, then that gave them a little more advantage.

"What's he going to do to me with that bum leg of his? He can barely stand up."

"He gets that cast off on…" she almost said Monday, but caught herself just in time. "Tuesday morning, and then you'll see just how much damage he can do."

Dalton chuckled and gave her hair another sharp tug. "You'll lose on that bet, and soon."

They heard the whir of the motor coming down the aisle and Dalton released her and took off in the opposite direction. By the time Jake joined her, Dalton was long gone. But at least she'd had the chance to let him know they'd be gone on Tuesday. If he heard it from anyone else, that would be confirmation of what he already knew and he'd assume it was the truth. Still, she was shaking from both anger and a bit of fear when she turned to Jake.

He knew as soon as he saw her face that something had happened. She filled him in as calmly as she could, but he was on the phone to the sheriff before she'd finished.

"It won't hurt for Tommy to see if he can intercept him on the road."

She shook her head. "He's had too much head start. I'm beginning to think he's following us. How else would he know we were here? We don't normally shop on Sunday morning."

"I don't know. That's bothering me, too. Let's finish up here and get back to the ranch. I don't want to be gone too much longer now that he knows we aren't there."

Carol hadn't been afraid up to this point, but she was now. But fear would make her more cautious, and watchful. Hopefully that would work in her favor. She didn't want that man touching her, ever again.

If you'd like to read more, you can find Blue Moon Over Texas on Amazon, B & N, and Smashwords. And I'll give away a copy of both Blue Moon Over Texas and Blame it on Texas (the first book in the series), drawn from those who comment on this post and/or answer the question "What is your favorite occupation for a romantic suspense hero or heroine?"

Giveaway ends 9pm EST June 3rd. Please supply your email in the post. You may use spaces or full text for security. (ex. jsmith at gmail dot com) If you do not wish to supply your email, or have trouble posting, please email maureen@justromanticsuspense.com with a subject title of JRS GIVEAWAY to be entered in the current giveaway.
Posted by Maureen A. Miller at 4:31:00 AM