Internationally bestselling, RITA-award winning, author Karen Rose joins JUST ROMANTIC SUSPENSE to answer a few questions.
Given the nature of this site, I have to ask you what draws you to this genre.

I love romance in almost any form.  I started reading romance years ago.  I’d just returned to work from a 3-month maternity leave after the birth of my oldest daughter (now 22 years old) and my new job required I travel.  This was difficult with a new baby, but especially difficult as my maternity leave had been spent caring for my husband through his cancer treatments.  He was diagnosed when our daughter was 6 weeks old and at the time of my return to work was still undergoing chemo treatments.

I was 26 years old and constantly terrified.  I discovered the romance genre as I searched for books to distract me from my fear of flying, which predated all of the other drama, LOL.  I was hooked by the happy endings.  I *needed* the happy endings.  I needed a place to crawl into and escape my own life for a little while.
Romances did that for me.  My readers tell me it does it for them, too – gives them a place to escape.
I didn’t always write suspense, but I’ve always loved a good mystery.  My first unpublished attempts had elements of suspense but it wasn’t until an advisor said “You have a suspenseful voice.  Have you ever thought of writing RS?” that it even entered my mind.  I said, “No, but I’ll give it a try.”
I found my niche J.  Long answer to a short question:  I love the happy endings and the puzzle. 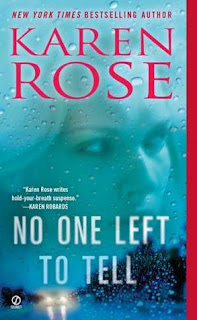 Your new release, NO ONE LEFT TO TELL is set in Baltimore. Have you ever written about a location you are unfamiliar with?


Not really.  I’ve at least visited the cities I write about.  In the case of Dutton, Georgia (the Vartanian trilogy), I made up the town, but I’d been to plenty of towns similar to it.


I have to hear the people talking in my head, so I have to have some familiarity with custom, speech patterns, etc.

I actually was born in Baltimore and grew up in the Baltimore/Washington area. Setting this series there was like going home. :)
Readers are delighted to discover characters from previous books popping up in your new books. Does it give you a little grin to draw up characters from the past, or have you meticulously planned this out years in advance?

Oh, totally a huge grin!  Sometimes there’s a little planning, but most of the time it’s a spur-of-the-moment thing.
Probably the furthest ahead I’ve ever planned is Paige’s appearance in NO ONE LEFT TO TELL.  Paige, the heroine in NO ONE LEFT TO TELL, is originally from Minneapolis and is first introduced in SILENT SCREAM.  After I’d written that book, I knew I’d be starting the new series in Baltimore, but I wanted Paige as a character.  I knew what I wanted her to become (a private investigator).  So when I wrote the epilogue for SILENT SCREAM (available on my website), I set up the situation where Clay and Paige meet at Evie and Noah’s wedding.  That was about two years before I wrote NOLTT, the most I’ve ever planned ahead!

Is there any danger in being a romantic suspense author?

Danger of what?  Hmmm…  I see threats all around me.  I have my friends convinced that serial killers lurk on Craig’s List (they do!).  When I see a situation that has the tiniest potential for danger, that’s the element I zero in on.

My husband can’t shop for a new freezer without wondering (idly, of course) how many bodies will fit inside.  Because he knows I’m thinking it while I’m eyeing the new appliances.

Maybe you meant from the research?  Nope, so far it’s been pretty safe!
Do you promise to keep writing more romantic suspense? I have learned through this site that there is a world full of Romantic Suspense fans out there.

I do promise, solemnly!  I have so many stories in my mind.  Just need more time to write them! 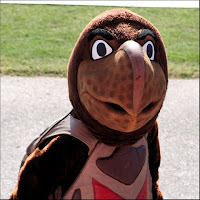 I understand you are a Terrapin. Tell me how much you adore that mascot.

Oh, Lord (she groans).  All the other schools have daunting, intimidating mascots.  (Well, maybe not the Golden Gophers.  Sorry, you Minnesotans, but you know it’s true.)  The University of Maryland has a turtle.  I mean, yeah, it’s kind of cute, but not very intimidating.  I did have a decal on the back windshield of my ancient VW Bug that was a test tube with a snarling turtle climbing out of it.  (Chemical Engineering School.)
Not so sure I’d use the term “adore,” LOL.  But my education served me well for a lot of years, turtle or not.


Thank you for stopping by to chat with us today, Karen. We love your books!

Internationally bestselling, RITA-award winning, author Karen Rose was born and raised in the Maryland suburbs of Washington, DC. She met her husband, Martin, on a blind date when they were seventeen and after they both graduated from the University of Maryland, (Karen with a degree in Chemical Engineering) they moved to Cincinnati, Ohio. Karen worked as an engineer for a large consumer goods company, earning two patents, but as Karen says, “scenes were roiling in my head and I couldn't concentrate on my job so I started writing them down. I started out writing for fun, and soon found I was hooked.”
Her debut suspense novel, DON'T TELL, was released in July, 2003. Since then, she has written eleven more novels and a novella. Her twelfth novel, YOU BELONG TO ME, was released in 2011.
Karen's books have appeared on the New York Times, USA Today, London Sunday Times, and Germany's der Spiegel bestseller lists, reaching #2 on the London Times' list and #1 on der Spiegel!
Her third novel, I'M WATCHING YOU, received the Romance Writers of America's RITA award for Best Romantic Suspense for 2005. Since then, six more books have been RITA finalists. To date, her books have been translated into twenty-one languages.
A former high school teacher of chemistry and physics, Karen lives in Florida with her husband of more than twenty years, her two daughters, a dog and two cats.
Posted by Maureen A. Miller at 4:00:00 AM