When She Wasn't Looking...

By: HelenKay Dimon
Congratulations to Stephanie, the winner of HelenKay's giveaway. Thank you to all who participated.
I love writing and reading romantic suspense.  There is something special about the combination of adrenaline-fueled action and rich emotion that I can’t resist.  You see it in action movies all the time.  I was watching one the other day, one that should have been all about explosions and villains, but still there was that emotional connection.  The movie?  Live Free Or Die Hard.  See, I told you it was an action movie.  Bruce Willis, his daughter and the always awesome Timothy Olyphant as the dastardly bad guy.  It is what some folks would call a pure boy movie, one that appeals to the 12 year-old boy action movie fan inside of me.
But there's something else there.  The connection between Willis' character and his daughter is strained at the beginning but the emotional connection drives the story along with the "save the world!" task.  Then there's the glimpse of a potential romance between the sidekick character – Justin Long – and Willis' daughter.  It's not a full-blown romance, but you can feel it.
In romantic suspense the emotional part of the story is, of course, clearer than in an action movie like Live Free Or Die Hard and for me it all begins with the "meet" – the first time we see the hero and heroine together on the page.  Sometimes they know each other.  Other times, the reader meets them as they met each other.  Either way, through all the gunfire and car chases and other fun suspense stuff,  that moment when they see each other has to stand out…even if the characters don't seem to like each other all that much.  And how fun is that?  I kind of like when the parties aren’t all that fond of each other yet somehow loves grows.  That's what happens in my newest release, When She Wasn't Looking. 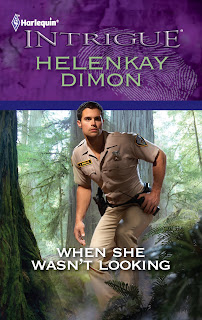 Here's a peek at that initial meet:
Jonas Porter yawned as he marched up the front porch steps to the craftsman-style bungalow in the middle of nowhere.  At ten in the morning he'd been on shift for more than sixteen straight hours thanks to the Webber kid taking his neighbor's car for a joyride that ended with a big splash into the Siuslaw River.
When he took the law enforcement position, Jonas had been promised relative peace and quiet by the county sheriff and Jonas' long-time mentor, Walt Roberts.  Since Jonas needed a break and crime didn't run rampant in Aberdeen, the small Oregon town where the river dumped into the Pacific Ocean, the job looked like the perfect solution. If a drunk pre-teen with a lack of common sense turned out to be the biggest problem, Jonas could live with that.
Agreeing to handle one small task on his way back to his place to pass out was probably not his brightest move.  He needed sleep, but this should easy.  In and out and then he could slip into bed for a few hours.
He knocked on the dark red door. The rock beat thumping inside and shaking the walls cut off. He double-checked the house number to make sure he was at the right place. He expected an older lady, a grandmother type.  He guessed this one liked her music loud, which blew his older-woman stereotype apart.
In the resulting silence he waited for someone to open up.  When no one did, he raised his hand to try again and nearly punched the woman who threw the door open.
"Sorry."  He mumbled as he stared into big brown eyes filled with a wariness that appeared older than the rest of her.
"Yes?" Her smile faded when her gaze traveled down his chest.
A guy could get a complex. "Ma'am, is this your house?"
"Of course."
The high cheekbones and slim figure didn't make any sense. Young and pretty with shoulder-length brown hair and not at all the lonely older woman he'd been told to check on.  This one couldn’t be more than in her mid-to-late twenties. She wore a slim long-sleeve red t-shirt, and if his guess was right, no bra.
He pretended not to notice the last part.  "I'm Lieutenant Jonas Porter, the deputy police chief."
"I got that much from the uniform and nametag."
"Uh, right. Sure."  She had him stuttering like the Webber kid.
"Why are you here?"  She wiped her hands on her olive cargo pants but didn’t shift one inch to let him in.
Young or old, she hardly struck him as a woman who needed police assistance to make sure she took her medicine on time. This one could handle her business without any help from him. The flat line of her mouth and clenched fists suggested she wanted to kick him right off the porch.


HelenKay will be giving away a copy of WHEN SHE WASN'T LOOKING to one lucky commenter!


Giveaway ends 10pm EST May 20th. Please supply your email in the post. You may use spaces or full text for security. (ex. jsmith at gmail dot com) If you do not wish to supply your email, or have trouble posting, please email justromanticsuspense @ gmail.com with a subject title of JRS GIVEAWAY to be entered in the current giveaway.
Posted by Maureen A. Miller at 3:59:00 AM