Denise Robbins
ABOUT PHISH NET STALKINGS
All she wanted was to find love. Was that too much to ask? How difficult could it be to find one man, the perfect man for her? 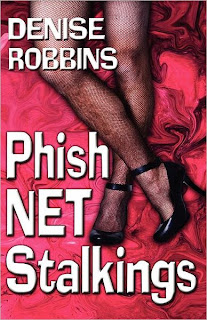 After dating the losers of the century, Jane decides there has to be a better way. She turns to an online dating service. After all, they guarantee a ‘happily ever after’ or your money back.


Ever since seeing her mother and granny Pearl murdered by men with badges, Jane has a fear of cops and anyone who carries a badge. Especially, because the killers are still on the loose and searching for her.


Former FBI Cybercrime special agent turned small-town Chief of Police, Cooper Chance, gets caught with his pants down and his family jewels tucked in pink ladies’ underwear with lacy frills when he meets the woman of his dreams. That’s not his only issue. The woman has a fear of cops. If he can get past her guard, maybe he can save her life.


Cooper went into his office, shut the door, and closed the blinds. “No way can I pull this off,” he protested holding up the leather skirt and heels. He stripped down to his skivvies and slid into the black leather skirt. “No way!” His damn boxers hung too low, below the skirt hem.


“Shit,” he growled and raked fingers through his hair. Just listen to him, he already sounded like a girl talking about hems.


“That’s why we included the ladies’ panties,” someone shouted back. Muffled chuckling rumbled behind his locked office door.


He riffled through the pile and found a pair of bright pink panties with ruffles and the tags still on them. “You’ve got to be kidding!”


The raucous laughter and low snickering that met his complaint burned his ass. What made him think that becoming the Chief of Police of a small town would be simple, easy? He must have been nuts. At least if he had been in a big city, like New York, Boston, or Minneapolis, he might not have felt so ridiculous. He would have fit in with any number of transgenders who walked the street. But here, in Manchester, New Hampshire he would stick out like a wolf in a pack of cats.


“Do women really wear this kind of underwear?”


“Panties,” one of the men shouted from the outer office.


“Panties,” he grumbled out the corner of his mouth. He held the silky material and eyed it with caution half expecting his men to supply him with a thong. Air wheezed out of his lungs when he saw that there was material on all sides and not some tiny strip that would ride up his ass. Just the thought of it made his shoulders shiver.


Before he lost his nerve, Cooper stripped off his cotton boxers and stuffed his beefy legs into the pink panties. When the underwear reached halfway up his thighs, he heard a popping noise. He glanced down and saw the elastic in the leg holes had ripped apart. “Not one size fits all, are they?”


Why not? Okay, kidding! I can think of nothing better to write than romantic suspense. It’s the perfect blend of my two favorite types of reads; romance and mystery. I love a good mystery by David Baldacci. I love a good romance by Linda Howard. If you mix those two together, holy cow! You’d have quite the combustible page-turner.
Romantic suspense mixes both romance and suspense. One genre should not significantly overwhelm the other. From the beginning of the story, the reader knows that your protagonists will fall in love and solve a mystery. And they will reach a happy ending of both plotlines.


Life is filled with romance so why write a story without an element of real life into the mix. It’s what helps keep the story grounded. Love and sex immediately ratchet up the tension between two characters.


Toss those two characters into the middle of a mystery and you have two characters that your readers want to follow and watch. If you do it right, the readers will be up until two in the morning reading, waiting to see what happens next, not wanting to put that book down.
Romantic suspense works best when the plotline for the romance is dependent on the mystery and vice versa. When the protagonists are forced to interact because of whatever mystery or suspense you have created for them it heightens the tension of both the romance and the suspense elements.
I’m a sucker for a happy ending!
Happy endings are a must in both romance and mystery. The happy ending in a romance is that the couple ends up together. In a mystery/suspense, the happy ending is that the villain is brought to justice. Both these endings have to leave the reader satisfied and happy.

High-tech becomes high-risk in Denise Robbins’ novels. The New Hampshire based author uses two decades of experience in computers to explore the killer possibilities in technology. Denise integrates her knowledge of computers and technology along with secrets, intrigue, suspense, and even a little romance into all of her techno-romantic thriller novels. Readers and reviewers agree Denise writes stories that will keep you at the edge of your seat and clamoring for more.
Her latest book is Phish NET Stalkings.
You can visit her website at http://www.deniserobbins.com.
Website | Blog | Twitter | Facebook | Amazon | Amazon Kindle | Official Tour Page 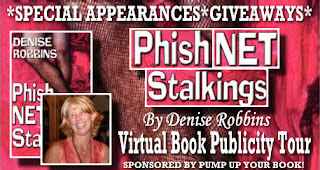