Congratulations to "Maureen" the winner of Stacey's giveaway. Thank you to everyone who participated.

Yesterday I told you why I like romantic suspense (RS) and today I’m going to tell you where the idea for LOST IN ITALY came from by sharing the acknowledgments page at the front of the book. Here’s the blurb: 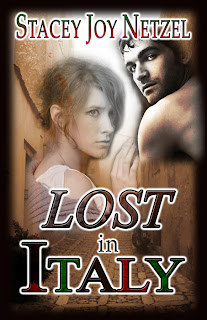 Halli Sanders spent two years planning the trip of a lifetime to Italy. Her itinerary did not include being stranded by her siblings, kidnapped by a sexy American movie star, dodging bullets, or fleeing criminals in a car chase around Lake Como. And that’s just in the first three hours.

Trent Tomlin put his movie career on hold to investigate his brother’s murder-ruled-suicide at his Italian villa. He’s closing in on the suspects when an American tourist unwittingly films the murder of the retired cop helping him. The killers will stop at nothing to get the evidence—including holding Halli’s family as collateral.

Thrust into the role of real-life hero, Trent finds himself falling for the Plain Jane whose beauty blossoms with every challenge they face. But how can he keep the evidence from falling into the wrong hands and get justice for his brother and friend without betraying Halli and her family?

First, a note to my readers...

My editor returned this manuscript to me with the words, “Great job, but the brother and sister ‘accidentally’ leaving the heroine behind seems a bit unrealistic and contrived for the benefit of your plot.”

My reply? “I’m Halli...minus the movie star and the kidnapping.” (and the murder)

Yes, to me, being left behind in Italy is (and was) very realistic. Especially since it took my siblings ten minutes to even realize I wasn’t in the car with them.

Second, I’d like to clarify that Ben and Rachel were only inspired by my siblings, and are not mirror images of my real family. My oldest sister is a red-head, and these days she could handle a vacation without her blow dryer. I think. Thankfully, though, we do share a great friendship just like Halli and Rachel. (so no holding the above comment against me!) And my brother... although he owns a motorcycle like Ben, in real life he speaks fluent Italian. I’d like to tell you he’s as hot as Ben, but he’s my little brother so that’d just be weird. Besides, Ben is a fictional secondary character and Trent is the real star of this book, so lets move on. 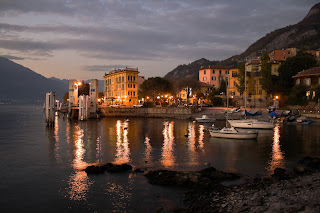 Special thanks to my son Cody for the boat idea and the many brainstorming sessions as we drove up north. To my brother Troy for his patient help with all my Italian related questions and for loving the book on the first read through even with all the emotional, romance stuff. And to both my siblings, Bridgette and Troy, for leaving me all alone beside Lake Como, Italy back in 1997. I got a whole book out of those twenty minutes.

Thanks to Donna, Jamie, and Dulcie for the writer’s weekends that helped shape the plot. And last, but not least, I’d also like to thank my great editor Stacy D. Holmes, who challenged me to make this book the best it could be.

So there you have it—my brother and sister drove off and left me on the side of the road and took what felt like forever to come back for me. Now, if you’re interested in the movie star and kidnapping stuff I made up afterward, I highly recommend you read the book. The excerpt of when Halli and Trent first meet is up on Amazon, so I’m going to share a different section of the book with you now.

EXCERPT (This is after the kidnapping, shooting and car chase around the lake)

“So what if I like a little order in my life?” she muttered defensively.

He smiled, but his expression quickly sobered. “Listen, I understand it’s been one hell of a day for you. Despite what you may think, this is far from normal for me, too. But like it or not, you stepped into something very serious. After everything that’s happened today, these guys won’t care what you’ve actually got on that video anymore. They’ll kill first, and watch it later. I—”

“Thank you, because I needed that reminder. This Alrigo guy wants me dead and I don’t even know who he is!” She spun away from Trent, tears stinging her eyes from his dire prediction. “I can’t believe I came to Italy and got mixed up with the mafia.”

A moment later his hands slid onto her shoulders, sending her into the air about three inches.

His fingers tightened before rubbing her tense muscles. “They’re not mafia.”

“Then who are they?” Tingles radiated along her shoulders from his gentle massage.

“The less you know, the better. It’s safer that way.”

She rolled her eyes even though her back was to him. “How do you know?”

Suddenly, she felt like she’d been smacked upside the head and twisted away from his hands to face him. She narrowed her gaze. “How do you know? About the video, what I filmed, who these guys are? What were you doing there?”

He didn’t want to tell her, she could see it in his face. She crossed her arms and waited, trying to ignore a growing dread turning her blood colder by the second. Why hadn’t she asked these questions earlier?

He ran a hand through his hair, down the back of his head to rub his neck.

She forced the next question into the silence. “Are you working with them?”

“No.” His gaze shifted toward the living room.

Suspicion mushroomed and Halli swallowed hard. “That was a quick denial.”

She watched an inner debate play out in his expression as he stared past her shoulder. Pain shadowed his eyes and drew the corners of his mouth down. Just when she thought he’d explain what was going on, he lifted his arm to look at his watch.

“I’ve got to get that battery before the shops close for the night.”

What was it he didn’t want her to know? Her mind raced. He had to be involved; how else would he know about everything?

Trent grabbed his keys and the camera from the counter and headed toward the door. “I’ll be back in a little while.”

Her stomach knotted, shoving aside suspicion. Despite what she’d just been thinking, the thought of being by herself was scarier than any conspiracy she could dream up right now.

She rushed after him. “You’re not leaving me here.”

Trent paused, his attention focused on the sudden death grip she had on his arm. “I can’t take you with me, what if we run into more cops? One of them might recognize you.”

“I’ll duck down in my seat.” She fought a lump of fear rising in her throat. “Please, Trent, don’t leave me alone.”

He rested both hands on her shoulders, his gaze locked with hers. “No one knows of my part in any of this. You’re safe here.”

A 2012 finalist in the RS category of Wisconsin Romance Writer’s Write Touch Readers’ Award, LOST IN ITALY is currently available at Amazon. After June 1st it will be available at additional distributors for all other formats and ereaders, including Nook, Apple, Sony, Smashwords, Kobo, ect.

Thank you for visiting, and don’t forget to leave a comment for your chance to win an ebook or print* copy of LOST IN ITALY. (print available for shipping to US or Canada only)

All you have to do is answer the question: Why do YOU like romantic suspense?

Stacey Joy Netzel fell in love with books at a young age, so for her the graduation to writing them was natural. An avid reader and fan of movies with happy endings, she lives in her native Wisconsin with her husband and three children, a couple horses and some barn cats. She works part-time as a travel agent, and in her limited free time enjoys gardening, canning, and visiting her parents in Northeastern Wisconsin (Up North) at their cabin on the lake. Her newest release is the contemporary romance, More Than a Kiss, but for romantic suspense you can check out Lost In Italy, and her Colorado Trust Series, Trust in the Lawe, Shattered Trust, and Shadowed Trust. Other titles include Ditched Again, Welcome to Redemption Series (books 2,4,6), Chasin’ Mason, Dragonfly Dreams, If Tombstones Could Talk, and her Christmas anthology, Mistletoe Rules, which took 1st place in WisRWA's 2010 Write Touch Readers' Award.

Giveaway ends 9pm EST May 7th. Please supply your email in the post. You may use spaces or full text for security. (ex. jsmith at gmail dot com) If you do not wish to supply your email, or have trouble posting, please email justromanticsuspense @ gmail.com with a subject title of JRS GIVEAWAY to be entered in the current giveaway.