By: Terry Odell
Congratulations to Stacy G. and Amy R., the winners of Terry's giveaway. Thank you to all who participated!
Two bits of good news! This week, ROOTED IN DANGER, another book in my Blackthorne, Inc. covert ops series, hits the shelves—the library shelves. The publisher targets that market, so it's a tough book to get from the bookstore. The publisher also doesn't hold the digital rights to the books it publishes, but authors must wait a year to exercise them. And … drum roll … that year is up for WHERE DANGER HIDES, the second book in the series. Look for it in the e-book stores by the end of the month. 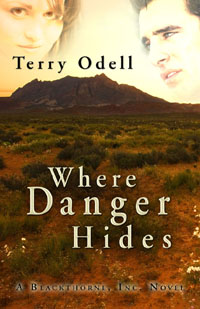 But my Blackthorne, Inc. books aren't really a series. I've written them so they can be read out of order without spoilers for previous books. Although they're connected by the cast of characters, each book has its own hero and heroine.  When I wrote the first book, WHEN DANGER CALLS, which "starred" Ryan Harper, another character, Dalton, showed up. By the time I finished that book, Dalton wanted his story told.
Trouble was, I didn't really know him. In the first book, he didn't even have a first name. But discovering his story was part of the writing process, and to me, that's most of the fun of writing. Find out what your characters fear, and then shove it down their throats. But you don't simply tell the reader that Character A is afraid of heights. It's about showing. Revealing things in small dribbles. How they came about their fears is something to save for much later in the book.
For example, in WHERE DANGER HIDES, I discovered that Dalton goes off the deep end when confronted with a baby. So what did Evil Author do? What do you think? Miri, the heroine, has virtually kidnapped him in this scene, bringing him to a house in the suburbs. He has no idea what's going on, but he follows her inside. And then what happens? Here's a peek.
He followed Miri into a small laundry room, where she hung her parka on a hook. She handed him a yellow paper gown. "Put it on," she said, slipping into one of her own. "Ties in the back." At the sink, she turned on the water and squirted some soap from a dispenser. "Wash."
Miri was clearly the commanding officer on this op. But he had a bad feeling about this—a really bad feeling. Sickrooms and hospitals gave him the willies. Who had they come to see?
When Miri led him down the hall and he heard a baby crying—no, make that babies, plural—he was ready to jump ship.
"Miri—"
"Shh. Keep your voice down. Sudden noises upset them."
As if crying babies didn't upset him?
"Go. Sit." She pointed to one of three rocking chairs in a room with five cribs and other bits he recognized as nursery furniture. Elsie fussed over one of the cribs, then brought out a squirming, squalling blanket.
His heart went into triple time forced march rate. Blood rushed in his ears. Before his knees went to full Jell-O mode, he sank into the nearest chair. 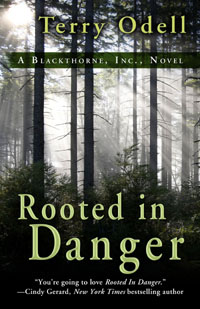 ROOTED IN DANGER features Foster (Fozzie) Mayhew. All I knew about him when I started his story was that he was a cocky, arrogant Aussie, and the Intel Specialist on the Team. With his surveillance equipment, he can spot the fleas on a squirrel's balls from his helo five hundred feet in the air. But I learned that he's claustrophobic. Putting him in an elevator was such fun. Here, Fozzie and Torie have just arrived at a hotel where they're going to be hiding out.
He took the keys in one hand, balanced the carton on his hip with the other, and strolled toward the elevator. He looked at the envelope with the room number. Fourteen forty-two.
"We've been cooped up in the car a lot lately. And this elevator seems to be taking its sweet time. How about walking up?"
She looked at him in disbelief. "The stairs? It's fourteen flights. I don't think so."
The elevator dinged. The doors opened. Torie stepped in. He took a step to follow. It was as if a force field hung across the entrance to the car. He swallowed.
It's an elevator. You ride in elevators. Fourteen floors. A minute, minute-an- a-half, tops.
His feet didn't move. He made a show of adjusting the book box.
"Well? You coming?" she asked over her shoulder.
To celebrate the release of ROOTED IN DANGER, and the e-release of WHERE DANGER HIDES, I'll give away an autographed copy (hard cover) of ROOTED IN DANGER to one commenter. And, for a slightly more patient commenter, I'll give away a download of WHERE DANGER HIDES once it hits the e-store shelves. Hard cover is US residents only, please. Let me know your choice in the comments.
And if you'd like to read either of these books for free, ask for them at your local library. That keeps my publisher happy.
Giveaway ends 10pm EST May 15th. Please supply your email in the post. You may use spaces or full text for security. (ex. jsmith at gmail dot com) If you do not wish to supply your email, or have trouble posting, please email justromanticsuspense @ gmail.com with a subject title of JRS GIVEAWAY to be entered in the current giveaway.
Posted by Maureen A. Miller at 4:14:00 AM