By: Autumn Jordon
Congratulations to Judi L., the winner of Autumn's giveaway. Thank you to all who participated!
I love reading romantic suspense and if you’re reading this, it’s a given you do too.  Awesome! We’re kindred spirits.
Want to know why I love writing romantic suspense?  Yes, because I love to read the genre, silly, but seriously, I love writing romantic suspense because of the research.  When an idea comes to me, I can’t wait to start to digging into a topic and finding the most intriguing facts. Sometimes data or comments by industry professionals lead me to other fascinating subjects.  At times, the story idea I started out to write about is left by the wayside because my research has uncovered a more interesting subject. (Imagine a wicked laugh and me wringing my hands together here —BAWAWA)
In my new release, HIS WITNESS TO EVIL, (available at Amazon & B&N btw) the idea came from an occurrence at my work.  I worked as a corp. secretary, who wore many hats, for a mid-size trucking company.  No. The company name remains undisclosed for obvious reasons.  I knew tractor-trailers were heisted. I had to deal with the law enforcement officers in a few states and insurance companies.  I also knew the U.S. treasury transported U.S. currency by tractor-trailers, well because…  Not saying more. I started to think what if units carrying currency were targeted. Hmmm  I my muse took over.
Now, since I worked within the transportation industry, the research for that facet of the book was at my fingertips.  But when I thought about who would be targeting the tractor-trailers and how they would know which of the many vehicles to heist, I started researching the U.S. Treasury, organized crime and law enforcement jurisdictions.  From my research came an idea, but of course I had to check the scenario out to see if it was plausible.  Enter the FBI.  I interviewed a director of the agency and learned not only was my idea plausible but had indeed, in part, occurred. BINGO!
You really want to know what the FBI confirmed, don’t you?  Well you’ll have read His Witness To Evil.   It’s available on Amazon.
Mr. FBI man really was nice and was kind enough to share some of his personal and family life with me.  I think talking to him, helped me develop a great heroin John Dolton.  In fact, a reviewer for RT stated:  John Dolton is the best character; his background and the sorrow he lives with make a good subplot. Readers will wish they were the ones offering him a shoulder to cry on.
You can see why I love research.  One note before I share an excerpt of  HIS WITNESS TO EVIL. The wide-world web has made it so easy to find answers to almost anything. I’ll caution you however, to double check your research findings with several different sources, because, as you know, you can’t believe everything you read on the net.
Now,  HIS WITNESS TO EVIL by Autumn Jordon 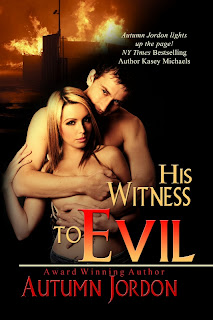 Suddenly, a hand slapped across her mouth and a strong arm circled her waist, lifting her off her feet. Her nostrils flared against the ridge of skin as she fought to suck in air and the scent of the man dragging her away.


A car whizzed by but didn’t stop. The street ahead was deserted except for two elderly women waiting for a bus and a couple standing on the corner. They had their backs to her.


They didn’t see her.


She searched wildly for anyone who would come to her rescue. There was no one.


The street disappeared and red brick imprisoned her and her attacker on both sides as the man carried her deeper into the deserted alley. Foul smelling dumpsters, broken crates and cardboard boxes limp from the downpour on Saturday night filled the alley.


While her toes fought to touch the ground, her fingernails dug into tan skin. She struggled helplessly to free herself.


“Owww. Will you stop clawing me?” The deep tone heated her ear.


“John,” she mumbled against his hand. She twisted and strained to look back. Relief washed through her.


“Quiet.” He deposited her into a deep doorway.


Her purse slipped from her shoulder and dropped to the ground as she spun on her heel. Without thought, she flung her arms around his neck. His hard chest crushed her breasts. “I was so scared. I didn’t want to leave you and Zohara. I’m so glad you’re alive.”


“Me too,” he whispered into her ear.


She pulled back. His smile was faint, but it was there. Her hands trailed down his arms and found the bandage. “Your arm.”


“You did the right thing, Steph. Where are the kids?”


He looked at her warily, probably wondering where she could hide them and feel safe about doing so.


She squared her shoulders. “No one saw us. I wasn’t going to bring them until I knew it was safe. Whoever is looking for us could spot us faster if we were together, so I left them at the library with Susan. No one will look for them there. And if something happens to me…” Stephanie swallowed hard, fear rippling through her. “Well, Susan knows my mother. She’d call her.”


At the sound of a door opening, John glanced around the doorway’s edge. He pushed her into the corner, shielding her with his body.


With her nose pressed against his chest, she drew in a mixture of his musk scent and blood.
The sound of someone throwing trash into the dumpster mingled with the throb of her heart. Protected by John, she closed her eyes and waited.


Stephanie’s head snapped up. “What do you mean, damn?”


“Shh.” John’s hands found her hips and pulled her even closer—hip to hip. The butt of his gun poked her ribs. No protective vests shielded her from the feel of him.


His burning gaze told her of his plan only a moment before his lips, full and hot, crushed hers.
His hands trailed down her backside, lifting her against his hard body. She ran her hands up his strong arms. The world reeled away, leaving her and John alone, enjoying the warm comfort of each other as their bodies molded together.


“Hey! Hey, buddy. What are you doing there?” A man called from a short distance.


John pulled back. Instantly the air between them cooled and Stephanie shivered, wanting more of him.


Dazed, her gaze locked with his. She knew what he wanted from her.


“Miss?” The stocky man wearing a bloody butcher’s apron glanced at her purse before his hard glare landed on John. The man’s burly arms hosted clamped fists and his stance changed. He was ready to pounce on John at her word.


“Leave us alone. We’ve only got ten minutes.” Stephanie slowly laced her arms around John’s neck and flashed a wicked smile at the man. She went up on her toes and buried her face in John’s neck and nibbled away, enjoying the salty taste of him. 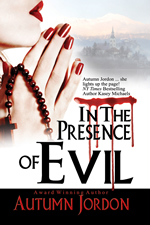 Autumn will be offering an e-copy of IN THE PRESENCE OF EVIL to one lucky commenter!


Giveaway ends 10pm EST May 27th. Please supply your email in the post. You may use spaces or full text for security. (ex. jsmith at gmail dot com) If you do not wish to supply your email, or have trouble posting, please email maureen@justromanticsuspense.com with a subject title of JRS GIVEAWAY to be entered in the current giveaway.
Posted by Maureen A. Miller at 4:22:00 AM