By: Cynthia Justlin
Congratulations to Whitney, the winner of Cynthia's giveaway. Thank you to all who participated. 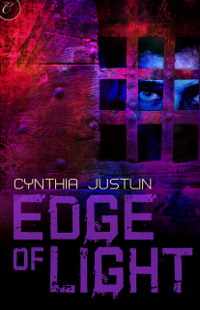 One of the coolest parts of writing romantic suspense is getting the opportunity to explore dastardly villains. I love creating bad guys that are both ruthless and human, finding that one redeeming trait that I can exploit to add layer and depth to their madness. When I first started writing EDGE OF LIGHT, I immediately realized I had a problem. Because I didn't just have one villain. I had three. And each villain needed his own point of view.


I questioned my sanity trying to juggle three villains, one secondary character AND the hero and heroine. I worried that maybe readers wouldn't want to spend that much time getting into my villains' heads. And maybe they won't...guess I'll soon find out! But, the more I wrote, the more I realized the importance of the dynamic between these three men. Jude, The Father, is the unequivocal leader. Chann, The Son, is the false missionary among the Cambodian tribes, and Leo, The Unholy Ghost, is the ruthless albino forced into doing the “dirty” work. Together, they make up The Trinity, three men united under a common goal—total anarchy.


I loved being able to show how their motivations changed over time. Their downfall doesn't only come because Jocelyn and Oliver are fighting for their freedom, it also comes from within. Getting into each of their heads allowed me to really delve into the friction that destroys them and make use of the symbolism surrounding The Trinity.


So, as I'm plotting my next romantic suspense and getting into the villain frame of mind, who are some of your favorite villains? They can be from books, movies, TV, whatever. Do they have any redeeming qualities? Everyone who leaves me a comment will be entered to win a digital copy of EDGE OF LIGHT.


Also, stop by my website and enter my special giveaway to win Oliver's journal, Cambodian money pendants and more. (http://www.cynthiajustlin.com/2012/05/14/edge-of-light-giveaway)


Blurb:
Taken prisoner by a ruthless group of anarchists deep in the Cambodian jungle, anthropologist Jocelyn Hewitt is isolated in a dark prison cell. Without chance of rescue. Or hope. Until the man in the next cell reaches out to let her know she’s not as alone as she thinks.


CIA agent Oliver Shaw has been held prisoner for over two years. Forced to witness the brutal torture and slow murder of his entire team, his spirit is not just broken, it’s crushed. He no longer believes in hope. Until he hears Jocelyn through the wall, and suddenly feels like a glimpse of light is trying to reach in…


Jocelyn’s heart aches for the tortured man whose presence and voice give her the courage to risk their escape. But first she’ll have to remind Oliver who he once was, what he once loved, and bring him back to life. Only then will they have a chance for freedom—and the kind of love neither ever thought possible.


ABOUT CYNTHIA:
Cynthia is a former Romance Writers of America Golden Heart® Finalist in Romantic Suspense. She started out writing contemporary romance, but when all her plots began to turn dastardly, she decided to stop fighting the urge to throw explosions, dead bodies, and evil villains into her books.


With her B.S. in the chemical sciences and her love of the periodic table (yes, she’s a geek and proud of it!) she finally found the perfect potent mix of love and danger to put into her stories.


Cynthia will be awarding one lucky commenter a digital copy of EDGE OF LIGHT.


Giveaway ends 10pm EST May 17th. Please supply your email in the post. You may use spaces or full text for security. (ex. jsmith at gmail dot com) If you do not wish to supply your email, or have trouble posting, please email justromanticsuspense @ gmail.com with a subject title of JRS GIVEAWAY to be entered in the current giveaway.