What Compels You To Read Romantic Suspense?

By: Tori Scott
Congratulations to 'Cris', the winner of Tori's giveaway! Thank you to all who participated.
What compels you to read romantic suspense? For me, it's the high stakes involved. I started reading Nancy Drew when I was eight and read every single book as soon as it came out. Then it was Cherry Ames, Army Nurse. I graduated to Sandra Brown, Iris Johansen, Jude Deveraux, and Harlequin Intrigues. In between, while waiting for new releases, I read hundreds of straight romances, but I was always drawn back to romantic suspense.
While I enjoy straight romance, there's just something about adding in that element of danger that ups the stakes for the hero and heroine, that makes the book less predictable, and in the hands of a master like Nora Roberts, Allison Brennan, Lisa Gardner, or Lisa Jackson, a genuine thrill ride. It keeps me turning pages late into the night and into the wee hours of the morning.
When I first started writing, I wrote straight romance. But then suspense elements started to sneak into my books. I couldn't call them romantic suspense yet, but there was intrigue of some kind. Finally, I started writing Lone Star Justice, my first true romantic suspense, and I found I loved writing it. I loved putting the heroine into situations that forced her to use her wits and to be an active part of solving the crime. I didn't want her to sit on the sidelines wringing her hands, waiting for the hero to save her. 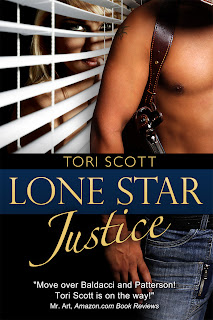 Lone Star Justice by Tori Scott
A home-grown killer blows a small town's secrets wide
open...
Judge Madelyn Cooper never shows signs of weakness, but when a killer threatens her daughter's life, Maddie does what any mother would do. She runs to the one place where her daughter will be safe. That place is her home town of Greendale, Texas, where everyone knows their neighbors. But do they, really?
Rand McCade is determined to keep Greendale safe. As
Sheriff, he promised there would be no repeats of the horrible day when his parents were murdered. Now Maddie is back, bringing trouble with her once again. And this time, she has a daughter. His daughter.
As a psychopath sets his sights on Maddie, Rand and Maddie must figure out who is after her, and why, before someone else ends up dead.
Excerpt:
All was eerily quiet and still, and Maddie tried to shake off the foreboding that stole over her.
You're being silly. Nothing is wrong. Anne just forgot her court date or something. She wouldn't have left town without letting you know where she was going, no matter how scared she was.
The house looked empty. Anne's car wasn't in the driveway, but she might have parked it in the garage if she was spooked. Maddie grabbed a flashlight from the glove box and stepped out of the car, slamming the door hard enough to announce her presence. No one came outside to see who had come to visit. No one peeked through the curtains. No dogs barked a warning.
She stepped onto the wide front porch and cupped her hands around her eyes, trying in vain to see through the sheer curtains covering the bay window. There was no sound of a television or radio, no footsteps echoing from within the house. No sign of life.
Maddie opened the screen and knocked on the door, hard enough to bruise her knuckles. She waited, and waited. No one answered. She knocked again, then a third time. Feeling like a too-stupid-to-live character in a B movie, she tried the doorknob--and breathed a sigh of relief when she discovered it was locked.
So that was that. Anne wasn't home. All she could do was wait until she called again.
As Maddie rounded the front of her vehicle, she glanced toward the backyard. A flash of white in the trees drew her closer. She really didn't want to go back there. But what if Anne was in trouble? She couldn't just walk away and leave her friend.
At least call for backup. Oh, great. She definitely needed to lay off the cop shows. Her imagination had always been her downfall. Maybe she should have been a novelist instead of a judge. She wasn't planning to chase any bad guys down the street. All she needed to do was make sure the back yard was empty, that the flash of white was nothing more than a grocery bag caught on a branch, and then she'd head straight home and call everyone she knew who might know where Anne had gone. If that didn't bring any results, she'd call the police and turn in a missing persons report.
Shining the light into the trees, she saw what looked like a dress hung out to dry.
That made no sense. Anne wouldn't hang her dress in the trees. Maddie wished she'd called the cops before coming back here alone, but what would she tell them anyway? She had to deal with them every day, and she didn't want them to think she was weak or scared. But right now she'd give almost anything to have one of them at her side.
She took a deep breath and opened the gate, stepping into the dimly lit yard. She used the flashlight to make sure no one was hiding nearby, then moved closer to the trees.
What she saw stopped her in her tracks. Then she lost her lunch all over her brand new Gucci sandals.
Do you remember the first romantic suspense you read? Or the one that got you hooked on the genre? Comment below and tell us how you got hooked on romantic suspense. I'll give away a digital copy of Lone Star Justice to one lucky commenter.
Thanks for reading!
Tori Scott


Giveaway ends 10pm EST April 8th. Please supply your email in the post. You may use spaces or full text for security. (ex. jsmith at gmail dot com) If you do not wish to supply your email, or have trouble posting, please email justromanticsuspense @ gmail.com with a subject title of JRS GIVEAWAY to be entered in the current giveaway.
Posted by Maureen A. Miller at 4:12:00 AM