Romantic Suspense Series: For When You Can’t Let Go

By: Elle Kennedy
Congratulations to Marijane D., the winner of Elle's giveaway. Thank you to all who participated!
I’m one of those readers who simply cannot let go.  If I fall in love with a character, I want to see them again.  Or at least hear what they’re up to from other characters.  This is why I’m so drawn to romantic suspense books that belong to a series.
Single titles are great, but sometimes I feel like they work better for straight-up mysteries and thrillers, where the romance might not be as prominent (or is non-existent).  There’s a case or threat, the characters solve said case or remove said threat, and then the story is over.  When a book is more plot-driven, I’m not as invested in the characters, and therefore, I can easily say goodbye to them when the story ends.
But if I’m reading something that’s character-driven?  God help that author because I will be DEMANDING more.  I am obsessed with authors whose books have recurring characters, like Iris Johansen, Cindy Gerard and Allison Brennan to name a few.  Whether it’s a group of sexy heroes who belong to the same black ops unit, or characters who work for a PI company, or whatever the premise, I love when an author includes strong secondary characters who later serve as the heroes and heroines for future books. 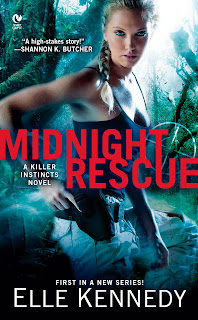 My newest series, KILLER INSTINCTS, definitely has that core group of characters.  Not only is there a group of hot male mercenaries, but there’s also a team of female assassins who are just as strong as their counterparts.  Kane and Abby are the hero and heroine of MIDNIGHT RESCUE, but the characters you’ll meet—Luke, Trevor, Isabel, D, Noelle, etc—will make appearances in the second and third books of the series.  It was really fun creating this cast of characters, and I hope that readers welcome them into their hearts, the way I have!
So tell me, do you prefer series books or one-shot single titles?  Anyone who comes by and comments today will be entered in a draw to win a copy of MIDNIGHT RESCUE.
Also, be sure to stop by my website www.ellekennedy.com, “like” me on Facebook  or follow me on Twitter (@ElleKennedy).  I love chatting with fellow readers and writers, so don’t be a stranger :)
Giveaway ends 10pm EST April 29th. Please supply your email in the post. You may use spaces or full text for security. (ex. jsmith at gmail dot com) If you do not wish to supply your email, or have trouble posting, please email justromanticsuspense @ gmail.com with a subject title of JRS GIVEAWAY to be entered in the current giveaway.

And she’s the good guy.

Abby Sinclair had a desperate childhood until she was rescued and adopted by a retired army ranger who molded her into a master of self-defense. Now, she’s a cunning and fearless assassin thrust into assignment after dangerous assignment, using everything she has—nerve, resilience, strength, sex—to come out on top. Her only rule: never trust anyone.

Abby’s latest assignment is in Columbia: go undercover and snuff out a dangerous arms dealer active in the underground sex trade. But when Abby purposely blows her cover in a last-ditch attempt to free the helpless victims, deadly mercenary Kane Woodland is recruited as back-up. His mission: get Abby out of that hell hole.

The last thing Kane expects is to feel primal attraction for Abby. But when she convinces him to join her on her perilous mission, their newfound passion could put the lives of their whole team at risk.
Posted by Maureen A. Miller at 4:47:00 AM