My Fascination with Crime Stories

By: Alison Stone
Congratulations to Julie, the winner of Alison's giveaway! Thank you to all who participated.
From the time I was a little girl, certain crime stories have captured my imagination. It seems to be the stories where the victim wasn’t doing anything out of the ordinary. They were just going about their day, like every other day, when tragedy struck.
In the early 80s, I wasn’t yet a teen when an eight-year-old girl was murdered in a nearby suburb a few weeks before Christmas. Murders rarely happened there. Even today, a murder in this suburb is huge news. Anyway, I remember specific details. A neighbor was interviewed on the news saying she recalled the girl, “just the day before” singing Frosty the Snowman while building a snowman in her front yard. Immediately I conjured up an image of the young girl. She could have been anybody. She could have been me. And unfortunately, the lure of playing outside in the snow probably sealed her fate. Turns out someone had seen the quiet teenage boy who lived down the street pulling a red sled with a box on it. The sweet little girl’s body was in that box. He used the sled to dispose of her body in a nearby creek. The image still evokes powerful emotions.
More recently, a mother of four went out for a jog. The first sign anything was amiss was when she didn’t show up at her four-year-old’s pre-school to pick him up. Her image was plastered all over the evening news. Tragically, two days later she was found murdered on a bike path that wandered through affluent neighborhoods. The subsequent investigation into her murder lead to the capture of the man called “The Bike Path Rapist” who had been terrorizing the suburbs of Buffalo, New York for over two decades.  This was an unimaginable tragedy for her husband and young children. I couldn’t get certain thoughts out of my head. Had this dear woman thrown a load of laundry in, ran a few errands, then decided to go for a run? What were the chances this woman’s path crossed exactly with the murderer’s on the bike path on that day at that moment? What if one thing had been altered that day? It surely would have changed the course of her fate.
I think the reason I am so fascinated—maybe haunted is a better word— is because I  personalize the victim. Their life ended in tragedy, but that’s not what defined them. They were loved by many and had hopes and dreams—and families. They didn’t go looking for trouble. They were just out living their lives…building a snowman, exercising. Their fate could have been anyone’s in the wrong place at the wrong time. My heart goes out to them.
So, it comes as no surprise that my fascination with crime has led to my becoming a writer of romantic suspense. I read a story in the newspaper a few years ago that inspired my debut novel, Random Acts. The police in a small town, pulled over a young college student who had unpaid traffic tickets. When they learned this, they coerced her into signing an agreement to be a drug informant in exchange for leniency. The young woman had never used drugs. She had unpaid traffic tickets! The girl’s father was a lawyer and raised a red flag to both the town and the local newspaper. The Village Board refused to change the policy. (Not sure where it stands today.) But it got me thinking. I started researching and learned many other cities have the same policy and unfortunately, young people who had been forced to be drug informants because of minor charges (sometimes completely unrelated to drugs) have lost their lives. A few high-profile cases have resulted in changes to the laws in some towns. (Google: Florida Rachel’s Law.)
From there, the idea of Random Acts was born. Here’s the blurb: 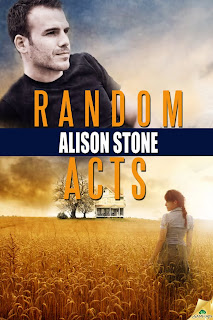 Second chances can have a terrible sense of timing.
As a child, watching her mother always pick the wrong man left Danielle Carson wary of opening her heart to anyone—except Patrick Kingsley. But circumstances came between them and left Danielle with a broken heart. Now she buries the pain of what might have been by channeling all her energy into her career. When a family crisis brings her back to her hometown, she is forced to face the past—and the disturbing fact that her sister’s car accident was staged to mask a brutal beating.
A police officer and widower, Patrick guards his heart as fiercely as he guards his beloved daughter. Seeing Danielle again unexpectedly reignites their old flame, but no way will he introduce a woman into his daughter’s life. Certainly not one whose values on faith and family are so different from his own.
Despite their best intentions, they are drawn together—until Danielle learns Patrick had a hand in putting her sister in harm’s way. Her fragile trust is crushed, but Patrick is the only man who can help her stop the villain before everything they both love is destroyed. Faith, family…and their second chance at forever.
Read an excerpt:
Random Acts available at:
SamhainPublishing:
Amazon:
Barnes & Noble:
Check out Alison Stone on her website (AlisonStone.com), her blog (alisonstone.wordpress.com), Twitter (@Alison_Stone) and on Facebook. She loves to connect with readers.
Have you ever been haunted by a news story? Be sure to make a comment. Be sure to stop by tomorrow and read about how Alison’s fascination with crime stories affects her day-to-day life. One lucky commenter from today or tomorrow will win their choice of a $10 gift card from Barnes and Noble or Amazon.
Giveaway ends 9pm EST April 22nd. Please supply your email in the post. You may use spaces or full text for security. (ex. jsmith at gmail dot com) If you do not wish to supply your email, or have trouble posting, please email justromanticsuspense @ gmail.com with a subject title of JRS GIVEAWAY to be entered in the current giveaway.
Posted by Maureen A. Miller at 5:01:00 AM