By: Tiffany A. Snow
Congratulations to "Erin", the winner of Tiffany's giveaway. Thank you to all who participated.
Thank you to Just Romantic Suspense for hosting me today!
I really enjoy writing in the first-person.  However, as a reader of first-person, it can sometimes be frustrating to not know what other characters are thinking or feeling.  In TURN TO ME, the second book in my Kathleen Turner Series, I write a prologue and epilogue that are each in the third person – one from each of the heroes’ perspectives – as a bit of a “present” to my readers.  Those chapters seem to have gone over very well, so I got the idea that it might be fun to fill in a “missing” scene from third-person point-of-view.  I put a poll up on my website with four choices of scenes readers would like to read, and this scene was the #1 vote-getter.  I hope you enjoy it.
Both books, NO TURNING BACK and TURN TO ME are only $2.99 on Amazon.  In addition, TURN TO ME is available on BarnesandNoble.com for Nook – also for $2.99. 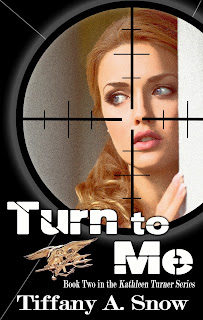 I’m giving away an ebook copy of TURN TO ME today – reader’s choice on which version they prefer – or a print copy, if that’s the winner’s preference (continental US only for that one, please).
By Request – Most Wanted “Deleted” Scene
In TURN TO ME (book two in the “Kathleen Turner Series”), Kathleen calls Blane when she throws Kade out, but Blane doesn’t pick up and she has to leave a voice mail.
Blane usually answers his cell, but wasn’t able to in this instance.
This is why.
(Warning-this scene may contain adult language.)
~~~~~~~~~~~~~~~~~~~~~~~


Giveaway ends 9pm EST May 1st. Please supply your email in the post. You may use spaces or full text for security. (ex. jsmith at gmail dot com) If you do not wish to supply your email, or have trouble posting, please email justromanticsuspense @ gmail.com with a subject title of JRS GIVEAWAY to be entered in the current giveaway.
Posted by Maureen A. Miller at 5:02:00 AM

Email ThisBlogThis!Share to TwitterShare to FacebookShare to Pinterest
Labels: Tiffany A. Snow