By: Toni Anderson
Congratulations to "Ellen B", the winner of Toni's giveaway. Thank you to all who participated.
I spend a lot of time thinking about heroes. Not just those fictional characters who inhabit our Romantic Suspense stories, but real heroes. Soldiers, cops, paramedics, firefighters, grandmothers who raise the alarm when a fire starts in their home. People who run homeless shelters, nurses, doctors, vets. People who dive into rivers to save strangers, or dogs. People who offer to change your tire on the side of the road. People who rescue abused and abandoned animals.


The world is full of people who are true heroes.


So what important characteristics from these real life heroes do we need to recreate in fiction?


It goes beyond muscles and good looks (although they certainly help for the more energetic and romantic parts of the story J). I think the foremost trait of true heroes is the desire to see other people safe (or their animals J). They need to be prepared to put themselves in harm’s way to save others.


I think that’s why I fell so hard in love with my last hero, Daniel Fox. In the early part of the story he does some stuff that some people might construe as less than heroic. But to me, the fact he would risk everything he holds dear for a women he doesn’t even like is the first clue to his heroic tendencies. By the end of the story, Daniel Fox is willing to give up everything, including his freedom, and his life, to save the woman he loves.


So what do you think makes someone heroic?
Toni is giving away an ebook copy of Edge of Survival to one lucky commenter. 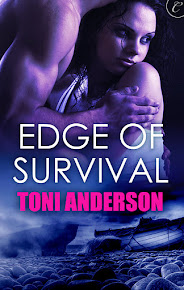 
Dr. Cameran Young knew her assignment wouldn't be easy. As lead biologist on the Environment Impact Assessment team, her findings would determine the future of a large mining project in the northern Canadian bush. She expected rough conditions and hostile miners—but she didn't expect to find a dead body her first day on the job.
Former SAS Sergeant Daniel Fox forged a career as a helicopter pilot, working as far from the rest of the human race as possible. The thrill of flying makes his civilian life bearable, and he lives by his mantra: don't get involved. But when he's charged with transporting the biologist to her research vessel, he can't help but get involved in the murder investigation—and with Cameran, who awakens emotions he's desperate to suppress.
In the harsh and rugged wilderness, Daniel and Cameran must battle their intense and growing attraction while keeping ahead of a killer who will stop at nothing to silence her…


I'm donating 15% of my royalties from this book to diabetes research.

ISBN: 978-14268-9263-9
Read an Excerpt
To Buy Links...
Carina Press| Amazon.com | Amazon.co.uk |Barnes & Noble | Audible.com  | iTunes
Check out Toni’s website for a list of current titles, her blog and Facebook Author Page for writing news and Twitter for constant nonsensical chatter. Come introduce yourself J.
Giveaway ends 10pm EST April 12th. Please supply your email in the post. You may use spaces or full text for security. (ex. jsmith at gmail dot com) If you do not wish to supply your email, or have trouble posting, please email justromanticsuspense @ gmail.com with a subject title of JRS GIVEAWAY to be entered in the current giveaway.