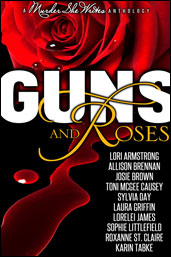 GUNS AND ROSES - A Murder She Writes Anthology
Congratulations to Karen C., the winner of the GUNS AND ROSES giveaway. Thank you to everyone who participated!
The talented authors from MURDER SHE WRITES share some of their favorite lines from their GUNS AND ROSES stories.

Roxanne St. Claire - PICK YOUR POISON – A BULLET CATCHER NOVELLA
When Bullet Catcher Benjamin Youngblood sets out to track and trap an assassin, he's forced to trust a sexy flower farmer who could be as dangerous as her homegrown poison.
Quote:
“But what if—”
His T-shirt came off so fast Callie sucked in a breath, then another when she saw what the striptease revealed. Muscles. Bare, cut, solid, masculine… muscles.
She attempted to swallow. “What are you doing?”
Reaching over the seat, he grabbed a white shirt, all folded up from the cleaners. “Dressing for work.”
Why I like it:
It's a surprise action -- he even surprised me.  I remember writing the scene and in the middle of an exchange as they are planning their next move, he whips off his T-shirt.  This is a novella and we have to move fast to establish physical attraction, but the act was completely in character and made perfect sense for the moment and what they are about to do.  And I liked his dry response.

Allison Brennan – ABOVE REPROACH
Sex crimes detective Selena Black puts her career and life at risk to prove that high-profile attorney Greg Keller is the brutal River City Rapist before he strikes again.
Quote:
When I looked at Keller, I saw evil, a twisted ugliness that overshadowed his clear blue eyes, aristocratic features, and square chin—a psychotic Ken doll that wanted to damage and deface all the Barbies out there.
Why I like it:
This line illustrates exactly what my heroine, sex crimes detective
Selena Black, is up against. Keller is a serial rapist who cuts the
cheek of each victim so he can see "his brand" when he encounters them
in public. It also shows that sex offenders aren't just ugly or scary,
that some of them are physically attractive and appear harmless, and
that Keller has both money, a powerful career, and friends in high
places adds to him being out of reach.

Sophie Littlefield – A PUNISHING NIGHT
While investigating the stabbing death of a student at his own alma mater, Detective Joe Bashir confronts painful memories and makes an intriguing new acquaintance.
Quote:
"The last men standing."
Why I like it:
My story deals in part with fraternity hazing. The victim in my story is a member of a fraternity that uses the sort of violent hazing techniques that are outlawed but unfortunately still take place on college campuses across the country, where young men (and women) are in danger of serious injury or death, but the culture of unity, toughness, and secrecy at work in these fraternities prevents them from seeking help. In my story, Detective Joe Bashir thinks of an injured young man as one of the "last men standing" because he endures unthinkable abuse at the hands of upperclassmen - right up until the moment that he snaps.

Josie Brown - THE HOUSEWIFE ASSASSIN'S BLOODY VALENTINE
CIA contract assassin Donna Stone's idea of Valentine's Day? A couples massage with her mission's leader Jack Craig--not breaking out of a Mexican prison, then stopping a massacre by an international terrorist cell.
Quote:
Along with the salt water sieving through the antechamber’s drainpipe is the last of El Chihuahua’s blood, some of his entrails, and my vomit.
Why I like it:
The setup: Black ops contract assassin named Donna Stone's mission is a prison break out: get "El Chihuahua," a notorious drug lord, off Isla María Madre, Mexico's island jail. Unfortunately during the breakout he is shot, and his blood attracts a shark. I love this line because it demonstrates two things: (1) On a mission, something will always go wrong; and (b) Donna is like the rest of us: human. Seeing the open, mutilated guts of dead person makes her just as queasy as it would make any of us.

Quote:
“She wants tangible proof of her suspicions, so we’ll give it to her.” He sighed again. “Looks like I’m on stakeout duty tonight. Marcia said Glen planned to work late and told her not to wait up.”
Just what Martinez had said to me the last few nights. Any desire to go home evaporated. “I can stay and help.”
Kevin’s gaze snapped to mine. “I thought you were antsy to leave and play kissy face with your man?”
Given my mood, I’d most likely punch Martinez in the kisser if I saw him. “And miss a chance to hear the old guy and the young tart squeaking the legs on the conference table? I’ll stick around just to make Viagra jokes.”
Why I like it:
Why I chose this: This is the perfect example of how Julie uses sarcasm to mask her fears about her relationship with Martinez and allows her to save face and hang out with her best friend/coworker, Kevin.

Laura Griffin – NIGHTFALL
Alone on an icy road at nightfall, Holly Henriksen puts her trust in a charming stranger and soon discovers he is keeping a dangerous secret.
Quote:
"He turned to look at her. In the porch light, she saw that he was tall and broad-shouldered. He could overpower her in a heartbeat if he wanted to, and she was about to enter an empty house with him."
Why I like it:
I like this point in the story because it highlights Holly's conflict. She wants to trust this man. She needs to trust him. But she senses he is keeping a secret from her. And he is.

Toni McGee Causey – BOBBIE FAYE’S WHACKED OUT, NO GOOD, REALLY SUCKY, HOT MESS OF A WEDDING
Bobbie Faye Sumrall, Cajun Contraband Days Queen, gun expert, and ultimate professional in being in the wrong place at the wrong time, absolutely positively does not want to go through with the wedding that Trevor's forcing her to agree to, but she soon finds out she has more important things to worry about--like surviving the plot to make her disappear when she's set up as a fall guy for the theft of a priceless religious icon.
Quote:
You waved a gun at her!”
“Just once. I didn’t shoot that annoying assistant, which, frankly, showed a lot of self-control. I want brownie points for that.”
Why I like it:
The whole exchange prior to and right after this is quintessential Bobbie Faye--all hyperbole and big gestures and rants, like Wile. E. Coyote going over the cliff and only realizing it a few seconds too late.

Sylvia Day – BLOOD AND ROSES                                                          When insurance investigator Anastasia Miller sets out to retrieve the rose-hued pink diamonds stolen in a recent heist, she finds herself working alongside former flame, deputy U.S. Marshal Jake Monroe-the man she loved enough to leave behind.
Quote:
He released her hand and shoved his own into his pocket. A moment later, he was sliding a diamond onto the ring finger of her left hand, a square cushion-cut that caught the light of the moon shining through the gap in the shutters on the windows.
She swallowed hard, afraid to blink. "Jake-"
"I've been holding on to that for years. Now it's your turn."
Why I like it:
Jake and Ana have been separated for a decade, but they've never stopped loving each other. This exchange is so Jake. Just like that, he'll wipe the slate clean and pick up where they left off. He'll also strap on his gun and partner her on a job, even if it rides a fine line between legal and illegal.


Quote:
Cam snagged her arm, stopping her, and managed to duck when she took a swing at him.
“Let me go! I have to see her! I have to know that she’s really—”
“Trust me when I tell you that you don’t want to see her like that. Please. Mrs. Swensen. Listen to me. Don’t try to go in there again. It’s for the best.”
Teresa crumpled to the ground and wept.
He couldn’t do a damn thing but stand beside her and listen while she sobbed inconsolably.    Wishing he were anyplace else but here, watching a family’s life forever changed.
Why I like it:
Why I chose this: Cam is at such a loss by the tragedy, and dealing with the family makes him question why he's doing this job. He gets to a dark place and doesn't want to bring that home to his family.

Karin Tabke – REBEL ROSE
For Detective Cash Cantrell, hunting down a University serial killer is as routine as strapping on his gun each morning. Until he comes face to face with meddlesome coed, Rebel Yell Culpepper. He doesn't know if he should arrest her or kiss her, but one thing Cash knows for sure, Rebel is key to finding the murderer, and the killer knows it, too.
Quote:
"The cell phone still in her hand, she raised it to her ear and said, “Jami, I gotta call you back.” She set the phone down and smiled what she imagined was a sly seductive smile. ‘Coz truth be told, even in her incapacitated state, she couldn't ever recall seeing such a beautiful man in all her twenty-two years on earth. Even if he was pissed as hell that she’d just puked all over his shoes."
This lovely group of authors is awarding a copy of GUNS AND ROSES to one lucky commenter!


Giveaway ends 9pm EST April 11th. Please supply your email in the post. You may use spaces or full text for security. (ex. jsmith at gmail dot com) If you do not wish to supply your email, or have trouble posting, please email justromanticsuspense @ gmail.com with a subject title of JRS GIVEAWAY to be entered in the current giveaway.
Posted by Maureen A. Miller at 4:09:00 AM

Email ThisBlogThis!Share to TwitterShare to FacebookShare to Pinterest
Labels: Murder She Writes